The aim of this chapter is to describe the basic principles of dental local anaesthesia.

After reading this chapter you should have a basic understanding of the pharmacology and anatomy of dental local anaesthesia.

The main purpose of this book is to act as a practical guide to the use of local anaesthesia in dentistry. Before embarking on practical issues it is important to acquire a basic understanding of the pharmacology and anatomy of dental local anaesthesia. Anaesthesia is defined as a loss of sensation in a circumscribed area of the body by a depression of excitation in nerve endings or an inhibition of the conduction process in peripheral nerves. This definition includes all sensation. In dentistry it is pain sensation we want to eliminate. Loss of pain sensation is termed analgesia. The terms local anaesthesia and local analgesia are used almost synonymously in dental practice. As true anaesthesia may be produced on occasion following intra-oral injection, the former term is used in this book.

How is Local Anaesthesia Achieved?

Local anaesthesia may be obtained by a number of mechanisms. Traumatic severance of a nerve will produce it. This may occur after damage to the lingual nerve during third molar surgery. This is not always reversible. In order to be acceptable for clinical use a reversible method is required. Local anaesthetic drugs achieve this goal. Although the mechanism of local anaesthetic action is complex it can be explained in a straightforward way. A nerve transmits information along its length by producing a change in the electrical gradient across the nerve cell membrane (Fig 1-1). At rest the inside of the nerve cell is negatively charged compared to the outside. When the nerve is excited to the so-called “firing” level this polarity changes. The reversal in electrical charge is the signal that is transmitted along the nerve. This change in polarity is principally due to the rapid entry of positively charged sodium ions into the cell. At rest the cell is impermeable to sodium ions. Stimulation causes a conformational change that permits the inward passage of these positive ions. Thus, transmission is dependent upon sodium ion entry. This occurs at the sodium channel. Local anaesthetics work by inhibiting the passage of sodium into the nerve cell. In simple terms they act as chemical roadblocks to the transmission of electrical impulses. They achieve this by a combination of two mechanisms. First, there is probably a contribution to the effect by a non-specific expansion of the nerve cell membrane. This causes physical obstruction of the sodium channel. Secondly, and more importantly, local anaesthetics bind reversibly to specific receptors in the sodium channel. The binding site for the local anaesthetic molecule is exposed during a conformational change that occurs to the sodium channel during the refractory period of the firing cycle. During this period further stimulation of the nerve is ineffective in producing a signal. When the local anaesthetic binds to its receptor the sodium channel is maintained in the refractory conformation. A simplified diagrammatic representation of this action is shown in Fig 1-2. 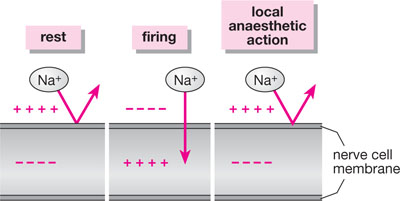 Fig 1-1 The major factor involved in nerve transmission is the differential concentration of sodium ions across the nerve membrane. Local anaesthetics block the entry of sodium into the cell and thus prevent “firing”. 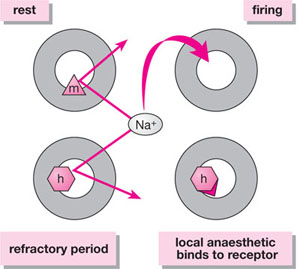 Fig 1-2 At rest, ion passage through the sodium channel is inhibited by a gate known as the “m” (for “make”) gate. This gate is open during “firing”. During the refractory period, another gate, the “h” (for “halt”) gate, closes blocking further sodium entry. The local anaesthetic molecule binds to a receptor on or close to the “h” gate maintaining the channel in the refractory conformation. 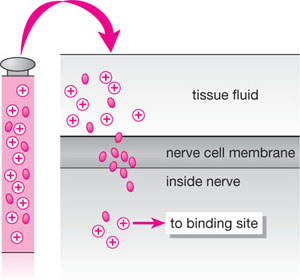 The relationship of these factors to the proportion of charged and uncharged molecules in solution is explained in the Henderson Hasselbach equation:

Another reason why local anaesthetics va/>