1: A Whistle-Stop Tour of the Periodontium

A Whistle-Stop Tour of the Periodontium

This chapter aims to provide the practitioner with a contemporary review of the important anatomical and micro-anatomical features of the periodontium.

At the end of this chapter the practitioner should be able to identify key clinical features that need to be assessed during the examination of patients’ periodontal tissues, since these features help inform diagnostic and treatment-planning processes.

The periodontal tissues form the supporting apparatus of the teeth. Their role is to protect the teeth from masticatory forces and infection, thereby facilitating normal oral function and preventing premature tooth loss. As modern medicine and standards of health have prolonged human life expectancy the periodontal tissues have to perform these functions over considerably more years than they were designed for, and therefore recession, sensitivity and tooth mobility are daily management problems for the dental practitioner and patient. Additionally, the nature and extent of systemic problems that are created by a compromised periodontal attachment (e.g. the established link between periodontal disease and cardio-/cerebro-vascular disease) and the chronic microbial stimulus associated with retaining teeth for longer, is only just being realised. The healthy periodontal tissues are identified in Fig 1-1 and comprise: The line at which the free gingiva becomes attached gingiva is usually visible, under conditions of pristine gingival health, as the gingival groove (Figs 1-1 and 1-2). However, since the majority of healthy mouths have detectable levels of marginal and interproximal plaque present, they also have a degree of inflammation present histologically, hence clinical health and pristine health are now recognised as different conditions. In clinical gingival health, it is accepted that there may be very mild inflammation present and the gingival groove is not therefore always discernible. 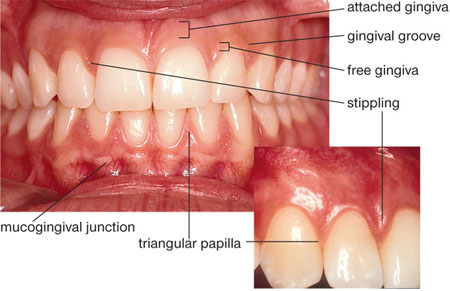 The free gingival tissues are separated from the crown of the tooth in health by the gingival sulcus or crevice, which on clinical probing varies from 0.5 to 3mm, for recommended probing pressures (20–25g or 0.2–0.25N) (Fig 1-3). If a healthy crevice is probed too firmly, the probe penetrates the base and enters the connective tissues. The crevice is washed out in health by gingival crevicular fluid (GCF) which flows out at a rate of 0.2μl per hour contributing 1ml per day to saliva. GCF is a serum transudate in health and is formed by serum moving passively from the arteriolar capillaries of the gingiva (Fig 1-4), through the gingival connective tissues and into the gingival crevice (Fig 1-5). In health, GCF contains everything serum contains, except for red blood cells, and, in addition, viable neutrophils (polymorphonuclear leucocytes; PMNLs) can be collected from it. During inflammation, the transudate becomes more like an inflammatory exudate and local components of that inflammatory process enter the GCF, which increases in flow rate and volume. 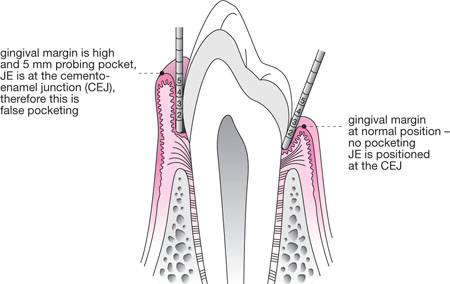 Fig 1-3 Schematic longitudinal section of a premolar and associated periodontal tissues, demonstrating a healthy sulcus and false pocketing arising due to overgrowth of the gingiva. 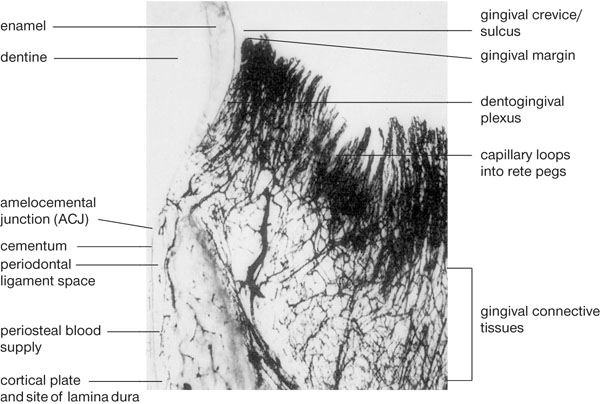 Fig 1-4 A black-and-white photomicrograph from the periodontium of a dog following injection of dye to demonstrate the rich gingival vasculature. Large vessels (arterioles) branch off a vast network of capillaries which form loops beneath the connective tissue rete ridges of the oral epithelium. The capillary network beneath the JE and SE is called the dentogingival plexus and serum from this plexus either returns to the post-capillary venules, or it enters the gingival crevice as GCF. 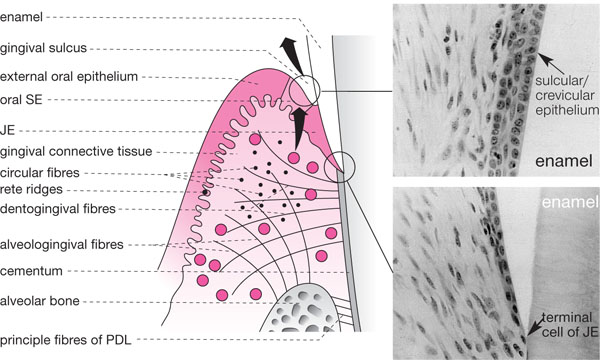 Fig 1-5 A schematic view of the gingivae demonstrating the gingival collagen fibre complexes. The SE and JE are also represented alongside in two photomicrographs demonstrating normal histology. Note how widely spaced the cells are and how they thin out forming a single “terminal cell” of the apex of the JE.

The gingival crevice is lined by highly specialised epithelia called sulcular epithelium (SE) and junctional epithelium (JE) (Fig 1-5). These normally adhere tightly to the crown, such that in pristine health no sulcus exists unless a probe is placed down from the gingival margin. The JE is unique as it forms an epithelial attachment (via hemi-desmosomes) to an internalised part of the skeleton (tooth with its investing alveolar bone). As enamel is derived from ectoderm embryologically (inner enamel epithelium) such a union is not unusual. However, once attachment loss has occurred (either recession or true pocket formation), the JE migrates onto cementum which is derived from mesenchyme. This results in a situation rather like a compound fracture of bone, where bone emerges from epithelium exposing the internal structures of the body to a hostile external environment. For this reason, the JE is permeable to GCF carrying the host’s defence cells (mainly PMNLs) and various other components of the inflammatory/ immune response, such as complement and antibody. The JE cells are widely spaced to facilitate this (Fig 1-5), but the downside of this arrangement is that bacterial products can also pass back into the gingival tissues and stimulate an inflammatory reaction. In health, this reaction is controlled and visible inflammation does not occur. However, as plaque accumulates subgingivally, the inflammation progresses within the gingival connective tissue underlying the JE and the latter eventually develops microscopic ulcers. When probed, blood can pass from the gingival connective tissues via the micro-ulcerations and can enter the crevice, creating the important clinical sign of bleeding on pr/>

Tags: Understanding Periodontal Diseases Assessment And Diagnostic Procedures In Practice
Jan 14, 2015 | Posted by mrzezo in Periodontics | Comments Off on 1: A Whistle-Stop Tour of the Periodontium
Premium Wordpress Themes by UFO Themes
WordPress theme by UFO themes