Plastics and rubbers, as they are generally called in everyday life, have the common property of being polymers. Polymers are long-chain molecules, consisting of many repeating units, as discussed already in Chapter 1.2. Polymers are not a 20th-century invention; they are, in fact, older than human beings themselves, and in one form or another are the basic constituents of every kind of living matter, whether plant or animal.

It is only relatively recently that we have begun to understand the structure of polymers and how to make them ourselves. Some examples of synthetic polymers, which are now everyday household names, are PVC (polyvinyl chloride), polyethylene, nylon and polystyrene.

Originally, the synthetic polymers tended to be regarded as substitutes for existing natural polymers, such as rubber and silk. Nowadays, such a wide variety of polymers can be produced that they have entered into every walk of life, satisfying needs that did not previously exist. Pertinent examples are medical applications, such as dialysis and oxygenator membranes, and dental applications such as filling materials.

The starting material for the production of a polymer is the monomer. In a material such as polyethylene, the repeating unit is a CH2 group, with many of these units joined together to form a long chain (Figure 1.5.1a). The monomer from which this polymer is derived is ethylene (Figure 1.5.1b).

Polypropylene is slightly more complex than polyethylene, in that the arrangement of the methyl groups can vary so that they:

A number of polymers based on vinyl monomers are presented in Table 1.5.1.

Some monomers and their polymers 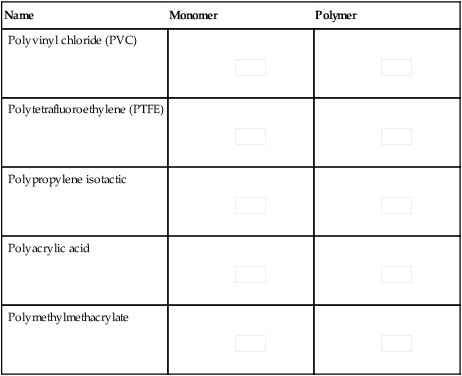 It should be noted that the chemical routes by which these different polymers are made are quite different, and that it is not a simple matter of modification to form one from the other. Each polymer has its own characteristic repeating unit, or ‘fingerprint’, and this unit is the basis for the widely differing properties of the polymers.

Silicon, being four-valent like carbon, provides the opportunity to form the backbone for the polymer, together with oxygen. An example of a silicone polymer is polydimethylsiloxane (Figure 1.5.3).

The monomers shown in Table 1.5.1 all have a double bond in common, which is opened up to allow the monomer to bond to a neighbouring monomer. This process of preparing polymers from monomers is called polymerization. There are two ways in which this may be achieved: addition and condensation.

Addition polymerization is defined as occurring when a reaction between two molecules (either the same to form a homopolymer, or dissimilar to form a heteropolymer) produces a larger molecule without the elimination of a smaller molecule (such as water).

The polymerization of a vinyl compound requires the presence of free radicals (•). These are very reactive chemical species that have an odd (unpaired) electron. The process of producing free radicals is described as activation. Activation occurs, for instance, in the decomposition of a peroxide.

This in turn can decompose to form other free radicals:

Such chemical species, known as initiators, are able to initiate vinyl polymerization, as described later, and are designated as R•.

Before initiation occurs, however, the benzoyl peroxide needs to be activated. This activation is achieved by the decomposition of the peroxide, due to the use of an activator, such as:

• Heat. When heated above 65°C, the benzoyl peroxide decomposes, as shown above. This is the method used in the production of acrylic resin denture bases (see Chapter 3.2).
• Chemical compounds. The benzoyl peroxide can also be activated when brought into contact with a tertiary amine such as n,n-dimethyl-p-toluidine (Figure 1.5.4). This method is employed in cold-cured acrylic resins, used, for example, in denture repairs, temporary restorations, orthodontic appliances and special trays (see Chapter 3.2). The same method is also used in chemically cured composite restorative materials, which consist of a base paste containing the tertiary amine activator and a catalyst paste containing the benzoyl peroxide initiator (see Chapter 2.2).
• Light. Yet another method for the creation of free radicals is employed by light-activated composites; these rely on either ultraviolet light or visible light as the activator of the polymerization reaction. In these instances, other initiators than benzoyl peroxide are employed.

Other forms of free radical production include the use of ultraviolet light in conjunction with a benzoin methyl ether, and visible light with an α-diketone and an amine (see Chapter 2.2).

The free radicals can react with a monomer such as ethylene and initiate the polymerization process as follows: