This chapter focuses on the molecular environment. Life is essentially a watery affair. Its aquatic origins are reflected in the high water contents of the cells and tissues even of terrestrial plants and animals. Mammalian cells contain some 70–75% of water, while soft tissues range from 65 to 80% in water content. Considering extremes, whole blood contains about 80% of water, while heavily mineralized compact bone may have only 15%. The lowest content is reached in dental enamel that, when mature, contains only 4% by weight of water. A man weighing 65 kg contains about 40 kg or liters of water of which 25 kg are within cells and 15 kg are extracellular. Water provides an all-pervading environment that surrounds and interacts with the whole gamut of biological molecules, small and large. Most biochemical reactions take place within or near this aqueous continuum; their very occurrence often depends upon the presence and special nature of water. Although water is commonplace and familiar, its apparent simplicity is deceptive.

The biological ubiquity of water

Life is essentially a watery affair. Its aquatic origins are reflected in the high water contents of the cells and tissues even of terrestrial plants and animals. Mammalian cells contain some 70–75% of water, while soft tissues range from 65 to 80% in water content. Considering extremes, whole blood contains about 80% of water while heavily mineralized compact bone may have only 15%. The lowest content is reached in dental enamel which, when mature, contains only 4% by weight (approximately 10% by volume) of water. A man weighing 65 kg contains about 40 kg (or litres) of water (i.e. 62%) of which 25 kg are within cells and 15 kg are extracellular. Water in the plasma accounts for only 3 kg the remaining 12 kg of extracellular water being interstitial and bathing the cells within the tissues. The approximate composition of the body is given in Table 3.1.

Approximate values for the chemical composition of the adult human body 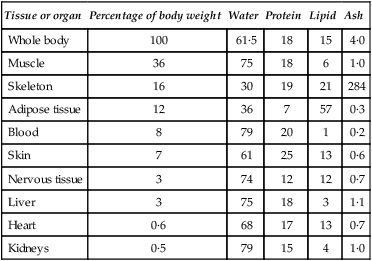 In these organs 0–5% of carbohydrate may also be present

Water thus provides an all-pervading environment which surrounds and interacts with the whole gamut of biological molecules, small and large. Most biochemical reactions take place within or near this aqueous continuum, indeed their very occurrence often depends upon the presence and special nature of water. Although water is commonplace and familiar, its apparent simplicity is deceptive.

The structure and properties of water

The structural form of complex molecules such as those of proteins depends upon water, which also acts as a directing and orientating influence on cell and tissue development. For its own part, water is not simple and homogeneous, its properties being greatly influenced by temperature and the molecular environment. The structure of pure water depends upon the ease with which its molecules form hydrogen bonds with each other. Water molecules may be considered as bent rods which by means of their two hydrogen atoms and the two lone pairs of electrons on the oxygen atom may participate in the formation of up to 4 hydrogen bonds with neighbouring water molecules. The maximum number is achieved in ice, which, as can be seen in snowflakes, is highly crystalline. Thus, in ice, water has a coordination number of 4 and the tetrahedral lattice has a highly regular pattern and an open structure of low density.

When ice melts, its continuous crystalline structure is partially broken down and becomes more complex. Water consists partly of free molecules and partly of ‘clusters’ or ‘icebergs’ in which a number of molecules are joined together by hydrogen bonds (Figure 3.1).

These clusters are short-lived, however, and soon break down to individual molecules while new clusters are continually being formed. Thus there is a dynamic equilibrium between molecules and clusters. The molecules inside the clusters are in the tetrabonded form while those on the surface of the clusters may have one, two or three hydrogen bonds with neighbouring molecules. Since the second hydrogen bond is formed more easily than the first, the formation of new clusters is a cooperative phenomenon between many molecules. Consequently there are no small units (dimers, trimers, etc.) but only rather large and uniform clusters of approximately spherical shape in equilibrium with individual molecules. The size of the clusters, and the proportion of the water within them, both decrease as the temperature rises; at 37°C, about two-thirds of the molecules are in clusters with approximately 40 molecules per cluster.

Interaction between water and biological molecules

As a result of interaction between water and organic substances including proteins, the structure of the water at the interface is modified (page 55) so that it differs from the structure of bulk water. This interaction may also modify the structure of the organic molecules. Consequently not only do biological molecules themselves take on a preferred configuration but they become surrounded by layers of water which behave in a different manner from the bulk of free water. Almost all of the large amount of water present in living cells is in the form of orientated multi-layers on the surfaces of cell proteins and the special properties of orientated water are intimately concerned with the chemical changes that are the basis of life.

The general action of anaesthetic agents is believed to result from their stabilizing effect on the pre-existing layers of orientated water molecules near protein molecules, including those of various cell membranes. Molecules of the anaesthetic penetrate into these layers where their hydrates have an ordering effect on the water structure and oppose the changes it normally undergoes as a result of the biochemical functioning of associated protein structures.

The mechanism whereby the carious process penetrates healthy dental enamel is intimately related to the structure and properties of the water within the ‘spaces’ of the enamel. This water is presumably partially orientated with respect to both hydroxyapatite crystals and the small amount of protein present. An appreciation of the significance of water in this rather special situation, however, still awaits further advances in our knowledge of both the physicochemical and biological behaviour of water.

Water as an ionizing solvent

Water is a good solvent for a variety of inorganic substances and also for many organic substances except for those that are predominantly hydrocarbon in nature. The specific solvent properties of water arise from its highly polar character and unequal charge distribution, which result from an excess of electrons near the oxygen atom and a deficiency near the hydrogen atoms. The molecule thus acts like a small dipole with its negative charge near the oxygen and its positive charge midway between the two hydrogen–oxygen bonds (page 14).

When salts dissolve in water they are almost completely dissociated into ions, e.g.

Because of their high local concentration of charge, ions would be very unstable were it not for the solvation effect whereby they become effectively hydrated. Thus, in the presence of water, the sodium ion exists in the form

and the chloride ion as

the arrow denoting donation of a free electron pair from the complete outer shell.

Ions that have more than one charge produce a larger local concentration of charge than the monovalent ions, e.g.

Thus ionic strength is equal to one-half of the sum of the products of the concentration of each ion and the square of its valency. Thus a 0·1 M solution of NaCl has I = 0·1, but 0·1 M MgSO4 has I = 0·4 and 0·1 M Na3PO4 has I = 0·6. It is the ionic strength of its environment that determines the solubility of a protein.

Hydrogen ions and the idea of acidity

There is something special about hydrogen ions which distinguishes them from all other ions and which has long been recognized in the chemical idea of ‘acidity’. Essentially, the hydrogen ion is a proton, i.e. a hydrogen nucleus that has lost its orbital electron, and exists in aqueous solution in the hydrated form, H3O+ formed by the water oxygen donating a lone pair of electrons to the proton

This hydrated form is sometimes referred to as a ‘hydronium’ or ‘oxonium’ ion but, provided it is understood that aqueous solutions are under consideration, the term ‘hydrogen ion’ (H+) is less confusing. In one respect hydrogen ions in solution seem to retain the characteristics of subatomic smallness and mobility associated with the proton; they are subject to two distinct transfer processes: (1) by diffusion like all other ions and (2) by transfer between adjacent molecules, often water molecules, by a mechanism which, though not completely understood, probably accounts for their high mobility.

HX is an acid, since on ionization it loses a proton, whereas the ion X− is a base since it has a tendency to acquire a proton and form HX. HX is the conjugate acid to base X− and conversely X− is the conjugate base to acid HX.

Different acids vary considerably in their strength. A strong acid is one that gives up protons readily whereas a weak acid gives them up reluctantly. A strong base acquires protons avidly and a weak base less readily. Strong acids have relatively weak conjugate bases (i.e. when the equilibrium of Equation (3·1) lies to the right), whereas weak acids have strong conjugate bases (equilibrium lying to the left).

The strength of an acid can be expressed as its dissociation constant, Ka, by applying the law of mass action* to the equilibrium of Equation (3·1). Thus the velocity of the reaction from left to right (V1) is given by the equation

where k1 is the velocity coefficient for the forward reaction and [HX] is the ‘activity’ of the acid HX which for dilute solutions, such as occur in living organisms, can to all intents and purposes be considered as equal to the concentration of the acid. Considering the reverse reaction, its velocity (V2) is given by

where k2 is the velocity coefficient of the reaction from right to left and [H+] and [X−] are the concentrations of hydrogen ions and the conjugate base respectively.

When equilibrium is reached the velocities (V1 and V2) of the forward and reverse reactions are equal, so from Equations (3·2) and (3·3)

by cross multiplying we obtain the definition of the acid dissociation constant Ka:

In Table 3.2 a number of acids of biochemical interest are listed, together with their dissociation constants and conjugate bases. There is a considerable range of acid strengths, represented by the dissociation constants. These range from values greater than unity for the very strong mineral acids to very small values indeed, where Ka involves large negative powers of ten, e.g. for the third ionization of phosphoric acid and for water itself. Examination of the formulae in the first column of the table shows that acids may be either electrically neutral molecules, anions with one or more negative charges (e.g. the ion

which is an acid because it has a tendency to lose a proton to form an electrically neutral ammonia molecule). Polybasic acids such as carbonic, citric and orthophosphoric acids have distinct values of Ka for each of their dissociable protons. These dissociation constants may lie close together as in citric acid, where they differ only by a power of ten, or spread far apart as in phosphoric acid, where the Ka values differ by factors of 105. The intermediate ions formed from polybasic acids can behave either as acids or bases according to their environment. Thus the dihydrogen phosphate ion

but as a base when it gains one to form orthophosphoric acid.