Replacing Molars in Both Jaws

Fig. 12.1.
This panoramic radiograph illustrates a case in which both techniques have been applied in a single patient. The maxilla was restored with an implant-restoration complex supported by three BOI implants and one compression screw (Construction Type 2h). The bridge in the posterior segment of the mandible is supported by only one strategic implant combined with natural tooth abutments (Construction Type 1e; see Sect. 12.4.1 for a definition of construction types) 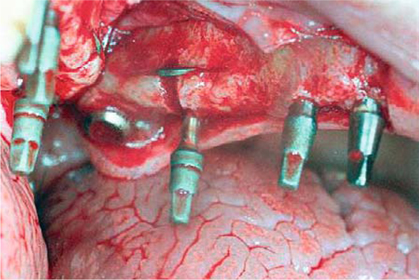 Fig. 12.2.
Intraoperative view. Enossal anchorage of one posterior segment without balancing support to the contralateral side is ensured by two compression screws before the sinus, one BOI implant under the sinus, and one tuberopterygoid screw (length: 19 mm). Scortecci presented this type of restoration as his multi-implant concept allowing immediate loading 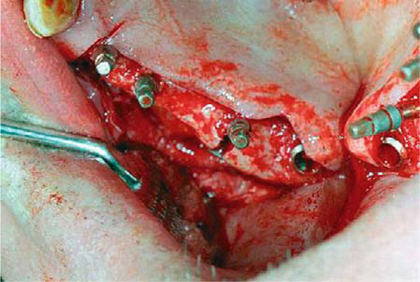 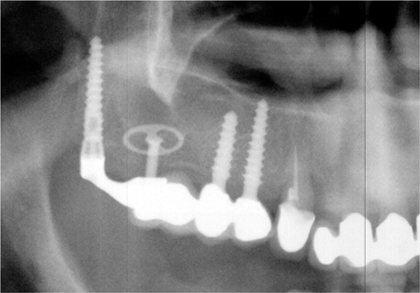 Fig. 12.4.
Close-up section of panoramic radiograph showing the same case as in Fig. 12.2 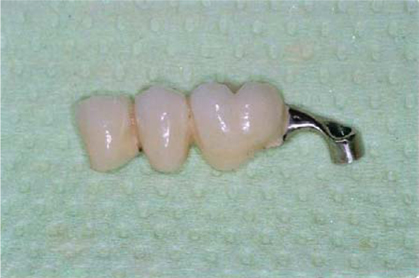 Fig. 12.5.
Prosthetic superstructure before insertion. The three anterior crowns were cemented. The technical abutment in position 18 was screwed from an oblique lateroanterior direction (in accordance with the distomedial insertion path of the tuberosity implant).
In our experience, having restorations supported exclusively by implants is a concept that works very well. However, when using BOI implants not secured against rotation, such as ED types, at least three implants will have to be provided to prevent rotation of the bridge. ID implants, while protected against rotation per se, may be subject to rotation one around the other if they are loaded immediately. This is why multidisk BOI implants should be preferred in these situations wherever feasible. At any rate, type 2h constructions are very successful clinically, and they can be loaded immediately if the corresponding indication exists
In our clinic, we refuse to insert removable restorations as a matter of principle, except in patients who are not eligible for implant therapy for systemic reasons. This is how we justify our policy: 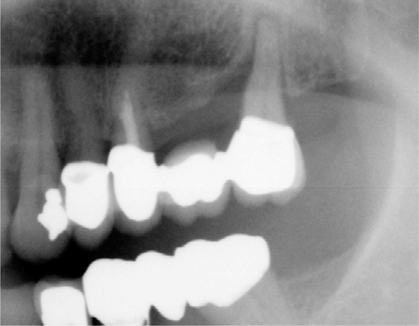 Fig. 12.6.
Panoramic radiograph of the left maxilla before extraction of tooth 27 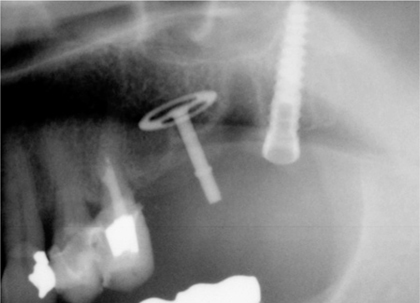 Fig. 12.7.
Panoramic radiograph after extraction of tooth 27 and insertion of one 19-mm tuberosity implant as well as one BOI implant in the anterior extraction area 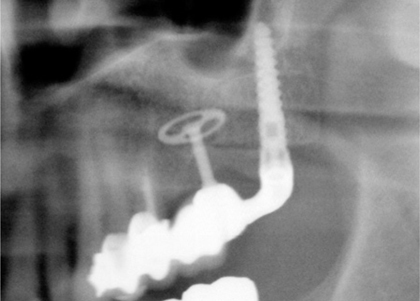 Fig. 12.8.
Situation after 24 months. Note that the tuberosity implant seems to have changed its position (viewing angle?) against the sinus structures. The distance from the BOI to the sinus also appears to have changed. The alveolar space of the extracted tooth has filled somewhat from the distal, but not from the mesial, aspect
It is precisely the masticatory function that dentists must aim to restore in any kind of restorative endeavour. Techniques such as bone augmentation or distraction, however, will considerably affect the masticatory function by requiring multiple surgical procedures and taking considerable time. The masticatory pattern will always tend to deteriorate as a result of avoidance mechanisms, conditions of long-term dysfunction and disuse atrophy of chewing muscles (Planas 1982).

We started our indication-based retrospective study by reviewing unilateral and bilateral cantilever situations. All consecutive implants that were subsequently included in prosthetic structures were reviewed. A classification of the restorative structures included in the study is provided in Tables 12.1 and 12.2.
Table 12.1.
Type 1 structures: one posterior implant, distal implants, cantilever situation at presentation
Table 12.2.
Type 2 structures: two posterior implants, distal implants, cantilever situation at presentation
The patients in this sample were 29–83 years old. The mean age of patients treated with Type 1 or Type 2 structures was 57.6 or 55.6 years, respectively. Type 1 structures included 93 implants (42.7%) in male patients and 125 implants (57.3%) in female patients. Type 2 structures included 56 implants (41.8%) in male patients and 78 implants (58.2%) in female patients. Inclusion of natural abutments was restricted: they were required to exhibit no major carious lesions whatsoever and minimum, if any, mobility. Some of the treatments performed are illustrated in this chapter. The question whether tobacco use is a prognostic factor for the outcome of BOI implants is moot, since none of the implants inserted among any of the smokers were lost. Due to the poorer bone quality in smokers, this subset of patients was characterized by a greater number of maxillary than mandibular Type 2 structures.
A total of 41 patients were able to get rid of their partial dentures as a result of implant treatment. All other patients either exhibited unrestored edentulous areas or underwent a single-step implantation procedure that included the extraction of teeth.

BOI implants were invariably used to create enossal anchorage points in all situations where the available bone volume was limited. They were used either alone or in combination with natural abutments and/or crestal implants.
All edentulous situations in the area of the first and second molars, with or without any additionally missing teeth in the posterior segment, were considered an indication for BOI implants. The delimiting mesial teeth were incorporated in the structure if they met the criteria outlined above. If they were unusable by these standards, the structure was planned to be supported by BOI implants alone or in combination with screw implants. If immediate loading was planned, compression screws were preferred as supplementary anchorage points for the bridge structures.

All restorations were performed with immediate loading. In practice, the prosthetic superstructure was placed within 12 days of inserting the implants. In cases where this structure was designed as a temporary restoration, the definitive ceramo-metal bridge was inserted no sooner than 6weeks later. Such temporaries were mainly used after single-step extraction/implantation procedures where the vertical and sagittal mucosal structures were expected to recede in an aesthetically relevant manner and extensive remodelling of the ridge was likely to occur. Any natural teeth to be incorporated in the structure were prepared immediately before implantation and fitted with a temporary restoration.
BOI implant designs were selected based on the requirement that they offered bicortical anchorage in the medial and lateral bone structures and that the threaded pin should be located at a safe distance from the mucosal structures. The polished upper segment of the threaded pin had to be accessible for brushing and flossing. Threaded pins of maximum length, depending on the anatomical situations, were selected to ensure that the implant-restoration system would be sufficiently elastic.
Other implant parameters included a disk diameter of 9–15 mm and a grade of between G4 and G8 depending on the available horizontal bone volume.

All implant sites were exposed by reflecting a mucoperiosteal flap from crestal and lateral direction so that all relevant structures could be well visualized. The incision was designed in such a way that the flap could be perforated and pulled over the threaded pin once the procedure was finished.
Care was taken to ensure that the horizontal bone volume was optimally utilized in the insertion procedure. Optimal anchorage takes precedence over any prosthetic considerations at this point.
For mandibular restorations, an attempt was made to position the threaded pin as far medially as possible to oppose the process of centrifugal resorption. Furthermore, the load-transmitting implant segments were placed at the level of the white line whenever possible to take advantage of the stress-related greater tendency of bone regeneration in that area. The width of the mandibular ridge is usually better preserved at this level, which comprises truly basal bone, than in a more superior position. All BOI implants were inserted such that the load-transmitting disks were slightly salient, at least on the vestibular side.
Figures 12.6–12.9 illustrate the surgical approach to creating a congruent implant bed. Figure 12.10 shows the osseointegrated implant at the 12-month follow-up.
The implant sites used for maxillary restorations included the position of the second molars as well as the area of the zygomaticoalveolar crest. Both regions are, much like the canine fossa, considered to be powerful «mastication pillars» well suited for load transmission (von Lüdinghausen and Pomaroli 1986). Sometimes, however, both anatomic structures are too far apart to be bridged by a single implant. Also, the anatomic situation in the area of the zygomaticoalveolar crest may be such that the volume of the vestibular cortical bone is unfavourably thin. In either case, we confined our quest for bicortical anchorage to the area of the second molar and used a lateral insertion path for all of these implants, without being able to anchor them from an oblique anterior direction in what used to be the zygomaticoalveolar crest. As an additional measure in these cases, the vestibular implant segment was adapted in cranial direction to the external sinus wall.
The area of the premolars was not used for implants whenever possible. Depending on prosthetic requirements, the eccentric threaded pins were placed in a more palatal or vestibular position by selecting the corresponding insertion path of the implant. If the surgical technique is adequate and the bone structures are well exposed, there is no need for extensive radiographic treatment planning. Templates and drilling aides are hardly useful with BOI implants. The BOI implantologist will always have a small selection of applicable implants handy.
In the distal mandible, the volume of the vestibular cortical structure was normally sufficient and was utilized accordingly. On the lingual side, it was attempted to reach the area of the mylohyoid line, which is protected against resorption by the local muscle attachment. The anatomy of the medial mandible can be readily explored during the procedure by palpation. To avoid inflicting any damage to the anatomic structures in that region, care should be taken that the submandibular fossa is not perforated. Like in the maxilla, the area of the mandibular premolars was not used for implants.
The load-transmitting implant disks were inserted in jaw areas where the cortical bone could be expected to provide the necessary support throughout the morphological changes associated with involution atrophy and functional adaptation in the postoperative course. Anyway, the extent and direction of bone remodelling in the jaw is determined not so much by the masticatory loads transmitted by the implant disk as by the flexural forces that develop from physiological movements. The most appropriate implant sites are in the basal bone segments, as these are capable of ensuring reliable support for implants in a lasting manner. The long-term success of implant therapy thus hinges on the selection of appropriate implant sites.
Perioperative treatment with antibiotics was not routinely administered, since a benefit of such prophylaxis in routine implant procedures (i.e. an effect on the success rate) has not been demonstrated (Gynther and Marb 1998). Antibiotics were therefore only administered to patients who required intraoperative coverage because of a concomitant disease (e.g. endocarditis).
Only gold members can continue reading. Log In or Register to continue

Tags: Principles of BOI
Oct 30, 2015 | Posted by mrzezo in General Dentistry | Comments Off on Replacing Molars in Both Jaws
Premium Wordpress Themes by UFO Themes
WordPress theme by UFO themes