Prevention is the key approach in the practice of paediatric dentistry and a cost-effective strategy benefiting the oral health of children for the rest of their lives. The common diseases affecting children are caries, malocclusion, trauma, developmental anomalies, and other medically related conditions. Among them, caries remains in the new millennium as the most prevalent childhood disease [1]. As a result, most of the preventive therapies commonly used in paediatric dentistry are mainly purposed for caries prevention. Laser-induced caries prevention has been proposed during the 1960’s [2]. By the end of the last century, the major mechanisms of this new preventive modality have been elucidated and verified in the laboratories. Despite the lack of data from large-scale clinical trials, the advent of this new clinical therapy for caries prevention is certainly foreseeable, with the compelling scientific evidence mentioned below.

I. Brief Review on Caries formation

Caries is one of the oldest and most prevalent diseases in human history. From the structural perspective, this diet-related infectious disease mainly involves two processes, namely the dissolution of enamel apatite crystals (eHAP) and the diffusion of ions [3-5].

Most of our enamel crystalline structure contains defects (such as point, line, and plane defects), impurities (such as carbonates, water, chloride, and others) and weak areas (such as the central portion of eHAP). All of them render enamel vulnerable to acid attack and serve as the initial sites for eHAP dissolution [7]. When the acid-producing bacteria get in contact with carbohydrates/sugar taken by children, the plaque pH quickly decreases within the first 5-10 minutes. When the plaque pH drops below the critical pH of enamel (around 5.5), the eHAP crystalline structure starts to break down and release ions, such as calcium, phosphate, and hydroxyl. These backbone ions of eHAP crystals will continue to be released to neutralize the hydrogen ions and acidity in the plaque, until the pH stops decreasing and rises back above the critical pH. This would then end the demineralization phase, as indicated in Figure 3.1.

When the pH rises above the critical value (5.5), the mineral ions can be taken up by the existing crystalline structure. As long as the pH stays above the critical pH, the conditions would favor formation of new enamel crystals and repair of old crystals. As indicated in Figure 3.1, this phase is called “remineralization phase”, where there is ample opportunity for “neo-formation of eHAP”, a purer HAP crystals. In the presence of fluoride, the “old” eHAP can be reformed into a “stronger” fluoroapatite (FAP) or fluoridated-HAP (fHAP). All of these “born-again” eHAP are more stable crystals, with a lower critical pH and thus greater acid resistance than the “old” eHAP. Should an acid attack comes again, these “born again” eHAP crystals can stand a greater acid challenge and would no longer be shakable as the old ones, until their lowered crystal pH is reached.

There are micro-diffusion channels in enamel, composed of a “super-highway system” (peri-prismatic space) and a “network of country roads” (intra-prismatic space), as featured in Figure 3.2. When bacteria produce acids, the hydrogen ions would have to go through the “super-highway” and then “country-road” systems to reach the eHAP crystals. After the eHAP crystals dissolve, the mineral ions would get released through these channels to the plaque covering the outer enamel surface. All the eHAP crystals around these channels have a good chance to take up these ions before they get lost away, as long as the local conditions favor remineralization, as mentioned above. 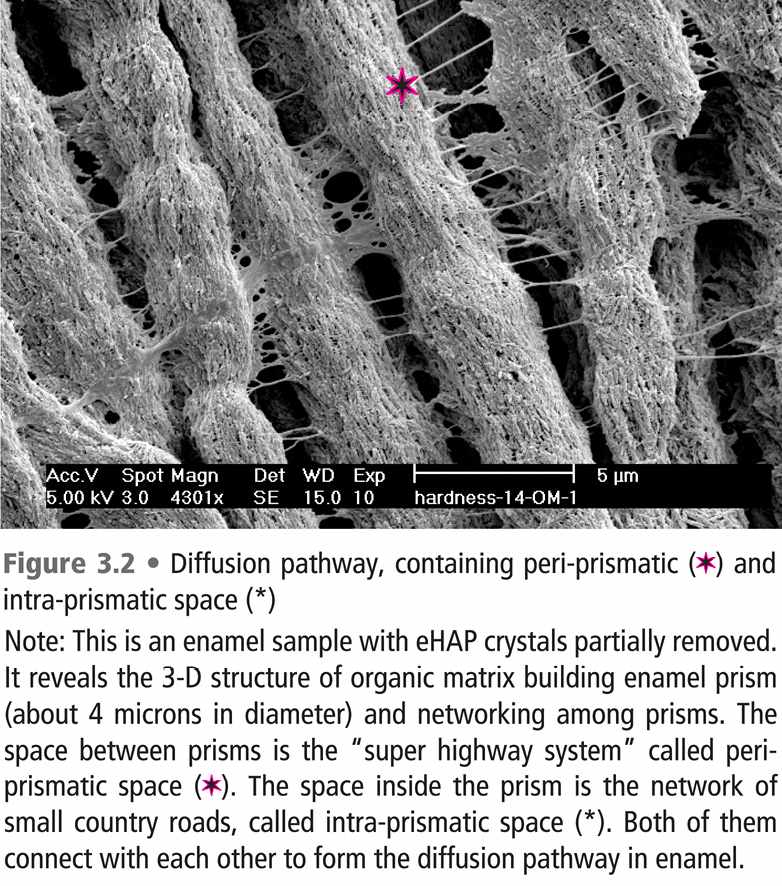 At the end of mineralization and before tooth eruption, most of organic matrix, having served as the scaffold to build the enamel prisms and the crystalline structure, would have been removed by enzymes [8]. What’s left is a tiny portion of organic matrix, comprising only less than 1% of enamel weight. However, this tiny portion does play an important role in controlling the enamel diffusion pathway [9]. Their presence decreases ions movement in enamel diffusion pathway, and proper laser treatments can modulate them to control the mineral loss, as mentioned in the following session.

Proper laser therapies can prevent enamel demineralization through “purifying” the enamel crystals and “retarding” enamel diffusion [9]. The formal mechanism contributes about 70% and the latter more than 25% of the total cariostatic laser effect. Furthermore, the photon energy of a proper laser treatment can increase the uptake of fluoride on the enamel surface and into the crystalline structure [10]. Even the erosive lesions can be prevented by a laser therapy with or without a topical fluoride treatment.

As mentioned above, the inherent crystalline defects render human eHAP crystals vulnerable to acid attack, which often comes with the “sweet temptation”. Light shining on enamel can transfer photon energy to “kick out” those impurities, re-arrange the crystalline ions, release the crystal lattice strain, and thus increase the structural stability in enamel [11-13]. As a result, the enamel solubility decreased, with the dissolution driving force reduced from K HAP=10 -121.4 to 10 -129.9 [14,15].

By removing the organic matrix, our research team has conducted a series of studies to investigate the exact role of organic matrix in laser-induced caries prevention.

With evidence from N2 porosimetry, it was clearly demonstrated that a proper laser treatment is able to “close the network of country roads”, which are of approximately 40 Å in diameter [16]. There is about 16.7% reduction of the total pore volume in irradiated enamel. However, this laser effect disappeared after removal of organic matrix. It is thus indicated that laser treatment can modify enamel organic matrix to totally or partially block the diffusion channels and thus the enamel diffusion.

The site-specific enamel diffusion coefficient has recently been quantified by using an old technique called FRAP (Fluorescent After Photobeaching) coupled with laser scanning confocal microscopy (CLSM). These results confirmed the ability of laser to reduce the enamel diffusion with intact organic matrix and the significant reduction of laser effect after removal of organic matrix [17]. Using a fluorophore penetrating a block of enamel tissue (FTS) characterized with LSCM, the “organic blocking theory”, as described above, was substantiated [17].

Fluoride has been used in dentistry for more than five decades and is a vital part of preventive treatment for children. Four mechanisms have been identified, including (1) inhibition of deminealization, (2) enhancing remineralization, (3) increasing the HAP crystallinity/stability, and (4) disturbing bacteria metabolism. The formal two mechanisms are the major ones, with the latter two as the minor ones.

Laser beams carry photon energy, with a promising potential to “kick” the fluoride ions into the eHAP crystalline structure. Incorporation of fluoride, a very tiny ion, into eHAP can help stabilize the structure, by replacing “impure” ions and/or filling in the gaps/defects. As a result, more fluoride incorporated into the eHAP crystalline structure may have a greater chance to form a better crystal structure, FAP or F-HAP, and to increase the capacity of fluoride reservoir to counteract the acid attack, through the first three aforementioned cariostatic mechanisms of fluoride.

Therefore, a suitable laser treatment may solve issues of substantivity and patient compliance, commonly related to some fluoride therapies. One of our recent studies, using Raman spectroscopy to characterize the enamel crystalline structure, has demonstrated that a 5-second laser treatment after a 4-minute topical fluoride treatment may create a similar, if not better, effect on enamel crystallinity, comparable to the control treated with a 72-hour topical fluoride treatment [18].

A combined CO2 laser and F treatment has demonstrated more than 98% reduction of mineral loss and more than 90% reduction of lesion depth, compared with the control group receiving no treatment [19]. Characterized by micro-CT, which requires literally no sample preparation and thus minimizes related bias, the mineral loss of the experimental group, treated with a combined Er:YAG laser and F therapy, was found to be 37% less than that of the control group, treated with only a topical F-treatment [20].

Employing Secondary Ion Mass Spectroscopy (SIMS), our research team has demonstrated a significant laser-induced fluoride uptake in enamel in both the “loosely-bound surface fluoride” and the “firmly-bound crystalline fluoride”, compared with that of a traditional 4-min NaF gel application [21].

As soft drinks becoming tremendously popular in the last century, the pediatric dentists are facing another formidable challenge, generally known as acidic soft drinks. Many popular soft drinks contain pH lower than 5.5, the critical pH for enamel. The direct contact of the acidic drink with enamel may quickly kick off the demineralization phase, faster than that triggered by the sweets, which would require time for bacteria metabolism. These erosive lesions can quickly go through enamel and affect dentin/root.

An in-situ study, loading the enamel section on a removal appliance and allowing the participants to rinse Coke four times a day for 5 minutes, has demonstrated 60% less erosive lesions in the irradiated samples than that of the non-irradiated control [22]. A similar study, taking the appliance out of mouth and soaked in one of the most popular soft drinks for 5 minutes three times daily, has demonstrated 40% preventive effect of the combined F-laser treatment on erosive lesion depth, compared with the control receiving only a topical fluoride treatment [23].

As the erosive lesions quickly progress through enamel, dentin would then be affected. Laser treatment alone has caused about 30% reduction of lesion depth in root dentin; however, with the help of fluoride, a 84.5% reduction of lesion depth has been demonstrated [24]. The laser-induced fluoride uptake in root dentin is also remarkable, with 37% increase in the “loosely-bound surface fluoride” and 400% increase in the “firmly-bound crystalline fluoride”, compared with those of the control group treated with only a topical fluoride treatment.

In summary, laser therapies may help pediatric dentists to prevent enamel/dentinal caries and erosive lesions through purification of eHAP crystals and retardation of diffusion pathway. Compared with a topical fluoride treatment, combined F-laser therapies can enhance fluoride uptake on enamel/dentin surfaces and in the enamel crystals, to reduce solubility and to serve as a fluoride reservoir with an excellent substantivity.

Since most of our studies have employed laser treatments with a sub-ablative energy density, it may be clinically safe and becoming, in the near future, an important treatment modality for pediatric dentists to cope with the increasing challenges of acidic soft drinks in the new millennium. 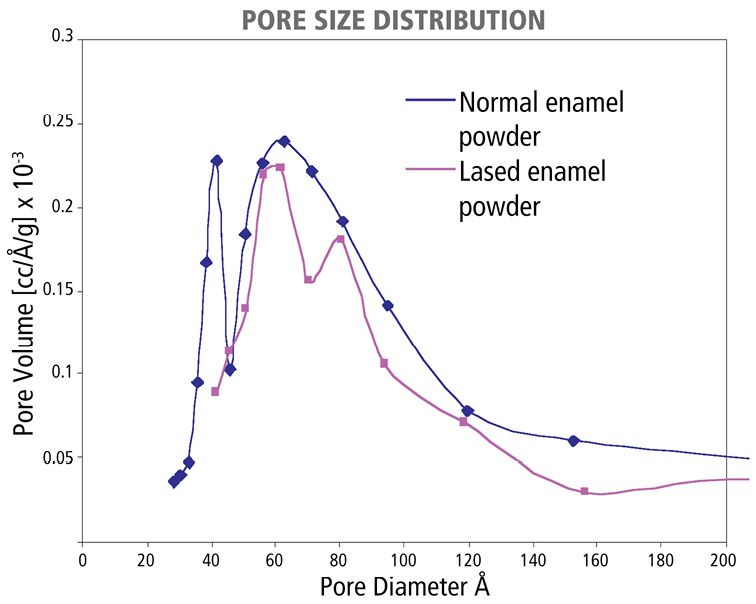 Figure 3.3 • Laser effect on the pore size distribution in enamel, featuring the dramatic reduction of small enamel pores around 40Å in diameter.