The current working group recommended the use of a three-step flowchart for the diagnosis of oral leukoplakia (Fig. 4.1) [6]. According to the flowchart, in the presence of possible etiological factors, including tobacco habits, the patient should be observed after not more than a somewhat arbitrarily chosen 2–4 weeks, which seems an acceptable period for observing possible regression after eliminating such factors. However, most leukoplakic lesions do not usually regress in such a short period, especially in smokers. Examples of white or predominantly white diseases of the oral mucosa carrying no increased risk for cancer development are listed in Table 4.3 [9].

Fig. 4.1
Schematic representation of the steps in diagnosis of oral leukoplakia [6]
Table 4.3
The most common white or predominantly white benign diseases of the oral mucosa and their main diagnostic criteria [9]
aThere isno consensus in the literature as whether to recognize a hyperplastic subtype of oral candidiasis: some prefer to these lesions as Candida-associated leukoplakia
bPalatal lesions in reverse smokers are considered potential malignant disorders
van der Waal [9] proposed that the term leukoplakia can be used at different levels of certainty (C-factor) as a clinical term (C1, diagnosed from a single visit, or C2, diagnosed by a negative results of elimination of etiologic factors) or a clinicopathological term (C3, confirmed pathologically on incisional biopsy, or C4, confirmed pathologically in a resected specimen) [9]. Amagasa et al. recommended biopsy for the accurate diagnosis of leukoplakia, especially for investigating the malignant transformation of leukoplakia, which is in agreement with other studies on the malignant transformation of leukoplakia [10].

With regard to the site of oral leukoplakia, many studies have reported the buccal mucosa as a common site [12, 13, 16, 24, 25, 30]. In India and other countries with tobacco chewing and/or smoking habits, the vast majority of leukoplakia cases were located on the buccal mucosa and labial commissure, with a few on the tongue or floor of mouth [20, 26, 27]. In Japan, however, the lower gum/alveolar ridge and the tongue were the most frequent sites followed by the buccal mucosa and upper gum/alveolar ridge [10], which is partially in agreement with other studies conducted in Japan [31, 34]. In the Netherlands, the tongue and floor of mouth were reported as the most frequently affected sites [29]. The sites commonly affected by oral leukoplakia may be the result of oral habits, especially tobacco smoking and/or various unknown causes.

Pindborg et al. [35] described in 1963 that speckled leukoplakia is often associated with epithelial dysplasia and carcinoma, and other researchers have reported their clinical types of oral leukoplakia with epithelial dysplasia and malignant transformation [12, 20, 29, 36]. In 1978, leukoplakia was divided into two main types: homogeneous and non-homogeneous [2]. Homogeneous leukoplakia was subclassified into flat, corrugated, wrinkled, and pumice-like, while non-homogeneous leukoplakia was subclassified into verrucous, nodular, ulcerated, and erythroleukoplakia (Table 4.4); these classifications were recognized by the WHO in 1994 [4, 5].
Table 4.4
Classification of oral leukoplakia [5]
At a WHO workshop held in 2005, the working group noted that nonhomogeneous varieties include speckled, nodular, and verrucous types; however, the working group consensus was that broadly dividing leukoplakia into homogeneous or non-homogeneous categories was imprecise and of limited value. Nevertheless, patients with mixed white and red plaques should be recognized as having a higher risk status, and such cases should be denoted as “erythroleukoplakia” [6]. Proliferative verrucous leukoplakia (PVL), which was reported in 1984 by Hansen et al. [37], was also recognized at the workshop. This form of leukoplakia is characterized by multiple, simultaneous leukoplakias as the disease is visibly multifocal and frequently presents across a wide area of the oral mucosa with most patients developing OSCC over long follow-up periods [37, 38]. Unfortunately, this type of leukoplakia cannot be determined in the initial stage and is diagnosed during or after its course.

It is largely accepted worldwide that a general disturbance of the epithelium is designated as “dysplasia” and that the potential for developing invasive carcinoma increases with the severity of dysplasia [5, 39]. Epithelial dysplasia is conventionally classified into mild, moderate, and severe including carcinoma in situ (CIS). Many reports have attempted to show a typical sample for each degree of epithelial dysplasia [5, 39, 40]. However, the degree of epithelial dysplasia is difficult to diagnose and several studies have reported great interexaminer and intraexaminer variability when assessing the presence or absence, as well as the grade, of oral epithelial dysplasia [41–43]. To increase the likelihood of agreement between oral pathologists by reducing the number of choices, a two-tier classification system (no/questionable/mild denoting low risk and moderate/severe denoting high risk) was considered at the 2005 Oral Cancer and Precancer Workshop coordinated by the WHO, with samples of each of the three grades of epithelial dysplasia [44].
The book World Health Organization Classification of Tumours (2005) recommended using the new concept of “epithelial precursor lesions,” which were previously termed “premalignant lesions,” and the terms “squamous intraepithelial neoplasia” and “squamous intraepithelial lesions” according to the Ljubljana Classification instead of “epithelial dysplasia” [45]. Although this classification was reported to be useful for predicting the malignant transformation of the hypopharynx and larynx [45–49], the WHO consensus group did not favor its use for oral mucosal lesions [44]. In addition, the current working group [6] did not actively accept the term “epithelial precursor lesions”, but adopted the new term “potentially malignant disorders.”
CIS of the oral mucosa is defined in the WHO classification as histologic changes involving the full thickness or almost the full thickness of squamous epithelium showing cellular features of carcinoma without stromal invasion [5, 39, 40, 50] and is in agreement with the definition proposed by the current working group [44]. Typically, most CIS of the upper aero digestive tract are nonkeratinizing, although keratinizing CIS can be encountered in the vocal cords or oral cavity [51]. Lesions with similar histological figures in the esophagus are considered to be squamous cell CIS (noninvasive squamous cell carcinoma) by Japanese pathologists and high-grade intraepithelial neoplasia by Western pathologists [52]. Izumo [53] in his review article noted that CIS of the oral mucosa show superficial maturation and differentiation. Some recent clinicopathological examinations in Japan have also revealed several variations of CIS of the oral mucosa [54] that are not included in the WHO classification [44, 45]. In the future, the suitability of the CIS criteria proposed by Japanese oral pathologists will be evaluated.
In relation between the clinical classification and epithelial dysplasia, Sugár and Bánóczy [55] reported in their three-tiered clinical classification in 1969 that leukoplakia erosiva and leukoplakia verrucosa were more often associated than leukoplakia simplex with epithelial dysplasia. In 1977, Amagasa et al. [56] developed a clinical classification system for oral leukoplakia based on lesions with or without elevation and with or without red components that was further developed in 2006 [10]. In this system, oral leukoplakia was classified into four clinical types: type I, a flat white patch or plaque without red components; type II, a flat white patch or plaque with red components; type III, a slightly raised or elevated white plaque; and type IV, a markedly raised or elevated white plaque (Table 4.5, Fig. 4.2a–d). With regard to epithelial dysplasia (Fig. 4.3a–c) in our classification system, type II leukoplakia was found to be significantly associated with epithelial dysplasia (Table 4.6) [10]. 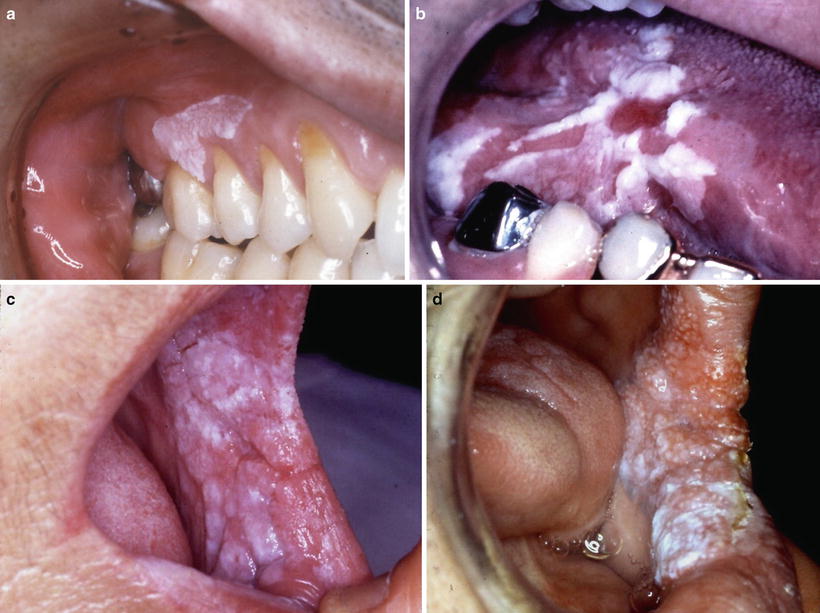 Fig. 4.2
Clinical features of leukoplakia can be classified into four types: type I (a) flat white patch on the of the maxillary gingival, type II (b) white patch and plaque with erosion on the tongue, type III (c) slightly elevated white plaque on the buccal mucosa, and type IV (d) markedly elevated white plaque with partly granular appearance on the buccal mucosa [10] 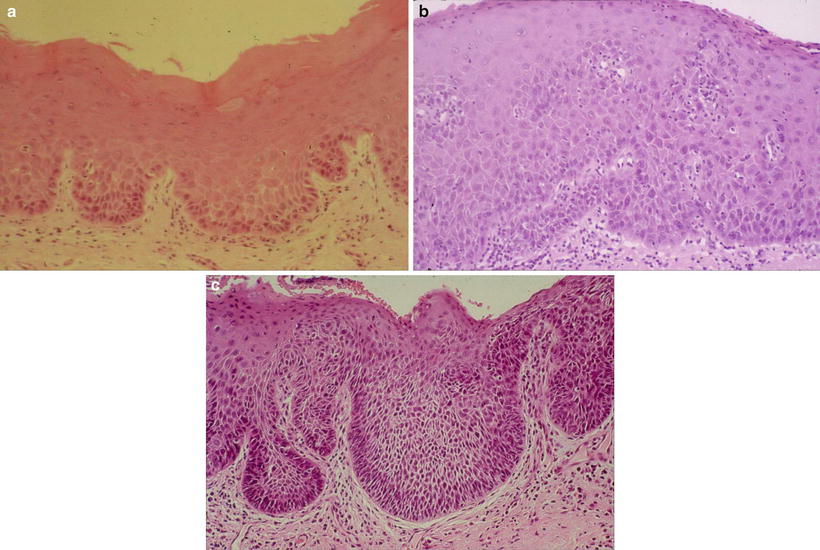 Fig. 4.3
Histopathological features of leukoplakia. (a) Mild dysplasia: slightly irregular epithelial architecture limited to the lower third of the epithelium. Basal–parabasal cells show hyperchromatic large nuclei and loss of polarity. (b) Moderate dysplasia: hyperplastic epithelium with increased number of polymorphic cells extends up to two-thirds of the epithelium, and cellular atypia is more pronounced with nuclear pleomorphism. (c) Severe dysplasia: the atypical basal-like and spinous-like cells occupy almost all epithelial layers. Squamous epithelium is of variable thickness with drop-shaped rete ridges and prominent cytologic atypia [10]
Table 4.5
Clinical classification of oral leukoplakia [10]
Table 4.6
Incidence of epithelial dysplasia in each clinical type of oral leukoplakia [10]
*Statistically difference (p < 0.01) between type II and type I, p < 0.05 between type I and types II, III, and IV

4.3.3.2 Diagnosis of Epithelial Dysplasia with a Colorimeter and Iodine Staining

Biopsy or a surgical procedure should always be performed for the diagnosis of epithelial dysplasia. However, diagnosis of this disease by a noninvasive procedure is desirable. The efficacy of vital iodine staining for the diagnosis of cancer or dysplasia has been reported in some papers [57–60]. In particular, Maeda et al. attempted to use a colorimeter after iodine staining to clarify the relationship between lesion color (i.e., the color of the unstained lesion) and histopathological findings after staining (Fig. 4.4a, b) [61] and found a significant color difference between lesions with moderate to severe dysplasia and those with mild to no epithelial dysplasia. Colorimetry with iodine staining for premalignant lesions may be useful for distinguishing moderate to severe dysplasia from mild to no dysplasia before biopsy. However, this combination method for PMD lesions is only suitable in the two-tier pathological classification system proposed by the working group.

Fig. 4.4
Leukoplakia on the lateral border of tongue, showing dull border before 3 % iodine staining (a) and showing a clear border after staining (b) [87]
Maeda et al. also measured the deviation of the macroscopic and histopathological boundary of oral leukoplakia after iodine staining. The histopathological boundary of the lesions with epithelial dysplasia was at most 4.36 mm beyond the macroscopic boundary, suggesting that PMDs should be surgically removed with a safety margin >5 mm after iodine staining [62].

Development of OSCC in patients with oral leukoplakia is a serious problem; however, knowing the natural history of oral leukoplakia is also important for both aggressive and conservative treatment of oral leukoplakia (Fig. 4.5a–e). Mehta et al. reported that 42.5 % of untreated leukoplakias disappeared within 5 years and 45.3 % within 10 years in persons who chewed tobacco, whereas 41.5 % of untreated lesions remained unchanged in 5 years and 31.6 % in 10 years in smokers in India [20]. During follow-up of patients in India, approximately 30–40 % of oral leukoplakias had decreased in size or disappeared, 30–60 % remained unchanged, and 11 % had increased in size [18–20], and regression was more frequently observed in tobacco chewers and pipe smokers than in those who smoked cigarettes [63]. 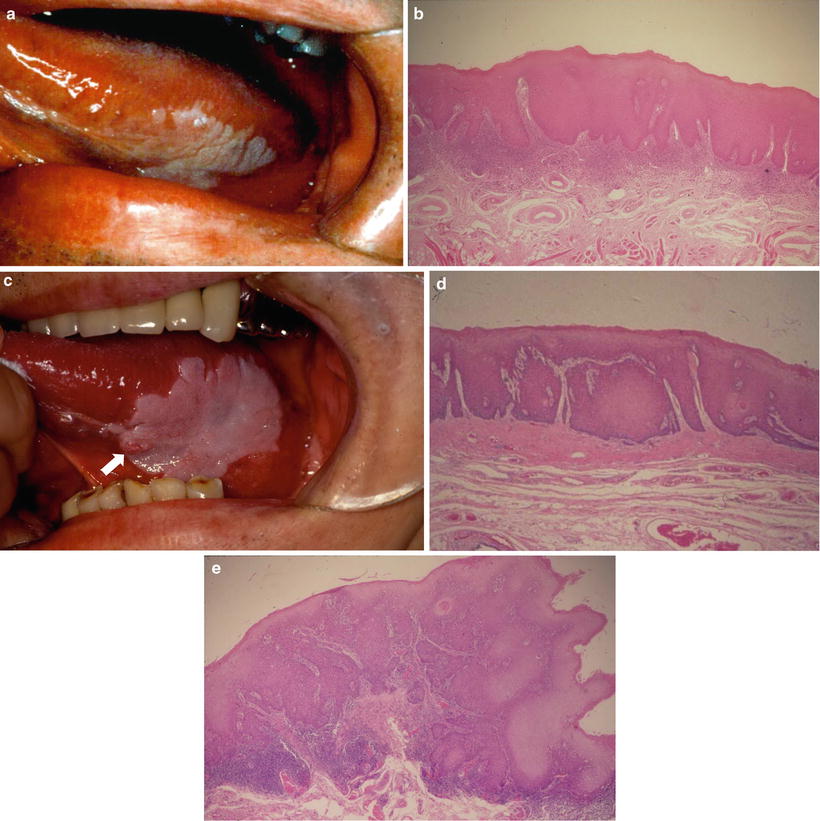 Fig. 4.5
Leukoplakia on the tongue showing a flat white plaque (a) and a biopsy specimen of the leukoplakia showing hyperplasia with moderate epithelial dysplasia (b). Seven years later without any treatment, a small-red-exophytic growth developed at the white plaque (↑) (c), a resected material specimen showing sever epithelial dysplasia (d) with early invasive squamous carcinoma (e) [87]
On the other hand, during follow-up periods of 1–10 years for 248 patients with leukoplakia in Denmark, lesions disappeared in 43 (20.1 %), decreased in size in 38 (17.8 %), and increased in size in 7 (3.3 %) [36]. Silverman reported that lesions in patients in the United States decreased or disappeared in 49 of 133 current smokers (37 %), in 22 of 50 past smokers (44 %), and in only 2 of 74 nonsmokers (3 %) [28]. Including the above reports, approximately 20–37 % of lesions completely disappeared after eliminating the causative factors, including a reduction in tobacco consumption or abstinence; 20–50 % or more decreased in size; and only 10 % or less increased in size in developed countries [28, 64, 65]. However, similar decreases in the number or size of oral leukoplakias were not observed in Japan during follow-up [10, 11].