Epithelial odontogenic tumours are supposed to be derived from odontogenic epithelium: dental lamina, enamel organ and Hertwig’s root sheath. As there is no contribution, either proliferative or inductive, from the odontogenic mesenchyme, these lesions do not contain dental hard tissues or myxoid tissue resembling the dental papilla.

Ameloblastomas closely resemble the epithelial part of the tooth germ. They behave aggressively locally, causing a large irregular bone cavity on radiographic examination, but do not metastasise (Fig. 11.1a, b). It is the most common odontogenic tumour [4].

Fig. 11.1
(a) Panoramic radiograph showing large and ill-defined radiolucency in right mandible. (b) Cut surface showing gross appearance of ameloblastoma. Note destruction of jaw bone and external resorption of the involved tooth roots. Photomicrograph showing plexiform (c) and follicular (d) type ameloblastoma. Especially the epithelial nests in the follicular type show close similarity to the enamel organ of the tooth germ in the cap and bell stage. Compare with Fig. 1.3
Ameloblastomas consist of either anastomosing epithelial strands and fields or discrete epithelial islands. The former pattern is called the plexiform type, the other the follicular (Fig. 11.1c, d). Both may occur within one and the same lesion. The peripheral cells at the border with the adjacent fibrous stroma are columnar with nuclei usually in the apical half of the cell body away from the basement membrane. The cells lying more centrally are fusiform to polyhedral and loosely connected to each other through cytoplasmic extensions. At the periphery of the lesion, the tumour infiltrates into the adjacent cancellous bone. The lower cortical border of the mandible and the periosteal layer usually expand, but will not be perforated, the periosteum in particular forming a barrier [5]. Spread into soft tissues is highly unusual; a tumour combining this feature with an ameloblastic appearance probably is an ameloblastic carcinoma (see Sect. “Ameloblastic Carcinoma”). Mitotic figures may occur within the peripheral columnar as well as in the stellate ­reticulum-like cells (Fig. 11.2). In the absence of cytonuclear atypia and with a ­normal configuration, they are without prognostic significance. 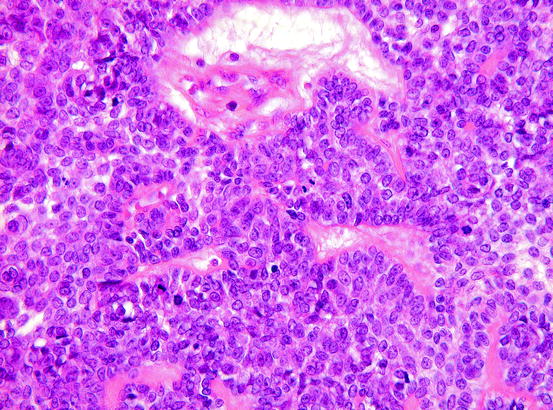 Fig. 11.2
Mitotic activity in an ameloblastoma without cytonuclear atypia. This feature should not be interpreted to indicate malignancy
Acanthomatous and granular cell type ameloblastoma are variants of follicular ameloblastoma with squamous metaplasia and granular cells, respectively. If ­keratinisation is abundant, leading to large cavities filled with keratin, lesions are called keratoameloblastoma. In these tumours, acantholysis may lead to a pseudopapillary lining that characterises the variant called papilliferous keratoameloblastoma. The basal cell (basaloid) ameloblastoma is composed of nests of basaloid cells with a peripheral rim of cuboidal cells and does not display a well-developed, loose oedematous centre. Desmoplastic ameloblastoma shows a dense collagenous stroma, the epithelial component being reduced to narrow, compressed strands of epithelium. When these strands broaden to form larger islands, a peripheral rim of dark-staining cuboidal cells and a compact centre in which spindle-shaped epithelial cells assume a whorling pattern may be discerned (Fig. 11.3). Within the stromal component, active bone formation can be observed. Unicystic ameloblastoma represents a cyst that is lined by ameloblastomatous epithelium [4]. This epithelium may proliferate to form intraluminal nodules with the architecture of plexiform ameloblastoma. Downward proliferation of this epithelium may lead to infiltration of the fibrous cyst wall by ameloblastoma nests. Sometimes, the cyst lining itself lacks any features indicative of ameloblastoma, these being confined to intramural epithelial nests [4]. Inflammatory alterations may obscure the specific histologic details to such an extent that none are left. Unicystic ameloblastomas in which the ameloblastomatous epithelium only lines the cystic surface can be treated in a more limited way than those in which there is also epithelial downgrowth into the fibrous cyst wall. The latter have to be treated in the same way as the conventional solid and multicystic ameloblastomas and require removal including a rim of surrounding tissues (Fig. 11.4a–e). 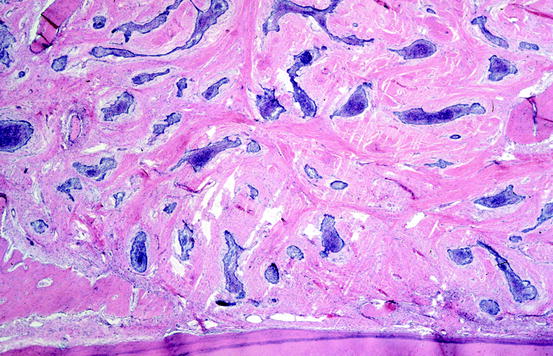 Fig. 11.3
In desmoplastic ameloblastoma, the resemblance of the epithelial component to the enamel organ is less obvious

Fig. 11.4
(a) Radiograph showing radiolucency with scalloped outline in left mandible, after histological examination diagnosed as unicystic ameloblastoma. (b) Epithelial lining showing basal palisading and oedema in the more superficial epithelium thus resembling stellate reticulum. (c) Occasionally, the oedema is extensive and causes separation between basal and more superficial epithelium. (d) In case of squamous metaplasia, basal hyperchromasia may be the only clue for diagnosing unicystic ameloblastoma. (e) In case of intramural epithelial proliferation, an apparently unicystic ameloblastoma should be treated more aggressively like a conventional ameloblastoma
Epithelial nests resembling ameloblastoma may be found in ameloblastic fibromas and calcifying odontogenic cysts, lesions to be discussed under the appropriate headings (see Sects. “Ameloblastic Fibroma” and “Calcifying Odontogenic Cyst”). Also, epithelial nests in the dental follicle that surrounds an impacted tooth and in the wall of odontogenic cysts may mimic ameloblastoma [6–8].
Sometimes, ameloblastomas present themselves as soft tissue swellings occurring in the tooth-bearing areas of the maxilla or mandible without involvement of the underlying bone. This peripheral ameloblastoma should not be confused with intraosseous ameloblastomas that spread from within the jaw into the overlying gingiva.

The calcifying epithelial odontogenic tumour consists of sheets of polygonal cells with ample eosinophilic cytoplasm, distinct cell borders and very conspicuous intercellular bridges. Nuclei are pleomorphic with prominent nucleoli; cells with giant nuclei and multiple nuclei are also present. Mitotic figures, however, are absent. Clear cell differentiation may occur. The epithelial tumour islands as well as the surrounding stroma frequently contain concentrically lamellated calcifications. The stroma contains eosinophilic material that stains like amyloid (Fig. 11.5a, b). Also, stromal deposits of bone and cementum may occur. There is no encapsulation. The tumour grows into the cancellous spaces of the adjacent jaw bone while causing expansion and thinning of the cortical bone. Sometimes an impacted tooth may be present centrally within the tumour mass (Fig. 11.6) 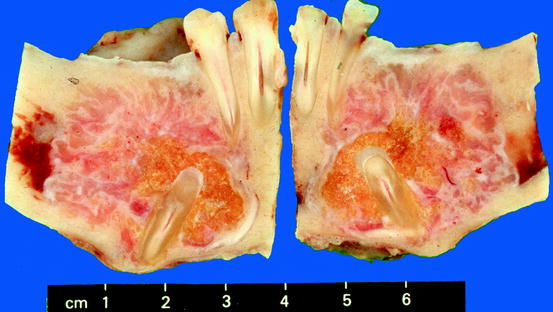 Fig. 11.6
Cut surface of jaw specimen with calcifying epithelial odontogenic tumour. The tumour surrounds an impacted tooth and is not encapsulated

Grossly, the adenomatoid odontogenic tumour is a cyst that embraces the crown of the involved tooth (Fig. 11.7a, b). The lesion consists of two different cell populations: spindle-shaped and columnar. The spindle-shaped cells form whorled nodules that may contain droplets of eosinophilic material. A lattice of thin epithelial strands usually connects these nodules to each other. The columnar cells line duct-like spaces with a lumen either empty or containing eosinophilic material and may form curvilinear opposing rows with interposed eosinophilic material (Fig. 11.8a, b). In the stroma, there are large aggregates of eosinophilic hyaline material, which is judged to be either a dysplastic form of dentin, cementum or a metaplastic reaction of the stromal tissue. Also, concentrically lamellated calcified bodies similar to those seen in calcifying epithelial odontogenic tumours may occur. In some adenomatoid odontogenic tumours, areas of eosinophilic cells with well-defined cell boundaries and prominent intercellular bridges similar to those observed in the calcifying epithelial odontogenic tumour are seen. They do not influence the biologic behaviour of this tumour and are considered to be part of its histologic spectrum.

Fig. 11.7
(a) Clinical appearance of adenomatoid odontogenic tumour. Cystic swelling occupies the jaw area where an incisor tooth should be present. (b) Radiographs showing large cystic lesion with displaced teeth

Fig. 11.8
Photomicrograph showing epithelial nests connected by epithelial strands as is typical for adenomatoid odontogenic tumour (a). At higher magnification, the alternation of spindle cells and lumen-lining columnar cells can be observed (b)

Squamous odontogenic tumour is composed of islands of well-differentiated squamous epithelium surrounded by mature fibrous connective tissue. There is no cellular atypia. There is spinous differentiation with well-defined intercellular bridges, but keratinisation is unusual. In the epithelial islands, cystic degeneration and calcification may occur (Fig. 11.9). Invasion into cancellous bone may be present. The absence of cytonuclear atypia rules out well-differentiated squamous cell carcinoma, and the absence of peripheral palisading of columnar cells excludes ameloblastoma as alternative diagnosis. Sometimes, intramural epithelial ­proliferation in jaw cysts may simulate squamous odontogenic tumour (see Sect. “Radicular Cyst”). The lesion may cause loosening of the teeth involved. 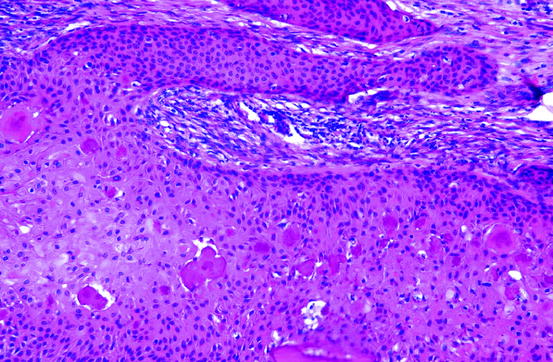 Keratocystic odontogenic tumour is more universally known as odontogenic keratocyst but now renamed as there is sufficient evidence that this lesion actually represents a cystic neoplasm [9]. This lesion shows a thin connective tissue wall lined by stratified squamous epithelium with a well-defined basal layer of palisading columnar or cuboidal cells and with a superficial corrugated layer of parakeratin. Mitotic figures can be identified in parabasilar and midspinous areas. The underlying cyst wall may contain tiny daughter cysts and solid epithelial nests. Also, epithelial proliferations similar to ameloblastoma have been reported. When extensively inflamed, this lesion loses its typical histologic features, then only showing a non-keratinising stratified epithelium exhibiting spongiosis and elongated rete pegs supported by a connective tissue containing a mixed inflammatory infiltrate (Fig. 11.10a–c). Multiple keratocystic odontogenic tumours occur within the context of the nevoid basal cell carcinoma syndrome [10].

Fig. 11.10
Keratocystic odontogenic tumour. (a) Radiograph showing extensive bone loss in left mandible. (b) Slice from same case as shown in (Fig. 11.10a) to illustrate the way the lesion has hollowed out the mandible. (c) Photomicrograph showing cyst lining typically composed of columnar basal cells and a corrugated parakeratinising surface

Mesenchymal odontogenic tumours are derived from the ectomesenchymal part of the tissues that participate in the development of teeth and periodontal tissues. Odontogenic epithelial rests may be part of the histologic picture they show, but represent only structures fortuitously engulfed by tumour tissue. They have no neoplastic or inductive potential.

Odontogenic myxomas are radiolucent lesions with an irregular outline (Fig. 11.11). They consist of rather monotonous cells with multipolar or bipolar slender ­cytoplasmic extensions that lie in a myxoid stroma. Nuclei vary from round to ­fusiform in appearance. Binucleated cells and mitotic figures are present, but scarce. Occasionally, the lesion contains odontogenic epithelial rests. They are a fortuitous finding without any diagnostic or prognostic significance. The lesion spreads into the jaw bone without any encapsulation, thereby engulfing neighbouring cancellous bone (Fig. 11.12a–c). 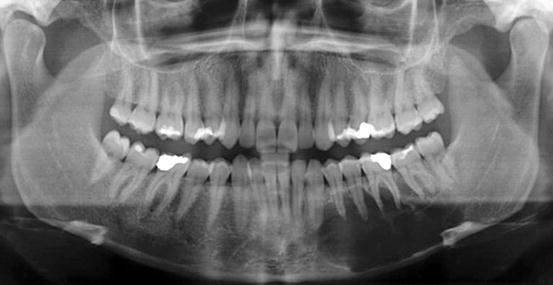