Radicular cysts are located at the root tips of teeth in which the pulp has become necrotic, mostly due to advanced tooth caries (Figs. 10.1, 10.2 and 10.3). They arise from the epithelial rests of Malassez and develop when pulpal inflammation has led to the formation of a periapical granuloma. Remnants of Hertwig’s epithelial root sheath lying within this granuloma may proliferate due to the inflammatory stimulus and through subsequent liquefaction necrosis in the centre of these enlarged epithelial nests, a fluid-filled cyst with an epithelial lining forms (Fig. 10.4a, b). 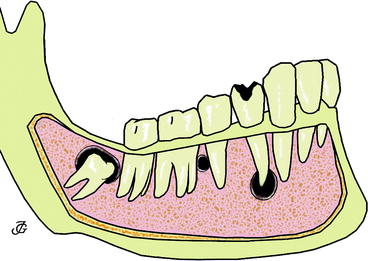 Fig. 10.1
Schematic drawing to illustrate anatomical relationship between cysts and teeth. From left to right: dentigerous cyst surrounding crown of unerupted molar tooth, lateral periodontal cyst lying between roots of healthy teeth and radicular cyst at the root tip of a tooth with carious decay 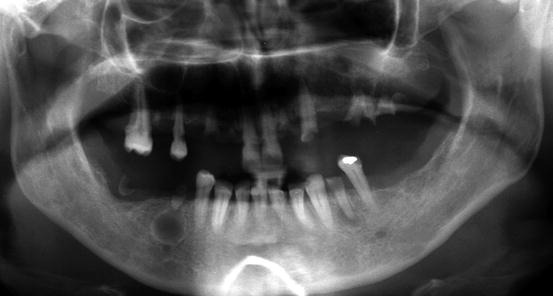 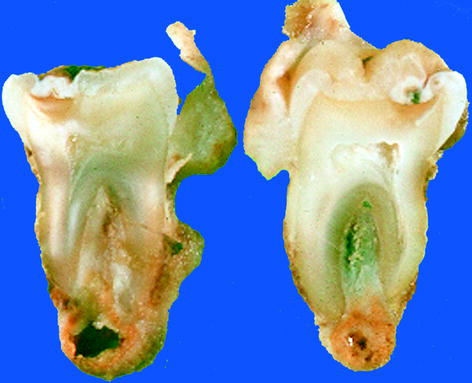 Fig. 10.3
Gross view of radicular cyst. Thick-walled cyst at the apex of a bisected tooth

Fig. 10.4
Initial stage of radicular cyst. Epithelial proliferation in periapical abscess. (a) Overview with root surface at left side. (b) Higher magnification to show epithelial nest embedded in infiltrate of neutrophilic granulocytes
Radicular cysts are lined by non-keratinising squamous epithelium. This epithelial lining may be thin and atrophic, but, especially in case of inflammatory changes in the underlying connective tissue, the cyst epithelium shows proliferating rete processes that may form arcades. In many cysts, cholesterol clefts with adjacent giant cells occur. Within the cyst epithelium, hyaline bodies of various sizes and shapes may be present (Fig. 10.5a–c). The specific nature of these so-called Rushton bodies is unclear [2]. Sometimes, they may be confused with the intraepithelial ghost cells that are found in the calcifying odontogenic cyst (see Sect. “Calcifying Odontogenic Cyst”). Occasionally, the lining squamous cells are admixed with mucous cells or ciliated cells. Sometimes, the histologic pattern of the radicular cyst is complicated by extensive intramural proliferation of squamous epithelial nests of varying size, thus mimicking a squamous odontogenic tumour (Fig. 10.6a, b) [3] (see Sect. “Squamous Odontogenic Tumour”).

Fig. 10.6
Intramural epithelial proliferation in wall of radicular cyst. (a) Overview and (b) Detail. This may mimic squamous odontogenic tumour
The histologic appearance of the radicular cyst is rather unspecific. The same pattern may be shown by other jaw cysts, especially the dentigerous cyst, in particular when the picture is dominated by inflammatory changes, thus obscuring the more specific features of the other cyst types. However, the clinical presentation, location at the root tip of a nonvital tooth, leaves little room for other diagnostic possibilities.
When complicated by inflammation, radicular cysts may be characterised by pain and swelling. However, they may also be asymptomatic and only detected by radiographic examination of the dentition. In those cases, one sees a radiolucency at the root tip of a tooth. In case of additional lateral root foramina, the cyst may also lie in a lateral position. Tooth extraction or apical resection with curettage of the periapex usually is adequate treatment.

Paradental cysts are located at the lateral side of the tooth at the border between enamel and root cementum (Fig. 10.7). They are secondary to an inflammatory process in the adjacent periodontal tissues that induces proliferation of neighbouring odontogenic epithelial rests, similar to the pathogenesis of the radicular cyst [4]. Histologically, they resemble the other inflammatory odontogenic cysts, the distinction being made by their specific clinical presentation and the vitality of the involved tooth. They are rare lesions, accounting for less than 3 % in major series [5]. Treatment consists of excision with or without concomitant extraction of the involved tooth [6, 7]. 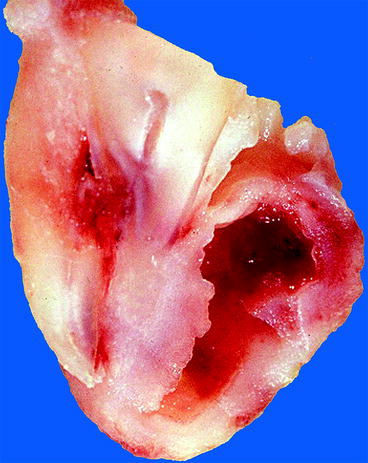 A dentigerous cyst (synonymous term follicular cyst) is a cyst that surrounds the crown of an unerupted tooth and is attached to the neck of this tooth (Fig. 10.8).

Fig. 10.8
Radiograph showing dentigerous cyst. In the right mandible, an impacted tooth can be seen to be surrounded by a unilocular radiolucency
Dentigerous cysts are quite common. In larger series [5], they comprise almost 17 % of all cases, only surpassed by radicular cysts. In most instances, they are associated with the maxillary canine or the mandibular third molar tooth.
Dentigerous cysts probably develop by accumulation of fluid between the reduced enamel epithelium and the crown surface or between the layers of the enamel epithelium itself [8]. So, in contrast with the inflammatory cysts, no epithelial proliferation is needed to form this cyst.
When removed in toto, one sees a bag from which the root part of the involved tooth protrudes (Fig. 10.9). Opening of the bag discloses the crown of the tooth, the cyst bag forming a collar at the neck of the tooth. Usually, however, the tooth is separated from the soft tissue during the surgical removal, and then, no specific macroscopic features can be recognised. 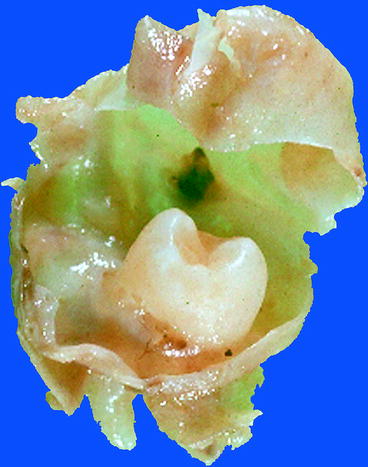 Fig. 10.9
Gross appearance of dentigerous cyst: tooth crown surrounded by thin-walled cyst that is attached to the neck of the involved tooth
Histologically, the cyst wall has a thin epithelial lining that may be only two to three cells thick and which resembles the reduced enamel epithelium (Fig. 10.10a). Sometimes, the original columnar shape of the cells, the inner enamel epithelium, can still be recognised (Fig. 10.10b). In case of inflammation, the epithelium becomes thicker and will show features similar to the lining of a radicular cyst (Fig. 10.10c). Also, mucous-producing cells as well as ciliated cells may be observed (Fig. 10.10d). The connective tissue component of the cyst wall may be fibrous or fibromyxomatous. The cyst wall may also contain varying amounts of epithelial nests representing remnants of the dental lamina. If the relationship between involved tooth and cyst bag is uncompromised, the cyst wall can be seen to be attached to the tooth surface at the level of the cemento-enamel junction (Fig. 10.11).

Fig. 10.10
Various appearances of epithelial lining in dentigerous cysts. (a) Most simple pattern consisting of two-layered cuboidal epithelium. (b
Only gold members can continue reading. Log In or Register to continue