Fig. 16.2
(a) A posteriorly directed lateral osteotomy for a sagittal split procedure injured the IAN causing a large neuroma that created a bone defect in the buccal cortical plate (arrows outline bone defect). (b) The neuroma (outlined by arrows) is observed through an extraoral approach 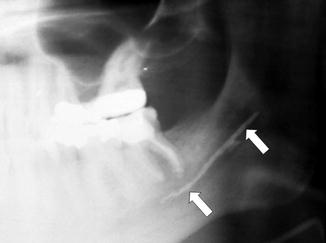 Fig. 16.3
A root canal procedure was performed on a mandibular molar with Sargenti paste injected into the root canals with extravasation (arrows) into the IAN canal. This caustic material causes severe nerve damage that adversely affects the nerve beyond the extent of the material 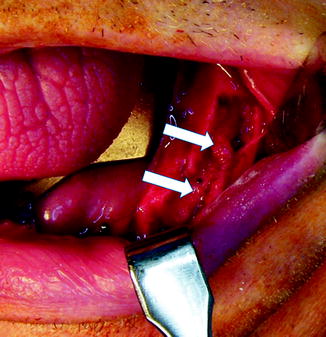 Fig. 16.4
This nerve injury resulted from placement of a dental implant that crushed the IAN. The injured IAN is between the arrows. Note the atrophy of the distal nerve segment

Fig. 16.5
(a) This illustration shows a crush injury to a right infraorbital nerve from a previous zygomatico-orbital fracture. (b) The nerve has been repaired with nerve grafts obtained from the greater auricular nerve as a cable graft

When surgical repair is required for a transected nerve or a nerve injury requiring excision, the best results, when conditions permit, are achieved with a direct nerve repair, without grafting. There are basically three types of nerve repair.
Perineural repair involves repairing the individual fascicles and placing sutures through the perineurium. Complications of this technique include trauma to the nerve in dissecting out each fascicle and fibrosis that develops because of the dissections and numerous sutures placed. The IAN and LN may have 9–21 fascicles depending on the location of the injury, so this perineurial repair method is impractical.
Group funicular repair involves repairing grouped fascicles with sutures placed through the intraneural epineurium, aligning groups of ­fascicles. Since the TN branches have non-grouped fascicles, this technique is not applicable.
Epineurial repair involves aligning the nerve ends and placing sutures through the epineurium only. Since the TN branches are polyfascicular (multiple, different-sized fascicles) and non-grouped, the epineurial technique is the most logical choice of repair method for the TN (Fig. 16.6a, b).

Fig. 16.6
(a) Since the trigeminal nerve is polyfascicular and the fascicles are non-grouped, (b) the epineurial repair is the preferred technique for neurorrhaphy

Fig. 16.7
(a) Diagram showing injury to the infraorbital nerve and loss of the proximal branch of the IAN from severe facial trauma, but the mental nerve was still present. (b) The infraorbital nerve was divided with short sural nerve grafts used to reanastomose the distal branches of the infraorbital nerve and a long graft from the other part of the proximal infraorbital nerve and (c) to anastomose to the mental nerve. In this case of nerve sharing or nerve transfer, the patient did regain some sensibility to the distribution of these nerve branches
The two most common autogenous donor nerves for TN repair are the sural and the greater auricular nerves. Selection of a donor nerve is predicated in part on ease of harvesting and on minimizing postsurgical symptoms associated with the donor nerve and its functional distribution. Both the sural and greater auricular nerves are relatively easy to harvest but yield localized areas of sensory deficit after surgery. Other potential donor nerves include the saphenous dorsal cutaneous branch of the ulnar nerve, the medial antebrachial cutaneous, lateral antebrachial cutaneous, superficial branch of the radial, ­intercostal, and other nerve branches of the cervical plexus [24, 47]. Several factors that are important to consider when selecting a donor nerve are as follows.

16.2.1 Diameters of Donor and Host Nerves

Fig. 16.8
The cable grafting technique may be indicated to improve the match of graft to host nerve in cross-sectional diameter, number of fascicles, and fascicular pattern

It may be difficult to obtain a graft longer than 2–4 cm from the greater auricular nerve. Since the greater auricular nerve (Fig. 16.9a) is generally half the diameter of the IAN and LN, a two-strand cable graft usually works best for diameter match (Fig. 16.8). Therefore, it may be difficult to graft a defect larger than 1–1.5 cm if the graft is harvested unilaterally. The sural nerve is larger in diameter, and a 20- to 30-cm length can be harvested without much difficulty (Fig. 16.9b). Since a longer graft will usually be necessary for nerve sharing techniques, the sural nerve would be the autogenous donor choice (Fig. 16.7a, b).

The number and size of fascicles should correlate between the donor and host nerves. The IAN usually has 18–21 fascicles in the third molar area (Fig. 16.10a), decreasing to about 12 fascicles just proximal to the mental foramen area (Fig. 16.10b) [43]. The LN in the third molar area usually has 15–18 fascicles [1], decreasing to 9 fascicles as it enters the tongue [48]. The sural nerve usually has 11–12 fascicles [8], which is 54 % of the number of fascicles in the IAN and 69 % of the number in the LN. The greater auricular nerve usually has 8–9 fascicles [47], which is significantly less than the number in the IAN (44 %) and LN (52 %). However, if a cable graft with two parallel nerve graft strands is used (Fig. 16.8), the combined number of fascicles correlates more closely with those of the IAN (87 %) and LN (104 %). Sometimes, the greater auricular nerve is even smaller, and the transverse cervical nerve may be considered. If the nerve graft is significantly smaller in diameter than the proximal host nerve stump, useful fascicles are lost, and a neuroma may form from collateral axonal microsprouting. If the graft is too large at the distal host nerve stump, then some of the regenerating nerve fascicles in the graft will be lost. If the distal portion of the graft is smaller than the distal portion of the host nerve, then a number of the fascicles in the distal portion of the host nerve will not regenerate.

Fig. 16.10
(a) This cross-sectional histological view of the IAN at the third molar area shows the polyfascicular pattern. (b) Just proximal to the mental foramen, the number of fascicles in the IAN decreases significantly

Harvesting the sural nerve results in numbness of the heel and lateral aspect of the foot (Fig. 16.11). Harvesting the greater auricular nerve results in numbness to the ear, lateral neck, and skin overlying the posterior aspect of the mandible (Fig. 16.12). An additional risk at the donor area in addition to the cervical scar is development of a painful neuroma that may require additional treatment. Patients may prefer that their numbness and/or potential complications be in the foot rather than in the head and neck area, therefore favoring the sural nerve as the preferred donor nerve, and, in fact, improved IAN or LN recovery following nerve repair correlates well with less patient-perceived morbidity from the nerve harvest site [33]. 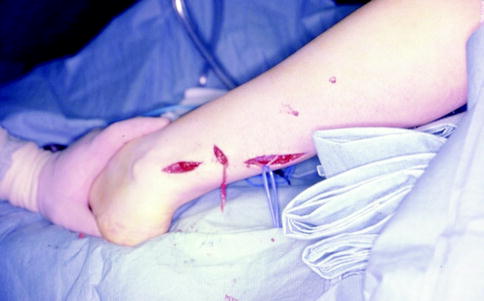 Fig. 16.11
The sural nerve may be harvested through multiple small incisions in the lower leg 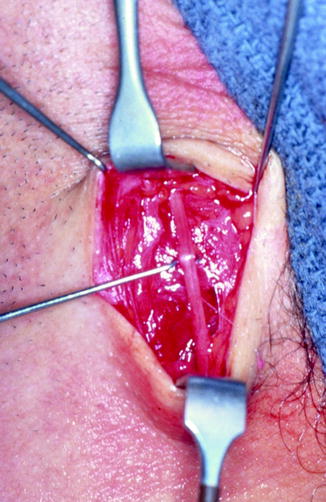 Fig. 16.12
The greater auricular nerve is harvested from the neck through a horizontal incision

The success and ultimate outcome of a nerve repair or grafting procedure are based on a number of factors, and the more favorable the factors, the better and more predictable the outcome.

In general, peripheral nerve injuries requiring surgical intervention will have better results the earlier the nerve is repaired after injury. Therefore, repairs with or without grafting performed immediately after the injury have better results, with progressively worsening results if done 3, 6, 9, or 12 months or longer after the injury. Wietholter and colleagues reported best results for IAN and LN repair if reconstruction was done within 3 weeks of the injury [53]. Early repair circumvents major problems encountered with elapsed time such as Wallerian degeneration, atrophy, and fibrosis in the distal portion of the nerve (Fig. 16.1). Atrophy creates a significant size match discrepancy between the nerve graft and either or both nerve stumps. The time factor reflects the rate and extent of degeneration and atrophy of the distal fascicles prior to nerve repair. However, if the injury is primarily a traumatic neuroma without atrophy or degenerative neurologic changes in the distal portion of the nerve, the time factor may not be as important; that is, whether the repair is done at 3 weeks or 2 years may not make a difference in functional outcome.

The more localized and confined the injury to the nerve, the less trauma to the nerve, and the shorter the required nerve graft (or possibility of repair without grafting), then the better the outcome. Stretch-type injuries or injuries caused by the injection of alcohol, steroid, or other caustic chemical into or adjacent to a nerve (Fig. 16.3) can cause significant irreversible damage to the nerve, which can extend proximally into the ganglion cell bodies, beyond a surgically accessible area, thus rendering peripheral nerve repair ineffective. In addition, significant ganglion cell death from nerve trauma may occur early (within 90 days) following axotomy injuries, and this further supports the hypothesis that early repairs have improved outcomes.

Quality of repair is particularly sensitive to the surgeon’s skill and experience. Obviously, the highest quality repairs yield the best results. A high-quality repair includes atraumatic ­management of the proximal and distal ends of the host and graft nerves and meticulous ­neurorrhaphy techniques. The TN branches are polyfascicular without grouping and have a large number of fascicles, so epineurial repair is the most logical and appropriate technique (Fig. 16.6). Depending on the situation, 8-0 to 10-0 monofilament nylon suture can be used for the repairs. Minimizing the number of sutures (3–6 is optimal) is helpful as long as the approximation of the nerve graft to the nerve stumps is accurate. It is important to attempt to suture only the epineurium and not pass the needle and suture through the fascicles, since this can create more fascicular damage and scarring, yielding a poorer result.

The nerve should be repaired or grafted with no tension on the nerve segments and areas of ­anastomosis (Fig. 16.13a, b). Excessive tension can cause breakdown at the area of anastomosis with scar tissue formation, resulting in a poor outcome. The host nerve should be prepared prior to harvesting the graft so that graft length can be determined as accurately as possible. It must be remembered that the sectioned host nerve segments will retract, yielding a larger defect. Additionally, a harvested nerve graft shrinks in length by approximately 20 %, and additional length may be lost in final preparation of host and nerve graft ends. Therefore, the nerve graft harvested should be at least 25 % longer than the initially measured host nerve defect to compensate for these predictable changes.

Fig. 16.13
(a) Lingual nerve with a large neuroma (between arrows) as a result of an impacted third molar removal. (b) The nerve has been repaired with a sural nerve graft without any tension on the nerve segments. The distal and proximal anastomoses are delineated by arrows

A good outcome requires complete removal of the area of injury and assurance of healthy, viable nerve tissues at the proximal and distal stumps. Frozen sections for histological assessment of the proximal and distal stumps may be helpful to determine when good, viable nerve tissue has been reached [51]. In the distal end, there may be degenerative changes (Wallerian degeneration) involving the fascicles. However, it is important to be sure that no significant fibrosis or other obstructions remain in the distal portion of the host nerve (Fig. 16.14a, b). The proximal and distal nerve stumps should be prepared with 1.0-mm resections until healthy fascicles are encountered. Of course, with continued incremental resection, the need for nerve grafting, or defect management, increases significantly, but this is a necessary step to ensure that scar tissue does not remain at the host nerve stumps since this would result in a poor outcome.

16.3.9 Age of Patient and Other Health Factors