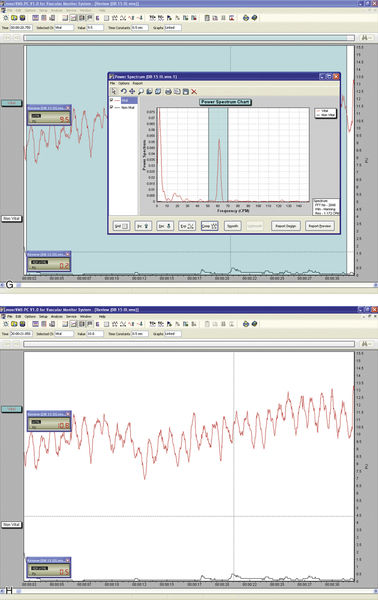 • Figure 13-1 A, Laser Doppler flowmeter unit. B, Mold made of quick-set putty with two embedded laser Doppler probes. C, Slow-speed round burs can be used to make holes in the putty for the placement of probes. D and E, Laser Doppler probes for assessment of blood flow in anterior teeth (D) and posterior teeth (E). F, Quick-set putty with dental probes in position in the mouth. G, Blood flow analysis readout. H, Fourier analysis of blood flow data. (A, D, E, G, H, Courtesy Moor Instruments, Ltd.)
Moritz et al.29 used a CO2 laser in patients requiring direct pulp-capping treatment. Laser irradiation at an energy level of 1 W with 0.1-second exposure time and a 1-second pulse interval was repeated until the exposed pulp cavities were completely sealed. The pulps were then dressed with Ca(OH)2. In the control group, the pulps were capped with Ca(OH)2 only. Symptom status and tooth vitality were assessed after 1 week and monthly for 1 year; 89% of patients in the experimental group had no symptoms and exhibited normal responses to vitality tests in the treated pulps versus only 68% in the control group.
With deep and hypersensitive cavities, indirect pulp capping should be considered. A reduction in the permeability of the dentin, achieved by sealing the dentinal tubules, is paramount. Nd:YAG and 9.6-μm CO2 lasers can be used for this purpose. The 9.6-μm CO2 laser wavelength is well absorbed by the hydroxyapatite of enamel and dentin, causing tissue ablation, melting, and resolidification.30 The use of the 9.6-μm CO2 laser did not cause any noticeable damage to the pulpal tissue in dogs.31
White et al.32 found that use of a pulsed Nd:YAG laser with an energy level less than 1 W, with a 10-Hz repetition rate and overall 10-second exposure time, did not significantly elevate the intrapulpal temperature. According to their results, these settings may be considered safe parameters because the remaining dentinal thickness in cavity preparations cannot be measured in vivo. It is therefore recommended that clinicians choose laser parameters lower than these safety limits.

Obturation of the Root Canal System

Obturation of the prepared root canal space is done (1) to eliminate all avenues of leakage from the oral cavity or from the periradicular tissues into the root canal system and (2) to seal within the system any irritants that cannot be fully removed during the cleaning and shaping procedures.78 The rationale of introducing laser technology to assist in obturating the root canal system is based on the following two assumptions about the laser’s ability:
• Using the laser irradiation as a heat source for softening gutta-percha, which is employed as the obturating material
• Using the laser as a means to condition the dentinal walls before placement of an obturation bonding material
The concept of thermoplasticized compaction is not new and covers any technique that is based entirely on the heat softening of gutta-percha combined primarily with vertical compaction. The technique has many different names, including warm sectional technique, vertical compaction with warm gutta-percha, and the Schilder technique. Schilder79 first described the technique to fill root canals in three dimensions more than 40 years ago. At present, some dental practitioners still use this technique, whereas others use newer, warm gutta-percha techniques such as thermomechanical compaction, thermoplasticized gutta-percha, and injection of softened gutta-percha, which have been introduced to simplify the root canal filling procedure.
The first laser-assisted root canal filling procedure used the wavelength of the 488-nm argon laser. This wavelength, which is transmitted through dentin, was used to polymerize a resin placed in the main root canal. Testing the ability of this biomaterial to penetrate into accessory root canals showed that the resin in the lateral canals was readily polymerized at low energy levels (30 mW). Further use of this wavelength became irrelevant because of its poor properties for most other dental procedures.80
Anic and Matsumoto81 were the first to compare different root canal filling techniques used to fill single-rooted teeth. Lateral condensation, vertical condensation, low-temperature gutta-percha (Ultrafil), and laser-cured resin with different wavelengths (argon, CO2, Nd:YAG) were used. The apical sealing ability achieved by the various filling techniques was compared by measuring apical dye penetration after placement of the samples in a 1% solution of methylene blue. Gutta-percha softened with an argon laser created an apical seal similar to that obtained with the lateral condensation and Ultrafil techniques.
Maden et al.82 used the dye penetration method to measure apical leakage by comparing lateral condensation, System B technique (using thermoplasticized compaction; SybronEndo, Orange, California), and Nd:YAG-softened gutta-percha. No statistically significant differences among the different treatment groups were reported. Anic and Matsumoto83 measured a temperature elevation on the outer root surface of 14.4° C with use of the Nd:YAG and of 12.9° C with the argon laser. Such a temperature increase may be detrimental to the tissues of the periodontal ligament and attachment apparatus of the teeth, so the implications of using such treatment methodologies remain in question.
To examine whether laser irradiation does improve the adhesion of endodontic materials to the dentinal walls of the root canal and reduce apical leakage, Park et al.84 used different sealers and two root canal filling techniques. These investigators concluded that Nd:YAG laser irradiation at the end of the root canal preparation (at 5 W, 20 Hz) reduced the apical leakage regardless of the sealer or the technique used. Kimura et al.85
Only gold members can continue reading. Log In or Register to continue