Future Directions for the Treatment of Dentin Hypersensitivity 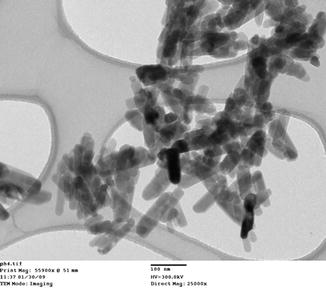 Fig. 8.2
Fluorhydroxyapatite crystals (FA). Individual crystals 50–150 nm in length and 20 nm in cross section
These crystals were incorporated into a poly(DMA-co-MEA) polymer at a fill ratio of 40 % FA (w/v) and the paste applied to wet, EDTA-etched dentin surfaces. The surfaces were then rinsed for 1 min before being viewed in a scanning electron microscope (SEM). The SEM images showed a greater than 80 % obstruction or partial obstruction of the dentinal tubules (Fig. 8.3). This suggests that the paste may produce immediate relief of the symptoms of dentin hypersensitivity after one application. For longer-term relief the paste was tested for ion release under neutral and acid conditions. Calcium, phosphate, and fluoride were released under both of these conditions suggesting that the paste would release the ions under a wide range of intraoral pH. This might then allow for a mineralized layer to form on the surface of the dentin offering permanent, long-term relief of the pain associated with dentin hypersensitivity. A standard XTT assay for toxicity of the poly(DMA-co-MEA) alone and the FA/poly (DMA-co-MEA) paste showed that they were non-toxic. Further work on this novel, experimental desensitizing paste needs to be carried out, especially conductivity tests. 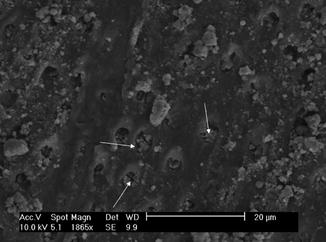 Fig. 8.3
Poly(DMA-co-MEA) + FA crystals obstructing patent tubules. Arrows indicate obstruction of dentinal tubule orifice by FA crystals
Sealing of the dentin surfaces using a resin has been tried as a cure for dentin hypersensitivity. Unfortunately the drying and etching of the dentin is very uncomfortable for the patient, and long-lasting retention of the resins has been a problem (Duran and Sengun 2004). However, more recently with the advent of the self-etch resins which are more tolerant of the moist conditions in the oral cavity make their use realistic as a carrier for dentinal tubule occluding agents (Ferracane 2011). Thus, we have combined the crystal technology used above with a self-etch resin to produce a dentin desensitizing agent. This paint-on “enamel” has certain advantages over and above the fact that it adheres strongly to dentin surfaces. Both the resin and the FA crystal filler will block the patent dentinal tubules (Fig. 8.4); it can be white or tooth colored to give an esthetic result (Fig. 8.5); and it can be professionally or self-applied depending on the curing mechanism. Perhaps most importantly the self-etch resins are already in clinical use and the FA crystals are similar to enamel crystals, so approval by the Federal Drug Administration should not be a problem. The blockage of the patent tubules by the resin and the FA crystals should offer immediate pain relief with the longer-term relief coming from the release of the ions and the formation of a mineralized surface layer on the dentin which may extend into the tubules. In vitro studies have shown a reduction of 80–85 % of the conductance through dentin sections after drying the dentin surface with a cotton bud and treating the exposed surface once and light curing the resin/FA mixture (Table 8.1). In vivo studies are now planned to test the substantively of the paint-on “enamel” to dentin surfaces, and then its ability to give short-term and long-term relief to people suffering from dentin hypersensitivity will be tested.

Tags: Clinician's Guide to the Diagnosis and Management of Tooth Sensitivity
Nov 10, 2015 | Posted by mrzezo in General Dentistry | Comments Off on Future Directions for the Treatment of Dentin Hypersensitivity
Premium Wordpress Themes by UFO Themes
WordPress theme by UFO themes