The forehead occupies the upper third of the face entirely, and its bony shape and muscle activity are intimately associated with the aesthetics and functions of the orbital and nasal units; its width is about twice its height.
Two skeletal subunits can be considered: the supraorbital bar and the upper forehead [5]. The supraorbital bar, corresponding to the supraorbital rim and glabellar area, greatly influences the aesthetics of the brow, the upper lid, and the nasal radix, due to its direct structural support. Its shape varies widely with the development of the frontal sinus, with more angularity and anterior prominence in male subjects than in female ones.
The upper forehead, located above the supraorbital bar, consists of a slight vertical and transversal convexity. The palpable and often visible rim of the temporal fossa, also called the temporal ridge, is the lateral boundary of the forehead. The hairline, which defines the forehead upper boundary, is quite different between the sexes and, especially in relationship with men’s anterior balding, can change with age.
When analyzing the bony forehead, three important aesthetic characteristics should be considered: the general shape, the slope, and the morphology of the supraorbital bar. The outline, in profile and oblique views, varies from round to flat with, sometimes, an inferior concavity defining the supraorbital ridge. The basal view is useful in defining the symmetry and the grade of transversal convexity.
The soft tissue analysis of the forehead should recognize the glabellar frown lines and the transverse forehead wrinkles or furrows along with the evaluation of the regional muscle dynamics.
Even if the forehead can be reshaped surgically with specific procedures, in the vast majority of cases, it should be considered as a stable and highly visible skeletal structure that can be utilized as a reference in the process of analysis of the shape, volume, and spatial orientation of other structures such as the nose, the midface, the anterior teeth, and the chin.
The temporal region, which is bounded inferiorly by the zygomatic arch, anteriorly by the posterior rim of the frontal process of the malar bone and the zygomatic process of the frontal bone, and superiorly by the rim of the temporal fossa, can vary from slightly concave to slightly convex depending on the volume of temporal muscle and subcutaneous fat. The shape and location of the temporal hairline have an important role as a boundary in the aesthetics of the upper third of the face.

From the aesthetic and functional point of view, there is no sense in evaluating the eyebrow separately from the upper lid or any other component of the orbital region. Figure 6.1 shows the surface anatomy of the orbital region along with the related basic terminology. 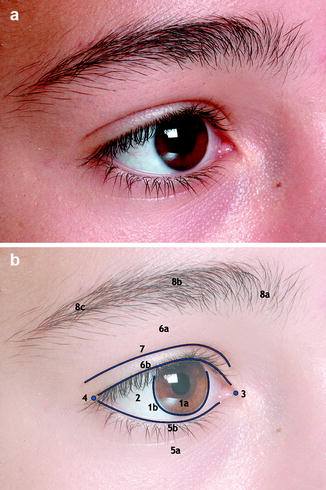 Fig. 6.1
Close-up oblique view of orbital region in a young subject (a). Basic elements of normal surface anatomy of the orbital region (b): 1a iris, 1b limbus (the circular line separating the iris from the white sclera), 2 white sclera, 3 medial canthus, 4 lateral canthus, 5a lower lid, 5b lower lid free margin, 6a upper lid, 6b upper lid free margin, 7 upper lid crease, 8a medial third of the eyebrow (head), 8b central third of the eyebrow (body), and 8c lateral third of the eyebrow (tail)
The assessment of the skeletal support sustained by the orbital ridges and the globe to soft tissue requires the visualization in profile view of three different vertical reference lines, which, in the frontal view, pass through the center of the iris (Fig. 6.2a): 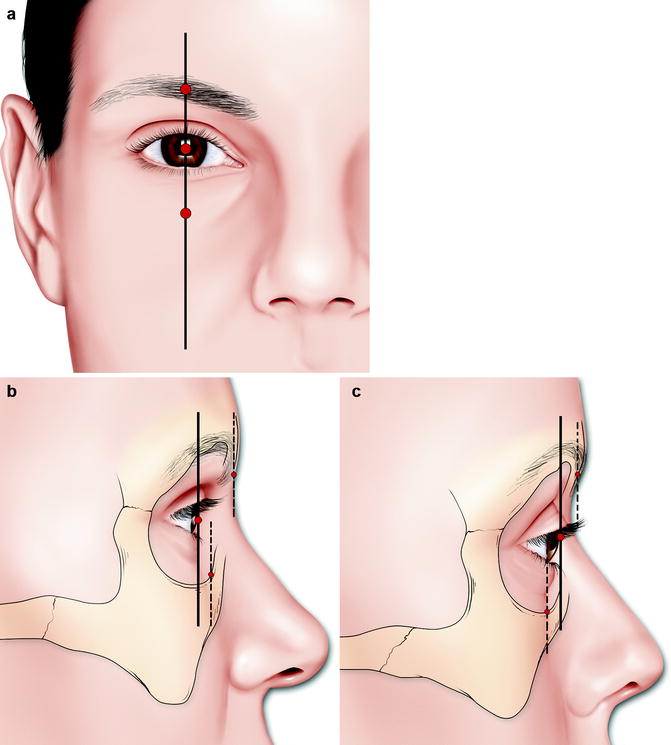 Many authors have studied the attractive female eye and brow, producing the criteria that were assembled and reformulated by Gunter and Antrobus in their article of 1997 [3]. Some of these are:
The main differences in the attractive male eye are in the intercanthal axis, which is less inclined upward from medial to lateral, in the supraorbital ridge anterior projection, which is augmented, and in the brow, which is wider, less arched, and more horizontally oriented. Figure 6.4 shows a comparison between an attractive female and an attractive male eye.

Fig. 6.4
Comparison between the female attractive (a) and the male attractive eye (b). In male subjects, the intercanthal axis is less inclined upward from medial to lateral, the supraorbital ridge anterior projection is augmented, and the brow is wider, less arched, and more horizontally oriented

The vertical position of the upper lid crease must be assessed with precision during clinical examination. It may be related to different conditions such as ethnicity, aging, and levator muscle dehiscence from the tarsal plate [8].
To evaluate the vertical position of the upper lid crease precisely, we can utilize the margin crease distance. It is the distance from the central upper eyelid margin to the tarsal crease measured with the eyelid fold elevated by the examiner and as the patient looks down (Fig. 6.5a). The normal range in occidentals reported by Putterman is 9–11 mm [7], whereas that reported by Wolfort, Baker, and Kanter is 8–10 mm [9]. 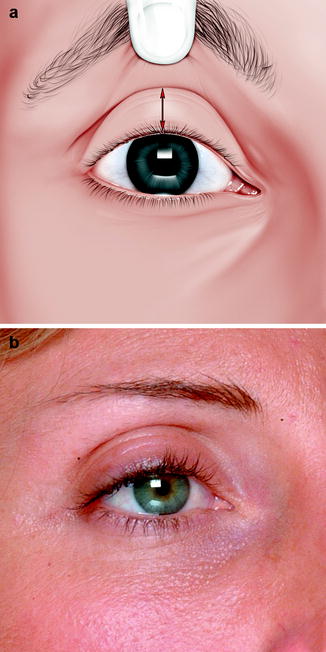