Craniofacial Distraction of the Maxilla

Distraction osteogenesis of the midface is performed to correct bony and soft tissue deficits of the maxilla, zygoma, or fronto-orbital regions. To address specific anomalous midface morphologic relationships, distraction can be performed at one of four levels: Le Fort I, Le Fort II, Le Fort III, and the fronto-orbital and midface level, also known as the monobloc advancement. Midface advancement with distraction osteogenesis confers several advantages over conventional midface advancement, including avoidance of bone grafts, plates and screws; decreased surgical time; decreased blood loss; decreased hospitalization time; and improved aesthetics. The most important advantage conferred by distraction, however, is its ability to advance tissues over a greater distance in one procedure, thereby potentially obviating the need for a secondary advancement. Following traditional steps are required for distraction osteogenesis of the midface: (1) osteotomy, (2) latency period (3 to 7 days), (3) distraction (~1 mm/day), (4) consolidation (mineralization) period (3 to 6 weeks), and (5) removal of the distractor.

Distraction of the midface is most commonly performed for maxillary hypoplasia, typically resulting from impaired maxillary growth in patients who have undergone cleft lip and palate repair. Scar-tissue formation resulting from these repairs, in addition to primary maxillary growth deficits, can produce severe maxillary hypoplasia that requires very large bony advancements for full correction. Such patients can benefit from Le Fort I-type distraction osteogenesis. Midface dysplasia secondary to midface underdevelopment is also seen in a spectrum of craniofacial syndromes, collectively termed craniofacial dysostoses, including Apert’s, Treacher Collins’, Crouzon’s, and Pfeiffer’s syndromes, among others. Those patients with severe midface hypoplasia who have not yet completed facial growth may benefit from distraction osteogenesis at the Le Fort II or III level. The monobloc, or fronto-orbital and midface distraction, is typically performed for patients with syndromal midface growth deformity who also require advancement of the forehead and orbits at one stage. In this patient population, monobloc distraction significantly reduces complications when compared with traditional monobloc advancement because extradural dead space is avoided. Finally, the smallest group of patients requiring distraction osteogenesis are those with acquired anomalies. Among these are patients with posttraumatic midface retrusion, atrophy of edentulous zones, and defects resulting from oncologic or dysplastic processes.

When operative intervention is indicated, the craniofacial surgeon completes the preoperative workup, obtaining any additional studies necessary for planning and completing the procedure. The preoperative evaluation can often be extensive and requires close collaboration between multiple medical specialists, most notably the orthodontist and craniofacial surgeon, to optimize the initial surgical outcome and the patient’s long-term result. Preoperative testing and planning modalities are used in concert with physical examination findings to aid the surgeon in planning the operative approach in detail, including the total desired advancement as well as distraction vectors. Typically, preoperative 3-dimensional dental occlusion models and imaging studies are obtained, including frontal and lateral cephalograms, panoramic (Panorex) radiographs, and maxillofacial computed tomography (CT) with 3-dimensional reconstructions. It is important to consider any asymmetry including that affecting the mandibular and occlusal planes. Occlusal relations (anterior–posterior, transverse, open bite) should also be well delineated preoperatively. All these parameters must be examined to establish the correct distraction vector and distractor device placement. When planning a midface advancement procedure, one must also consider parameters such as the severity of exorbitism, the nature of anterior–posterior deficiency within the midface bony structures, and the position of the midface relative to the cranial base and mandible.1 The surgeon typically calculates the expected total distraction distance in relation to anatomic deficits, as based upon the physical examination, CT imaging, and cephalometric analysis. Concurrently, he or she estimates the expected latency period (typically, 3–7 days), the speed and frequency with which distraction is to be conducted (typically, 1 mm/day) and the consolidation time, while taking into account the patient’s age, prior surgery and scarring, and overall bone quality. Additionally, one must consider the patient’s age with respect to the potential for growth and hence, whether overcorrection is necessary, to allow for anticipated secondary growth deficiency of the distracted segment.

Isolated maxillary advancement, or Le Fort I maxillary distraction, is performed primarily on patients with midfacial retrusion secondary to cleft deformity (Figure 8.1, A–C).2–5 In approximately 25% to 50% of patients with complete unilateral cleft lip and palate,6,7 the class III malocclusion is sufficiently severe to warrant surgical intervention.8 A subset of these patients requires advancements greater than can be obtained by traditional Le Fort I osteotomy and advancement. Because advancements up to 40 mm may be achieved with maxillary distraction, Le Fort I distraction (LF I DO) is considered the goldstandard treatment for these patients. LF I DO is typically performed on patients who are in the mixed dentition phase (ages 6–12) (Figure 8.1, D–H). Oral intubation may be used during these procedures, as there is no need for mandibulomaxillary fixation. After maxillary exposure by upper buccal sulcus incision, the osteotomy is made at the conventional Le Fort I lines on the maxilla: the lateral wall, medial sinus wall, nasal septum, and pterygomaxillary junction. Internal reference marks may be used to avoid injury to the root apices. The osteotomy line is horizontal and made parallel to the occlusal plane. A reciprocating saw is typically used to section the lateral wall of the maxilla in a posterior-to-anterior direction, although the sequence of cuts can vary based on the surgeon’s preference. Importantly, plate-and-screw fixation is not necessary during this procedure. Consequently, the Le Fort I osteotomy can be made at a very high level, just inferior to the infraorbital foramen, thereby avoiding damage to the permanent tooth follicles. Alternatively, incomplete osteotomies can be made in order to protect the permanent teeth in these children, which may still be located high in the maxilla. 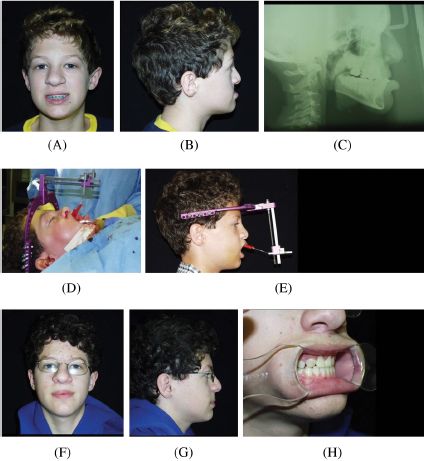 Several types of maxillary distractors are available. The rigid external distractor or similar external devices are particularly stable and permit modification of the distraction vector during activation. A variety of internal distractors are also available. Most centers prefer a halo-type external distraction system since they consider the Le Fort I internal device too cumbersome in these children. Initially, the exit pins were often placed below the upper lip, where they were attached to wires protected by a red rubber catheter over which the lip was draped (Figure 8.1

Tags: Handbook of Craniomaxillofacial Surgery
Apr 14, 2015 | Posted by mrzezo in Oral and Maxillofacial Surgery | Comments Off on Craniofacial Distraction of the Maxilla
Premium Wordpress Themes by UFO Themes
WordPress theme by UFO themes