This chapter discusses carbohydrate metabolism. Carbohydrates occupy an important place in metabolism because of their roles in energy production and various biosynthetic pathways. Starch is the main source of energy in most populations; before it can be absorbed, it must be broken down. The hydrolysis of starch is catalyzed by enzymes known as amylases, which occur in the saliva and the pancreatic juice. The amylases of animal origin are called α-amylases to distinguish them from the β-amylases of plants, which differ in their point of attack on the starch molecule. The β-amylases are exoamylases that nip off maltose units from the ends of the amylose and amylopectin molecules, whereas the α-amylases are endoamylases and catalyze the breakdown of bonds occurring in the interior of the molecules. The first products of the action of the α-amylases are the dextrins, which are progressively degraded into smaller and smaller units. The final product consists mainly of maltose together with some small branched-chain oligosaccharides. A separate enzyme produced in the intestine is required to hydrolyze the α-1:6 bonds of amylopectin. The dietary carbohydrates also include sucrose and lactose. Specific disaccharides that convert these sugars into their constituent monosaccharides are present in the brush border of the intestinal epithelial cells.

Carbohydrates occupy an important place in metabolism because of their roles in energy production and various biosynthetic pathways. Starch is the main source of energy in most populations (page 122) and before it can be absorbed it must be broken down. The hydrolysis of starch is catalysed by enzymes known as amylases which occur in the saliva and the pancreatic juice. The amylases of animal origin are called α-amylases in order to distinguish them from the β-amylases of plants, which differ in their point of attack on the starch molecule. The β-amylases are exoamylases which nip off maltose units from the ends of the amylose and amylopectin molecules, whereas the α-amylases are endoamylases and catalyse the breakdown of bonds occurring in the interior of the molecules. The first products of the action of the α-amylases are the dextrins (page 98) which are progressively degraded into smaller and smaller units. The final product consists mainly of maltose together with some small branched-chain oligosaccharides. A separate enzyme produced in the intestine is required to hydrolyse the α-1:6 bonds of amylopectin.

The amylase present in saliva is unlikely to have a significant digestive function in Man because of the short time during which the food is in the mouth and the fact that the gastric pH (1−2) is well below the optimum pH (6·8) of salivary amylase. It is likely, therefore, that the breakdown of starch is mainly effected in the small intestine by pancreatic amylase. The α-amylases require Cl− as a cofactor whereas most ionic cofactors are cations.

The dietary carbohydrates also include sucrose and lactose. Specific disaccharidases which convert these sugars into their constituent monosaccharides are present in the brush border of the intestinal epithelial cells. Only monosaccharides can be absorbed and an active transport system ensures that glucose, galactose and other sugars having the structural features shown below

are absorbed even against a concentration gradient. The active transport of such sugars into the mucosal cells is linked with the transport of Na+ in the same direction. Other monosaccharides including fructose and the pentoses are absorbed by passive means. The monosaccharides pass into the portal system and are transported to the liver, where they are converted into compounds that are normal intermediates of glucose metabolism.

Three distinct but integrated pathways are responsible for the breakdown of glucose and its conversion to carbon dioxide, water and utilizable energy. They are: (1) the glycolytic or Embden-Meyerhof pathway; (2) the citrate cycle and electron-transport chain which provide the final common pathway for the products of carbohydrate, lipid and amino acid metabolism; (3) the pentose phosphate pathway.

The glycolytic or Embden-Meyerhof pathway

The process of glycolysis, whereby glucose is converted to pyruvate and a small amount of ATP is produced, occurs in the cytoplasm and is essentially the same in all living cells regardless of whether the organism is an aerobe or an anaerobe. Variations occur, however, in the subsequent metabolism of the pyruvate.

The intermediates in glycolysis are all phosphorylated derivatives of hexose (C6) or triose (C3) sugars and the first three steps in the pathway convert the glucose into a form that can be broken down into two triose phosphate units.

The glucose is phosphorylated by ATP to give glucose 6-phosphate. This reaction, which is irreversible, is catalysed by hexokinase and requires Mg2+. As its name suggests hexokinase is not very specific and is able to phosphorylate a variety of hexose sugars.

The next step is a reversible isomerization reaction in which the six-membered pyranose ring of glucose is converted into the five-membered furanose ring of fructose under the influence of glucose 6-phosphate isomerase.

The fructose 6-phosphate is then converted into fructose 1,6-bisphosphate by a second phosphorylation with ATP which is catalysed by phosphofructokinase. Phosphofructokinase is an allosteric enzyme and the reaction, which is irreversible, is an important control point, i.e. rate-limiting step (page 337), for the glycolytic pathway.

At this stage fructose 1,6-bisphosphate is cleaved to give two triose phosphate molecules, namely glyceraldehyde 3-phosphate and dihydroxyacetone phosphate in a reversible reaction which is catalysed by aldolase. 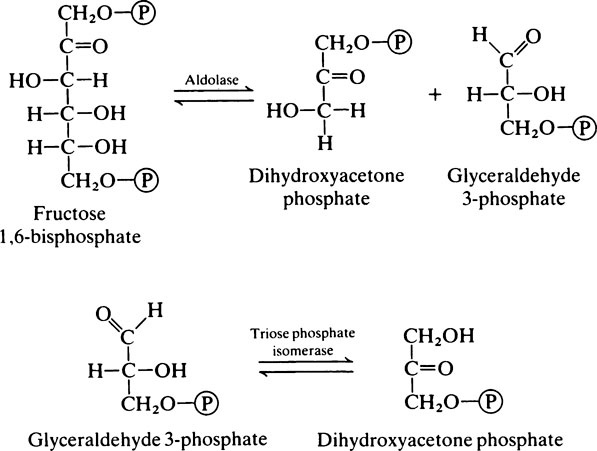 Up to this point two molecules of ATP have been used in the reaction sequence and no energy has been extracted from it. The next reaction, however, involves an oxidation in which the aldehyde group of the glyceraldehyde 3-phosphate is both dehydrogenated and phosphorylated and converted into the high-energy compound 1,3-diphosphoglycerate which is a mixed anhydride of a carboxylic acid and phosphoric acid. The energy required for this conversion comes from the oxidation of the aldehyde group and enables inorganic phosphate to act as the donor. The hydrogen atoms that are removed are transferred to the hydrogen-carrying

coenzyme NAD+. The reaction is blocked by iodoacetate which combines with an −SH group of the enzyme glyceraldehyde 3-phosphate dehydrogenase and interferes with the substrate binding.

This is the first reaction in which ATP is produced. It is an example of substrate level phosphorylation in which the energy required to convert ADP to ATP is obtained from an energy-rich substrate in a reaction catalysed by a specific kinase, in this case phosphoglycerate kinase.

The last phase of glycolysis consists of three steps in which the 3-phosphoglycerate produced in reaction 6 is converted to pyruvate and another molecule of ATP is formed.

By an intramolecular rearrangement, the phosphate group of 3-phosphoglycerate is transferred to the 2-position in a phosphate transfer reaction catalysed by phosphoglyceromutase.

The high-energy phosphoenolpyruvate is used in a second substrate level phosphorylation catalysed by pyruvate kinase in which ADP is converted to ATP and pyruvate is produced. The reaction is irreversible under normal physiological conditions.

Energy production and the importance of glycolysis

Pyruvate is an important compound. After entering the mitochondria it may be converted to acetyl-CoA (page 232) which is then oxidized to carbon dioxide and water by the joint activities of the citrate cycle and electron-transport chain with the production of much greater quantities of ATP than are produced by glycolysis alone. It also has a role in amino acid synthesis as it may be transaminated to form alanine (page 281). Pyruvate is also an important intermediate in gluconeogenesis the process whereby glucose is synthesized from non-carbohydrate sources (page 237). In bacteria a variety of end products may be formed from pyruvate depending both on the nature of the bacterium and the environmental conditions. When oxygen is in short supply, muscle tissue converts pyruvate to lactate while yeasts ferment it to ethanol.

The three-dimensional structures of seven glycolytic enzymes, three dehydrogenases, three kinases and a mutase have been worked out. All of them, in spite of the diversity of the reactions they catalyse, contain a region which has a similar structural pattern in which 150 amino acids take part. This suggests that all these enzymes are derived from a common primeval gene and that the glycolytic pathway must have developed at a very early stage in evolution. 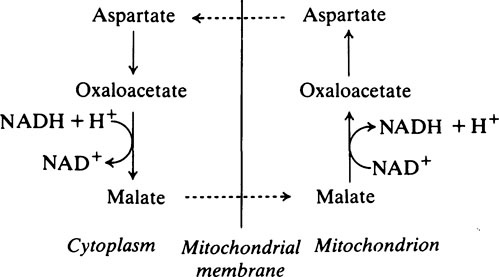 When glycolysis is occurring under aerobic conditions the hydrogen atoms released in the oxidative reaction take the pathway shown above and are oxidized to water via the reactions of the electron-transport chain. However, when, as in a muscle that is being strenuously exercised, there is a shortage of oxygen, the mitochondrial system, which is essentially aerobic, cannot operate effectively and an alternative method must be found to oxidize the NADH produced during glycolysis. Under these conditions, instead of the NADH being used to convert dihydroxyacetone phosphate into glycerophosphate, it is used to convert pyruvate into lactate by the following reaction which is catalysed by lactate dehydrogenase:

In this way NAD+ is regenerated and the muscle cells can continue to produce small amounts of ATP glycolytically. ATP may also be derived from phosphocreatine and from the myokinase reaction.

Quite large amounts of lactate may be produced in muscle as a result of anaerobic glycolysis and its fate is considered later (page 239). It is mainly derived from muscle glycogen since, although when resting the muscles obtain their energy by metabolizing glucose and fatty acids obtained directly from the blood, during exercise the stored muscle glycogen is called upon. This has the advantage that, at a time when ATP is in short supply, one molecule is ‘saved’ for every glucosyl residue of glycogen used instead of glucose itself. This is because the glucosyl residues are in a higher energy state than free glucose and are phosphorylated by a low-energy phosphoryl donor, i.e. inorganic phosphate (page 234) rather than ATP, which is needed for the phosphorylation of glucose.

The net reaction for the fermentation of glucose is

Other microorganisms have different ways of metabolizing pyruvate. End products include lactic acid, butyric acid and propionic acid as well as various alcohols. Some of the reactions are considered in more detail in connection with the metabolism of plaque.

Conversion of pyruvate to acetyl-CoA

Glycolysis is linked to the citrate cycle (page 240) by a series of reactions in which pyruvate is converted into the acetyl derivative of coenzyme A. Coenzyme A has a nucleotide-type