Fig. 5.1
Two-dimensional finite element stress analysis of endodontically treated teeth with different post systems. (a) Sound tooth; (b) Metallic cast post and core and (c) glass fiber post
Another factor to be considered in post selection is the amount of stress generated during post placement. Metal threaded posts produce high stress concentrations in root dentin at each thread, causing strains that may create cracks, as can be observed in the scanning electron micrograph in Fig. 5.2 (Santos Filho et al. 2013).

The restoration of endodontically treated teeth can be affected by several factors, such as the amount of ferrule, post diameter and design, and post material. These factors modify the stress distribution, thus fracture resistance of these teeth. Shorter cast post and cores exhibit poor biomechanical performance and high incidence of catastrophic failures (Santos-Filho et al. 2014b). Some studies have suggested that the correct post length should be at least the length of the crown or two-thirds the length of the remaining root. However, this concept was developed for cast metal post and cores that are retained by friction. Clinically, the length of the post may be limited by root curvature or an obstruction in the root canal. Glass fiber posts have the advantage of bonding to dentin and therefore are less restricted by the required length compared to cast post and cores (Santos-Filho et al. 2008).
Finite element analysis showed that the stress distribution of endodontically treated teeth restored with glass fiber posts were not significantly influenced by the post length (Fig. 5.3) (Santos-Filho et al. 2014b). However, whenever possible, a clinician should still prepare the post space for two-thirds of the root length to increase the bonding surface, allowing for a better retention between the glass fiber post and the root canal.

5.3 Biomechanical Performance of Fiber Posts on Anterior vs. Posterior Teeth

Anterior or posterior teeth have specific functions in the mouth, which determine their loading conditions and anatomy. Posts placed in anterior teeth (incisors and canines) were reported to be three times more likely to fail than those of posterior teeth (premolars and molars) (Naumann et al. 2005). This may be explained by the higher horizontal force components on anterior teeth compared with posterior teeth (Naumann et al. 2005). Glass fiber posts have performed well for all teeth, although the fracture resistance is lower for incisors and premolars when compared with canines and molars (Castro et al. 2012). More catastrophic failures were found when cast metal post and cores were used. Glass fiber posts were effective for restoring of endodontically treated molars regardless of the remaining tooth structure (Santana et al. 2011).

Endodontically treated teeth can be significantly weakened with canals that are flared by the progression of caries in combination with endodontic access and/or overpreparation (Silva et al. 2011). Restoration of such severely weakened teeth is a challenge because they are more prone to fracture and fatigue. Fiber posts with suitable shapes that fit flared canals are not readily available. Cast metal post and cores have been used, but the morphology of flared canals results in very wide, tapered, and non-retentive posts. Moreover, the use of metals with high elastic modulus can cause high stress concentrations as discussed above (Fig. 5.4). A standard geometry glass fiber post leaves excess space within the flared root canal to be filled with a bulk of luting cement. This results in a potentially weak area, which may compromise the long-term prognosis (Silva et al. 2011). 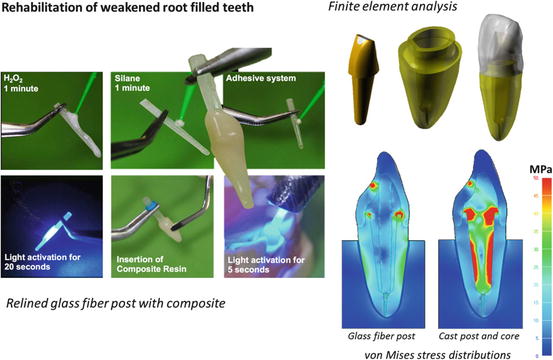 Fig. 5.4
Rehabilitation of weakened endodontically treated teeth with a glass fiber post relined with composite resin before cementation
A simple alternative method is to reline glass fiber posts with composite resin (Fig. 5.4). Post surface can be treated with 24 % hydrogen peroxide for 3 min followed by a silane and adhesive system to allow bonding (de Sousa Menezes et al. 2011). Clinicians can also use conventional hydrogen peroxide used for in-office dental whitening (35 %); however, the surface treatment time is reduced to 1 min (Menezes et al. 2014). After the post surface treatment, the root canal walls should be isolated with water-soluble gel. Composite resin is then added to create an anatomic post to match the morphology of the flared canal. A substantial portion of uncured composite material is placed around the glass fiber post and inserted inside the root canal. Prior to curing, the relined post must be removed and reinserted in the root canal to ensure good adaptation without locking. With the relined post reinserted, the composite is tack cured for 5 s. The complete composite photoactivation (20 s) is performed outside of the root canal. After the relining procedure, the composite surface is etched with 37 % phosphoric acid and rinsed with air-water spray for 20 s. Subsequently, an adhesive system is applied and light cured. The anatomical glass fiber post should be reinserted into the canal and satisfactory adaptation ensured before proceeding with the luting procedure.
This anatomic post reduces the volume of luting cement and adapts better to the canal wall. Because composite resin has an elastic modulus close to that of dentin, it creates a homogeneous stress distribution between the anatomical composite post and dentin surface that is similar to a sound tooth (Santos et al. 2010; Silva et al. 2011; Santos-Filho et al. 2014a). Anatomical posts relined with composite resin resulted in the highest fracture resistance compared with other methods (Santos et al. 2010).

Luting is an important step for the successful retention of fiber-reinforced posts. The type of resin cement and adhesive system, as well as the endodontic sealers that are used, determines the luting procedures.
There is a wide range of luting products available. Resin cements have potentially good mechanical and adhesive properties, but they can be complex and highly sensitive to the luting technique. Resin cements used for the luting procedure can be classified according to polymerization reaction: auto(chemical) activation, photoactivation, or dual activation (auto- and photoactivation). The literature shows that resin cements with dual activation generally attain higher bond strengths to root dentin.
Conventional resin cements are sensitive to root canal depths because a lower density of dentinal tubules in the apical region reduces the bond strength to root dentin. A literature review and meta-analysis of in vitro studies suggest that the use of self-adhesive resin cement might improve the retention of glass fiber posts in root canals (Sarkis-Onofre et al. 2014). Self-adhesive resin cements do not require a separate adhesive. The use of a self-adhesive cement involves chemical bonding of the cement with hydroxyapatite in root dentin and promotes mild dentin demineralization and infiltration. Therefore, these cements have chemical reaction and micro-retention. Recent studies have shown that the bond strengths of these cements are higher than those of conventional resin cements, being less susceptible to luting depth (Ferracane et al. 2011).
Luting procedures determine the success of fiber posts and if restorations are retained. Factors affecting the luting procedures are discussed elsewhere in this book. A unique technique highlighted in this chapter is a procedure in which a time delay is applied between the cement mixing and photoactivation. Such delay improves the bonding of dual-cured resin cement to dentin without diminishing the mechanical properties (Khoroushi et al. 2012; Faria-e-Silva et al. 2014). A rapid increase in cement viscosity by immediate light irradiation can hinder the reaction of acidic monomers with dental tissues and weaken the bond. Additionally, a delayed setting of dual-cured resin cement may reduce polymerization shrinkage stress. Regardless of resin cement type, 5-min delayed photoactivation improved the mechanical properties of resin cement and decreased stresses generated by post-gel shrinkage (Fig. 5.5) (Faria-e-Silva et al. 2014; Pereira et al. 2015). 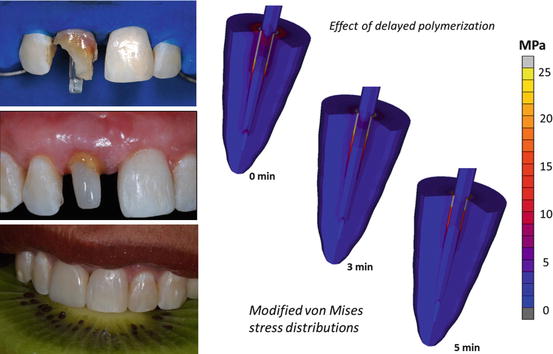