9: Management of Patients With Bleeding Disorders

Management of Patients With Bleeding Disorders

The aim of this chapter is to describe the impact of bleeding disorders on the delivery of dental care.

After reading this chapter you will have an understanding of how to manage the dental care of patients with bleeding disorders.

The most common cause of excessive bleeding is idiopathic, but it can also be caused by:

At some stage every clinician will encounter a patient who complains of excessive bleeding following certain procedures such as dental extractions. The most likely causes are a local problem, or the patient is on anticoagulant medication. However, post-operative bleeding may be one of the first signs of an underlying bleeding disorder, and a small number of patients may require referral for further investigation.

Haemostasis depends on interactions between the vessel wall, platelets and the clotting pathway. Once a vessel sustains an injury there is an immediate reflex vasoconstriction resulting in a reduced blood flow to the injured area. Damage to the endothelium also activates platelets and the clotting pathway. Activated platelets release agents which act as vasoconstrictors and adhere to collagen in the vessel wall, via specific receptors. The activated platelets spread along the vessel wall to form a subendothelium and the platelet membrane helps to provide a surface for the interaction of coagulation factors so that thrombin encourages platelet fusion. Coagulation is initiated by tissue factor in response to the injury and involves a series of enzymatic reactions (through the intrinsic and extrinsic pathways) leading to the activation of prothrombin and the conversion of soluble plasma fibrinogen to a stable fibrin clot, which is the end point of the clotting cascade.

A bleeding disorder arises if there is a problem in any part of the haemostatic or clotting pathways, and can be acquired or congenital.

Commonly used drugs include aspirin, or dypiridamol. Many people take aspirin (75 mg daily) to guard against ischaemic heart disease and deep vein thrombosis. This regime does not pose a significant bleeding risk to dental procedures. However, when used in combination, anti-platelet medications have a synergistic effect and impair platelet function for the platelet’s lifetime (half-life of 8–12 days).

Management for dental procedures: Current advice from the UK Medicines Information (UKMI) service is that anti-platelet medications (including aspirin in combination with clopidogrel) do not have to be stopped or altered before primary care dental surgical procedures. Locally applied measures are usually adequate to achieve haemostasis (Table 9-2).

Warfarin (a vitamin K antagonist) is the most commonly prescribed coumarin, and is used as prophylaxis or treatment in deep vein thrombosis, patients with prosthetic heart valves and people with atrial fibrillation. Warfarin prolongs both the prothrombin time and the activated partial thromboplastin time. Its effects are monitored using the International Normalised Ratio (INR). The usual INR therapeutic range for deep vein thrombosis is 2–3, and up to 4.5 for patients with prosthetic heart valves (Fig 9-1). Whilst there is no such thing as a “safe” INR, generally speaking, the higher the INR the greater the risk of prolonged bleeding. 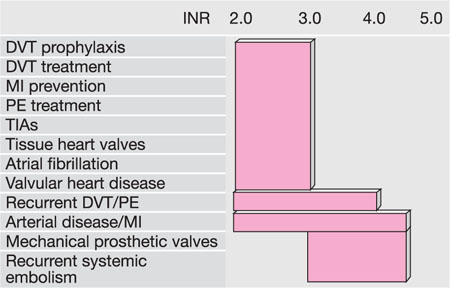 Management for dental procedures: Current UKMI advice is that:

The administration of inferior dental blocks is considered safe provided the INR is within therapeutic levels. Simple extractions can be carried out using local post-operative haemostatic measures in a general practice setting. People requiring complex/multiple extractions, with a poorly controlled INR, or an INR > 4, should be seen in hospital. It is considered safe to scale a patient on anticoagulants provided the INR is < 4. Even with this knowledge, it is sensible to scale around one or two teeth and observe how long haemostasis takes before proceeding further. Tranexamic mouthwash can be useful for arresting gingival haemorrhage, although its routine use is not recommended as it is expensive and difficult to obtain.

Monitoring the INR: Patients normally carry a record card of their INR readings, from which you can ascertain the average INR and the stability of its control. Erratic differences between INR readings suggest it is poor/>