Biofilms are complex microbial communities attached to a solid surface and embedded in an organic matrix, which makes them very resistant to removal and penetration by biocides. The biofilms with which dentists are most familiar is dental plaque and it can be appreciated that in that same way that the accumulation of plaques is difficult to control and remove, the control of dental unit waterline (DUWL) biofilms is also challenging to the dental profession.

As the water is continuously moving through the tubes of the working dental unit, how do the microorganisms find enough time to form biofilms? The answer lies in the properties of fluid dynamics and geometry of dental lines (Figure 9.1). A fluid in a tube moves in layers (laminar flow). At the centre of the lumen it travels fastest; the further away from this centre layer the movement becomes slower as a result of friction. Water at the tubing walls is virtually stagnant, allowing bacteria to adhere and colonise the internal surface.

DUWLs are colonised by bacteria derived from the incoming mains water and to a lesser extent by oral bacteria derived from suck-back through the handpiece. In untreated dental units, overnight stagnation and infrequent patterns of use result in amplification of the incoming organisms to form a biofilm on the inner surface of the DUWL (Figure 9.2). This effect is amplified as the DUWL acts as dead leg on the plumbing system. Most dental units are not in active use for an average of 131 hour/week. The DUWL biofilm, like dental plaque, forms rapidly and within a week it can be shedding high bacteria counts of up to 104–6 colony forming units (cfu)/mL into the waterline. Bacteria in biofilms are more resistant to treatment with antimicrobial compounds, ultraviolet light, metal toxicity, acid exposure, dehydration and phagocytosis than corresponding planktonic non-attached cells.

RISK TO STAFF AND PATIENT HEALTH FROM DENTAL UNIT WATERLINES

In the USA and Europe, major outbreaks of waterborne infections affecting, in some instances, thousands of consumers have fuelled widespread public concern regarding the microbiological quality of municipal water supplies. The public’s lack of confidence in water quality is illustrated by an exponential increase in sales of bottled water in many countries, even though the microbiological content of many of these products vastly exceeds that found in tap water. Similar concerns have been expressed over the poor quality of DUWL. The American Dental Association Council on Scientific Affairs stated that contact with water of poor microbial quality is inconsistent with patient expectations of safety and standards of modern dentistry. They set a goal that water used for dental treatment should contain ≤200 cfu/mL of aerobic heterotrophic organism, equivalent to drinking water quality. This figure is somewhat higher than the value set for potable drinking water in Europe of 100 cfu/mL of aerobic heterotrophic organism, but comparable with the department of health HTM 01-05, which stated that the total viable counts should lie in the range of 100–200 cfu/mL, which is considered to be achievable in dental practice in the long-term. This policy has been adopted by other dental governing bodies around the world and has set a challenge for dental equipment manufacturers. 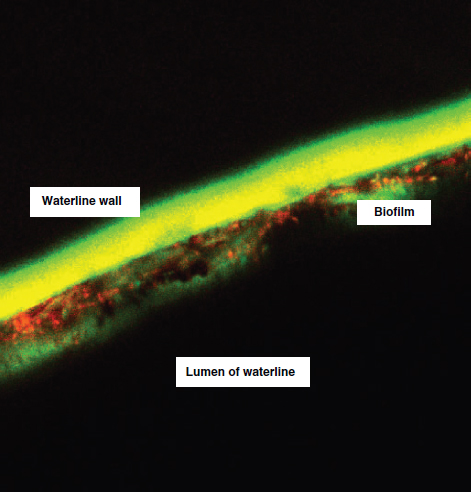 The majority of DUWL contaminants are Gram-negative aerobic environmental species which are non-pathogenic and do not cause infection in immunocompetent people although opportunistic respiratory pathogens, such as Legionella spp., Pseudomonas aeruginosa and non-tuberculosis Mycobacterium, are detected in a proportion of DUWL (Table 9.1). A review of the possible risks to health posed by DUWL had been published in 2007 and these will be considered below (Pankhurst and Coulter, 2007).

Legionellaceae are distributed worldwide in all types of aquatic habitats, generally occurring in low numbers. Legionellae may enter the DUWL from the mains drinking water and have the ability, under suitable growth and temperature conditions, to multiply and grow in the biofilm to reach the numbers reported between 102 and 105 cfu/mL. Typical DUWL temperature is 23°C and legionellae proliferate at temperatures between 25 and 42°C. Six to thirty per cent of domestic hot-water systems harbour legionellae and once established can persist for years. The reported prevalence of legionellae in DUWL varies widely from 0 to 68% depending, in part, on the isolation procedures. Variations in recovery rates of Legionella pneumophila type 1 are observed with different geographic locations (8% in the USA, 21.8% in Italy and 25% in London), presence of large cold-water tanks and complex plumbing systems, thermal conditions and the type of dental equipment.

There is a potential for occupational risk to the dental team and to vulnerable patients (Table 9.2) from exposure to contaminated DUWL aerosols.

Fortunately, the health risks associated with inhaling contaminated DUWL aerosols are thought to be exceedingly low in healthy individuals and there is no published evidence indicating that a patient has ever contracted Legionnaires’ disease in a dental chair. The UK national surveillance data found no association between dental treatment and Legionnaires’ disease. But there is no room for complacency as a dentist in the USA died from Legionnaires’ disease as a result of exposure to legionellae in his surgery’s DUWL.

Pseudomonads and related species are the predominant bacterial genera found in DUWL and have been isolated from up to 50% of DUWLs. Some of the species in the genera behave as opportunistic pathogens. P. aeruginosa accounts for 9–11% of reported nosocomial infections per annum in the USA and Europe, particularly affecting the immunocompromised, those on ventilators, burns patients and patients suffering from cystic fibrosis. The organism can thrive in low-nutrient environments such as distilled water. The latter is commonly employed by dentists as the water for DUWL reservoirs and steriliser reservoirs. Furthermore, pseudomonads grow readily in dilute disinfectants such as chlorhexidine and iodophors and express resi/>