The situation of the third molar may be described from inspection of a radiograph according to the following three observations (Figs 8-1a and 8-1b):

• The occlusal line, extended backward toward the ramus, makes an angle greater than 90 degrees with the great axis of the tooth. This angle indicates the degree of mesial inclination of the retained tooth.

• The alveolar ridge is represented by an imaginary curved line extending from the edge of the distal bone of the third molar to the top of the interdental septum of the first and second molars. This line must not be confused with the anterior border of the ramus, which is extended by the oblique line. The distal wall of the crypt most often indicates the level of the bone border. When the flap is lifted, the operator may observe the coronal portion of the tooth located above this alveolar line: The remainder of the tooth is embedded in the bone crypt.

• The depth of impaction corresponds to the distance that separates the cementoenamel junction from the alveolar ridge line. In this case the impaction area is located at the mesial level. It generally corresponds to the application point of the elevator. The dimension of this red line—drawn perpendicular to the bone border—indicates the degree of bone removal that is required (see Fig 8-1b).

• The depth of the impaction in the mandibular body

• The distance between the second molar and the ramus 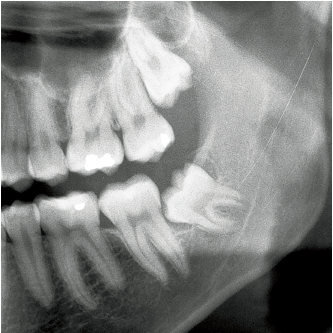 8-1a  Ratio B crown-collar; Class II. In this 16-year-old male patient, the left mandibular third molar is impacted in a submucosal situation. 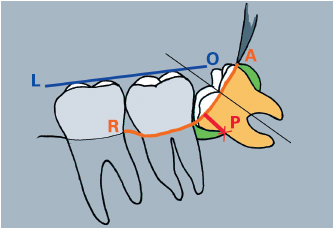 8-1b  Interpretation of a panoramic radiograph: OL, occlusal line; AR, alveolar ridge; P, depth of impaction (most apical area of the cementoenamel junction).

The depth of the impaction is assessed in relation to the second molar (ratios A, B, and C; see Fig 8-2) and generally indicates the degree of bone removal required. Therefore, the type of surgical procedure suggested will depend mainly on this factor. Extraction of an impacted third mandibular molar is considered to be straightforward if it can be carried out with little or no bone removal (Fig 8-3). For this to be the case, several conditions need to be met:

1. The crown of the retained tooth should be located at the level of the crown or the collar of the second molar.

3. The distal alveolar edge should not prevent the passage of the crown (see Fig 8-3). 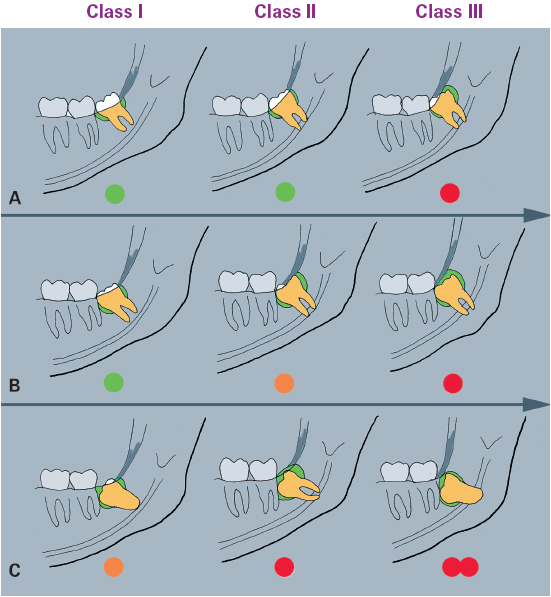 8-2  Degree of surgical difficulty. A, B, and C represent the position of the retained tooth in relation to the crown, collar, and root of the second molar (ie, ratios). Difficulties increase with the depth of the impaction. Classes I, II, and III correspond to the decrease in available space between the second molar and the ramus.

4. The widened pericoronal space should facilitate the distal luxation of the crown.

5. The roots should be short, parallel, or fused, but if this is not the case, root separation is indicated (Fig 8-4).

6. The roots should have no relationship with the inferior alveolar nerve.

• A mesial partial impaction is slightly marked if the crown is close to the occlusal plane. This type of extraction, in Class I or II, does not present any real difficulties. The tooth is luxated toward the back if there is no posterior bone obstruction. Before starting this elevation movement, the operator carefully examines the level of the distal alveolar crest.

• A distal partial impaction is sometimes severe in Class III. There will be limited bone removal and the operator may prefer to undertake crown sectioning.

• A lateral partial impaction occurs as a rule in Class II and III situations. Depending on how wide the patient can open the mouth, bone removal should be carried out with either a long perforating bur or a spindle-shaped bur mounted on a contra-angle. The lateral wall of the crypt can be removed by drilling that simultaneously penetrates the spongy tissue (Fig 8-5).

• Tooth sectioning is often indicated in Class II and III situations. If the roots are well separated, the section is made along the axis of the tooth up to the furca in order to create space between the fragments. If there is only one root, the distal wall will be sectioned as far as the collar. This fragment is easily removed because it has a large occlusal portion.

• Bone removal is now essential because the tooth is positioned at a greater depth than the body of the mandible. This will ensure:

• Complete exposure of the occlusal aspect (see Fig 8-6b)

• Sectioning may be undertaken:

• If there is a bifurcation of the great axis of the tooth. The roots can be separated using a spindle-shaped surgical bur directed perpendicular to the occlusal aspect of the tooth. The groove must reach the furca and completely cross the crown in order to create space between the fragments, which will facilitate their removal (see Fig 8-6d).

• Mesially by directing the bur from the />