The alveolar ridge is represented by an imaginary curved line extending from the crest of the distal bone to the top of the interdental septum of the first and second molars. If the tooth is close to the occlusal plane, the crown most frequently emerges via its mesial cusps, while its distal portion may remain within the ramus.

The decision to extract the tooth can be made during the process of eruption, as early as 10 years of age, even though root formation is not complete at this stage (Figs 10-3 and 10-4).

The maximum depth of crown impaction inside the bone tissue corresponds to the distance between the cementoenamel junction and the alveolar ridge (AR). It is measured at the distal portion of the crown (see Fig 10-2).

In this case the tooth is often aligned with the arch and its occlusal table is located at the level of the second molar. In Class I situations where there are no root problems, the tooth may be removed using forceps.

In Class II situations, exposure of the crest of the distal bone is essential to ensure the exposure of the crown’s greatest contour. The tooth is then lifted using a Cryer elevator, inserted at the level of the furca (see Fig 10-4). The fingers of the other hand are positioned on the lingual aspect against the bone table in order to retract the tongue and stabilize the mandible. Note that the roots of vertical third molars are often fused. However, if there is marked distal curvature of the roots, crown sectioning will facilitate tooth elevation (see Figs 10-8d to 10-8h).

In Class I situations, the difficulties that arise are mainly related to root morphology. In the presence of a widened pericoronal space, removal of the tooth may be straightforward if root formation is not complete.

• Exposure of the greatest contour of the buccal crown

The crown is sectioned along its great axis if the roots are not fused (see Fig 10-7, 6); however, the section line is oblique in the case of fused roots. It is then directed toward the distal collar, depending on the degree of mouth opening possible (see Fig 10-7, 3). The crown fragment is removed and the tooth lifted in a backward direction using the tip of a right elevator. The insertion point may also be lateral. The Cryer elevator blade is positioned in contact with the bone crest. A buccal notch made at the cementoenamel junction facilitates the vertical elevation of the tooth. 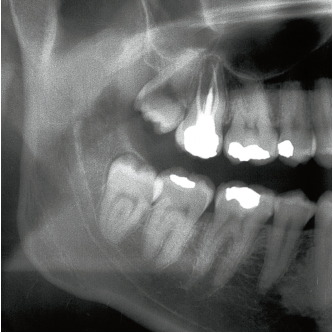 10-1  The right mandibular third molar is vertically retained in this 25-year-old female patient. Note the important superimposition of the proximal contact points with the second molar, indicating a buccal orientation of the crown.