8: Problems in the Transition of Mandibular and Maxillary Incisors

Problems in the Transition of Mandibular and Maxillary Incisors

Most children experience loosening of the central deciduous incisors as the first sign of the imminent transition from the deciduous to permanent dentition. The preceding increase in spacing between the deciduous incisors is scarcely noticed. It is commonly thought that deciduous teeth of a 5- or 6-year-old child are diminutive and that the successors, especially the maxillary central permanent incisors, are extraordinarily large. Both views are understandable and fit in with the picture of a continuously growing face in which the mesiodistal sizes of the crowns of the teeth do not increase. A maxillary central permanent incisor that emerges at the age of 7 years will normally not fit harmoniously into the face until facial growth has been completed much later. The transition of the incisors is often followed more carefully by the child and parents than other processes of the development of the dentition because these changes occur in the anterior part of the mouth, can be easily followed, and above all have a marked effect on appearance. It is also noteworthy that incisor transition is marked by considerable variation. Parents frequently become concerned, fortunately unnecessarily so.

Various aspects of transition in the incisor region are considered below. Disturbances in transition and their causes are discussed. In particular the consequences of traumata to deciduous teeth are dealt with. Thought is given to supernumerary teeth, hypertrophic frena, large multiple diastemata, reverse overbite, thumb-sucking, and abnormal tongue and lip posture. Taking records and making observations are covered. Finally, differential diagnosis of a large maxillary central diastema is described.

8.2 Asymmetries in times and positions of emergence

In the mandible, little difference exists between left and right as far as it concerns the time when deciduous teeth are lost and the moment when their successors emerge in the mouth. Normally, there is also little difference in the position at which teeth emerge, as long as the teeth are properly formed and no crowding exists.

In the maxilla however, the two central deciduous incisors usually do not exfoliate simultaneously, nor even close to the same time. Often there is a difference of a week to some months. After a short period (usually of some weeks) of local toothlessness, the successor breaks through. A difference of 6 months between the times of emergence of corresponding left and right incisors falls within normal variation limits. Pronounced asymmetry in the positions of emergence of maxillary teeth also commonly occurs. Depending on the conditions of space in the dental arches, the posture of tongue and lips and the way they function can improve the stance of incisors that originally emerged in anomalous positions. The same applies even more to mandibular permanent incisors that have erupted in irregular alignment.

When extraction of a deciduous incisor will be the first dental intervention experienced by the child, one should be particularly restrained because of the psychological aspects of the situation.72 Often it would be wise to only remove the tooth if it still exhibited little mobility, had a long root (palpate it), and if improvement in position of the successor within a short time is desired.

A large diastema between the maxillary central permanent incisors is often thought by parents to be disfiguring. A proper explanation, especially showing an example of spontaneous changes in a similar situation, normally will alleviate concern (Fig. 8-1). The central diastema usually diminishes with emergence of the lateral permanent incisors and totally closes when the permanent canines have reached occlusion.92 To close a central diastema actively before this time is usually irresponsible.22 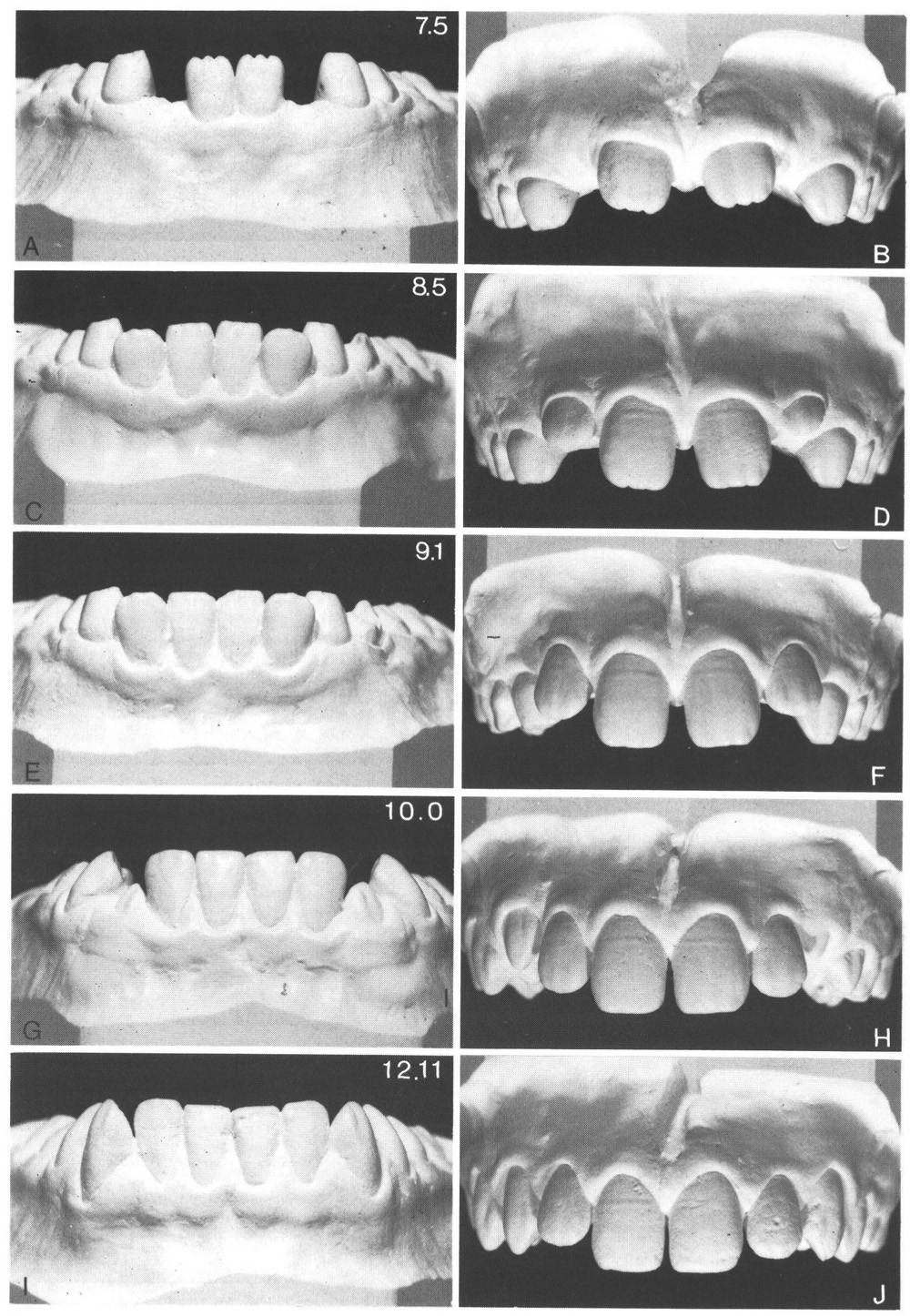 Fig. 8-1 Natural development of the dentition in a boy, showing changes in the mandibular and maxillary incisors during transition and some time after.

E, F At 9 years 1 month the distal surfaces of the mandibular lateral incisors are located labial to the mesial surfaces of the deciduous canines; the mandibular permanent incisors as a block are more labially placed than their predecessors were. The maxillary lateral permanent incisors have moved further occlusally. There is no contact anywhere between the four incisors. The central diastema has diminished further.

G, H At 10 years the mandibular permanent canines have emerged, more labially than where their predecessors had been. During the transition of the canines the lateral incisors’ positions have improved. Also, in the maxilla the permanent canines have emerged recently; they likewise take up a position more labial than their predecessors. There is now contact between the central and lateral incisors. The central diastema is still narrower.

I, J At 12 years 11 months there is good contact between mandibular canines and lateral incisors. The mandibular incisors are in regular alignment.
The maxillary canines have almost reached the occlusal plane. The central diastema is almost closed. The mesiodistal angulation of the incisors has improved ever since emergence until now, and this process continues.

This series of illustrations shows the spontaneous improvement in alignment over a period of more than 5 years and indicates that in the normal course of events there may be irregular situations that correct themselves and thus treatment of those conditions is definitely not acceptable. In general, the difference in times of emergence of corresponding mandibular and maxillary permanent teeth is greater than in this example. On average, maxillary teeth emerge about 1 year later than mandibular teeth. The numbers in the illustrations denote the age in years and months. (From Van der Linden.226)

8.5 Disturbances in the transition of maxillary incisors

When the permanent incisors have been laid down in a good position and spatial conditions in the maxilla are adequate (medium or large anterior section of the apical area) the transition of the maxillary incisors normally will proceed to a harmonious conclusion.

Disturbances in the transition of the maxillary incisors can be evident when:

1. There has been an injury in the deciduous dentition, which can lead to a diversity of consequences4

2. One or more supernumerary teeth are present near the median plane (mesiodens/ dentes)

4. One or more permanent incisors show extremes of form or size

5. A persistent hypertrophic frenum is present

6. Permanent incisors are developing in an abnormal position (e.g., rotations)

9. Eversion of the maxillary incisors is present

10. One or both maxillary lateral permanent incisors are abnormally narrow (pegshaped lateral incisors)

11. One or both maxillary lateral permanent incisors are genetically absent

The first five situations mentioned above are dealt with more fully; the last five are brought up in other chapters or have been treated in a previous book of this series.226

8.5.1 Trauma in the deciduous dentition followed by loss of vitality of a deciduous incisor

When a deciduous incisor that has been traumatized shows symptoms of loss of vitality, a periapical radiograph should be taken. If no evidence of a pathological process is seen on the film or in the mouth, it is reasonable to accept the situation and keep it under regular surveillance. Should a small periapical blackening be seen on the film and the patient is younger than 4.5 years, a nonvital pulp amputation should be performed. If the patient is older than 4.5 years, extraction is advised. In cases of a large radiolucent area or a fistula, removal of the tooth is advocated, regardless of age.30

A nonvital deciduous tooth has a tendency toward premature resorption, but trauma can also lead to ankylosis.

8.5.2 Loss of a deciduous incisor without damaging sequellae

A deciduous incisor may be dislodged without changing the position of its successor within the jaw and without resulting in disturbance of its further development; loss of a deciduous incisor with an already considerably resorbed root usually has this effect. The damage is limited to the loss of the deciduous tooth in question.

8.5.3 Loss of a deciduous incisor with damage to its successor

A deciduous tooth may be knocked out with damage to the permanent incisor. If the trauma occurs to a successor whose crown is not yet completely formed, this may lead to local enamel hypoplasia and white or yellow-brown discolouration and anomalies of crown form. If the trauma occurs when the crown of the permanent incisor is already fully formed, then the root can be injured. Such damage, in contrast to the effect on the crown, can be partly or wholly repaired because cementum has the potential for repair; enamel does not.

8.5.4 Loss of a deciduous incisor with displacement of its successor

As a result of trauma to the deciduous incisor, the permanent incisor may be displaced within the jaw. This leads not only to an abnormal position of the permanent tooth before emergence, it also changes its orientation with respect to the forming part of the tooth, which can result in a deviation in the long axis of the tooth (dilaceration).The displacement of the crown of the permanent incisor through trauma in the deciduous dentition is usually dorsal.7 Subsequent formation of the tooth involves tissues that have not been displaced joined to those that have indeed been displaced. This produces a kink in the eventual form of the tooth. The size of the deviation is related to the extent of the displacement; the location of the deviation is related to the degree of formation reached at the time of the trauma. The deviation can occur in the crown, though usual/>

Tags: Problems and Procedures in Dentofacial Orthopedics
Jan 1, 2015 | Posted by mrzezo in Orthodontics | Comments Off on 8: Problems in the Transition of Mandibular and Maxillary Incisors
Premium Wordpress Themes by UFO Themes
WordPress theme by UFO themes