Considering that pain has a neural basis, it is not surprising that much research in the area of pain modulation has focused on ways to alter pain perception by modifying or modulating the activity of several of the neural pathways described in chapters 5 and 11. Within recent years, it has become apparent that both pharmacologic agents (eg, opioids) and psychologic procedures (eg, the placebo effect, hypnosis, and distraction) can impair the perception of pain by modulating the neural systems that contribute to it. In this chapter, a brief overview of pain regulatory systems will be presented.

Figure 8-1 displays a simplified model of several elements of the nervous system that have been implicated in pain transmission and painmodulation. The activity within and between these integrative elements gives rise to the sensory, affective, and emotional responses to noxious stimuli. Each site within this model represents important areas or pathways that influence the way in which nociceptive information is perceived and interpreted. 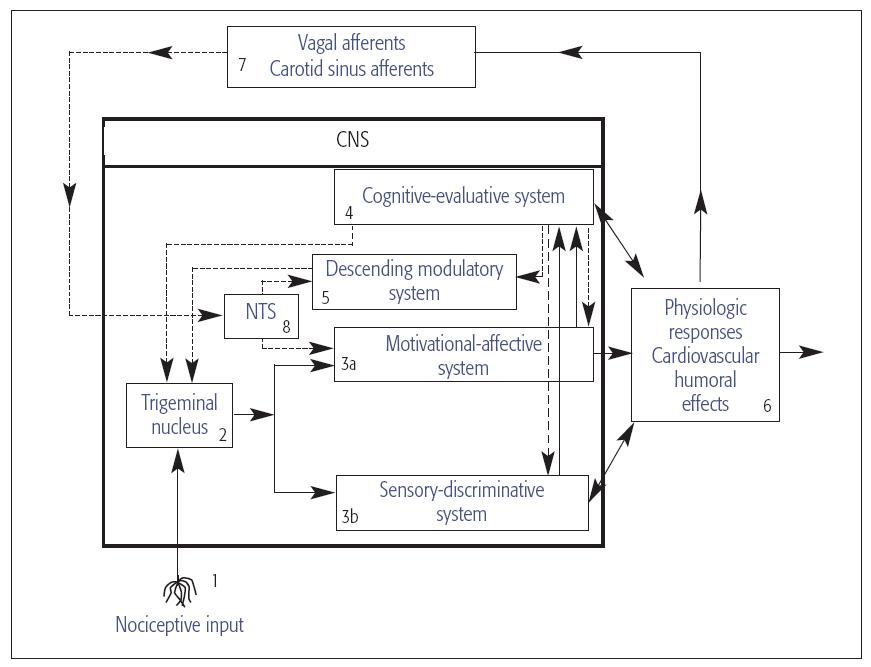 The peripheral terminals of A-δ and C-fiber afferents represent important areas where pain responses to tissue injury and inflammation are modulated (see Fig 8-1, site 1; see also chapters 4 and 6 for further review).2–4 The administration of local anesthetics (eg, sodium channel blockers) to the peripheral nerve terminals or to the nerve trunk blocks nociceptive transmission and peripheral inflammatory responses. Similarly, nonsteroidal anti-inflammatory drugs such as aspirin and ibuprofen are capable of altering nociceptive afferent excitability and can alter the hyperalgesia associated with acute orofacial pain conditions. The peripheral terminals of nociceptive afferents also contain membrane-bound receptors (eg, opioid, β-aminobutyric acid [GABA]). When, for example, the opioid receptors are stimulated by an opioid such as morphine, a reduction in the amount of substance P, calcitonin gene-related peptide (CGRP), and glutamate released from peripheral terminals by a noxious stimulus occurs. This process attenuates neurogenic inflammation and can suppress dental pain.2–4 Endogenously released opioid peptides from the pituitary, adrenal medulla, and immune cells can also impair inflammatory responses by acting on opioid receptors located on the peripheral terminals.4 The presence of opioid receptors on nociceptive afferent terminals has important implications especially apparent in the dentition, since teeth with an underlying pulpitis are frequently asymptomatic or nonpainful.

The synapses between primary afferents and neurons in the trigeminal brain stem nuclear complex (VBSNC) represent another important location for pain modulation (see Fig 8-1, site 2; see also chapter 5). The central terminals of nociceptive C-fibers also possess opioid receptors that, when stimulated, suppress the release of pain-producing neuromodulators.3 These receptors are stimulated by exogenously administered opioids given in a clinical setting. It is also known that endogenous opioid peptides (eg, enkephalins) and the inhibitory amino acid GABA are stored and released by intrinsic neurons in such regions as the substantia gelatinosa of the VBSNC and the dorsal horn of the spinal cord.2,5–7 The release of opioid peptides from these intrinsic or local inhibitory neurons acts to decrease the release of pain-producing substances from nociceptive afferents. In addition, endogenously released opioids, exogenously administrated opioids (eg, morphine), and GABA act directly on VBSNC and spinal nociceptive neurons that convey information to higher regions of the central nervous system (CNS). In this situation, more pain-producing substances from primary afferents are required to evoke neural transmission.

Several areas such as the thalamus, reticular system, limbic system, and various cortical regions play important roles in sculpting an individual’s perceptual, autonomic, neuroendocrine, and emotional responses to tissue injury (see Fig 8-1, sites 3a, 3b, and 4).8 The overall “mosaic” or composite of activity in these regions determines the perceptual experience, the emotional responses, and the meaning that we assign to painful stimuli. Given this knowledge, it is no wonder that pain is a highly personal experience that is susceptible to a variety of biologic, pharmacologic, and environmental influences (see chapter 11).

Over the course of the last 50 years, a considerable amount of research has been conducted on control mechanisms that regulate the transmission of nociceptive information from the VBSNC and spinal dorsal horn to higher regions of the CNS. Perhaps the best studied of these systems are those commonly referred to as the descending modulatory system.2,6,7,9,10

The descending modulatory system is composed of a group of structures in the brain stem, midbrain, subcortex, and cortex that form a network of descending projections to the VBSNC and spinal dorsal horn. Many of the neurotransmitters released from the terminals of fibers of these descending projections inhibit sensory transmission by impairing the ability of nociceptive neurons in the VBSNC and spinal cord to respond to noxious stimuli. Norepinephrine (NE) and serotonin (5-HT) are two such neurotransmitters whose cell bodies are located in brain stem sites. In addition to inhibitory neurotransmitters, descending control systems can also release neuroactive substances that augment the relay of sensory information through the VBSNC and spinal dorsal horn. One intrinsic substance that promotes the facilitation of nociceptive transmission is the endogenous opioid peptide dynorphin. This substance is synthesized and released in the VBSNC and spinal dorsal horn following the activation of descending facilitatory pathways.10 The release of brain-derived neurotrophic factor, a neurotrophin, also results in the activation of descending facilitatory pathways.

The complex anatomic organization of the descending modulatory system (Fig 8-2; see Fig 8-1, site 5) permits a wide array of physiologic, emotional, and perceptual responses to tissue injury. This system provides the neural basis for the analgesic responses associated with the placebo effect. It is now known that increasing a patient’s expectations that a drug will produce a powerful analgesic effect results in a substantial increase in the analgesic response. Increasing or modifying a patient’s expectations is a cognitive process associated with alterations in the activity of neurons in cortical and subcortical structures that modulate the activity of components of the descending control system originating in the midbrain and brain stem (see chapter 5). 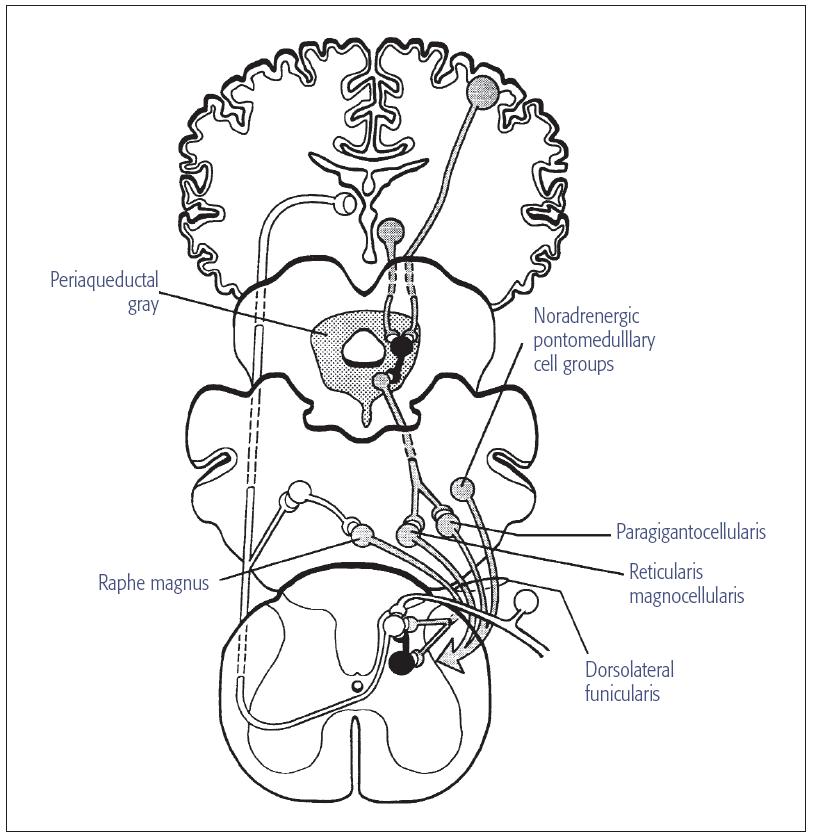 Fig 8-2 Diagram of descending neural pathways that modulate nociceptive transmission at the level of the VBSNC and spinal cord. Clear neurons represent cells that transmit nociceptive signals to the VBSNC, dorsal horn of the spinal cord, and supraspinal sites. The shaded lines represent neurons that descend to the VBSNC and spinal dorsal horn from supraspinal sites. The small dark interneurons release enkephalins when stimulated by neurotransmitters (eg, NE and 5-HT) released from the nerve terminals of fibers that contribute to the descending systems. The midbrain periaqueductal gray contains cell bod/>