6. Neurochemical Factors in Injury and Inflammation of Orofacial Tissues

Neurochemical Factors in Injury and Inflammation of Orofacial Tissues

As reviewed in prior chapters, orofacial pain is one of the most common types of acute or chronic pain, with odontalgia alone occurring in about 12% of the adult population.1 Many forms of orofacial pain have an inflammatory component. This chapter will discuss peripheral effects of injury, focusing on inflammatory pain and the role of peripheral neurons in inflammation and healing.

Two major theories for the detection of noxious stimuli by peripheral sensory neurons are the specificity theory and the pattern theory (see chapter 1). The former proposes that the perception of pain is due to activation of specialized sensory neurons (eg, nociceptors). The latter proposes that pain perception is due to intense stimuli that activate multiple classes of sensory neurons, producing a particular pattern of sensory input that results in pain. There is evidence for pain sensation occurring both by activation of specific nociceptors (ie, the specificity theory) as well as by combinations of nociceptors and non-nociceptors (ie, the pattern theory). Therefore, it is important to understand the contributions of both nociceptors and non-nociceptors to the perception of pain.

The response to tissue injury, infection, or inflammation is complex. Orofacial nociceptors can respond to tissue injury through several different ion channels and receptor processes (see chapter 4), but they may also respond to tissue infection. It has been demonstrated recently that a subclass of human trigeminal nociceptors, including those which innervate the pulp, express the toll-like receptor 4 (TLR-4) and cluster of differentiation 14 receptor (CD14) (Fig 6-1).2 This finding supports the hypothesis that pulpal nociceptors can directly detect bacterial endotoxin, and it suggests a direct mechanism of pain resulting from bacterial infection. Ion channels and receptors are also involved in nociceptor responses to inflammation. The tissue response to inflammation involves the coordinated release of multiple classes of inflammatory chemical mediators that display distinct profiles of substance concentration over time.3 In the inflamed peripheral tissue, the terminals of nociceptive primary afferents detect the presence of the mediators by receptors, that are expressed in the afferents’ cell bodies and then are transported to the periphery. If the mediator reaches a sufficient concentration in the inflamed tissue to activate the receptors, then the nociceptors could become activated (ie, membrane depolarization with conduction of the signal into the central nervous system [CNS]) or sensitized. Some nociceptive afferents may indeed be “silent” and not sensitive to peripheral noxious stimuli unless they are sensitized by mediators (see also chapter 4). A sensitized no-ciceptor displays spontaneous depolarization, reduced threshold for depolarization, and increased after-discharges to suprathreshold stimuli. Table 6-1 illustrates the effects of various inflammatory mediators on these indices of nociceptor activity and on pain perception. Some of these mediators may produce persistent effects. For example, expression of nerve growth factor (NGF) and its receptor tropomyosin-related kinase A (trkA) is increased in inflamed dental pulp, and a single injection of NGF to humans can evoke pain and so-called allodynia that lasts up to 1 month. Furthermore, nociceptors may have receptors (eg, opioid or β-aminobutyric acid) that can modulate their excitability and the substances they release (see chapter 8). 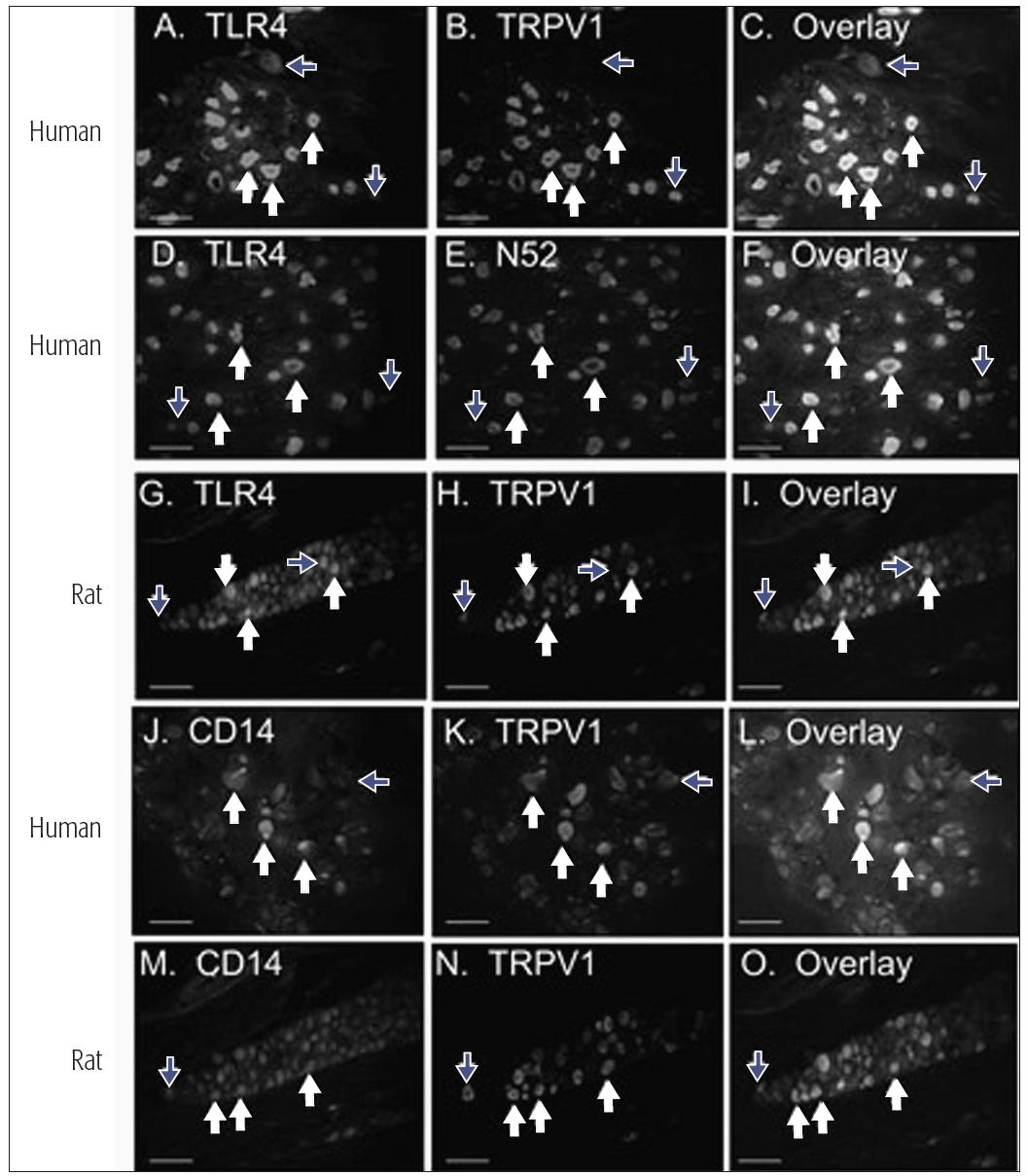 Fig 6-1 Expression patterns of TLR-4 and CD14 in V sensory neurons. White arrows indicate neurons expressing both markers, and blue arrows indicate neurons that express one but not both markers. Human V neurons were evaluated for co-localization of TLR-4 (panels A and D) and CD14 (panel J) with a marker for the capsaicin-sensitive subclass of nociceptors (TRPV1, panels B and C for TLR-4 and panels K and L for CD14), or a marker for myelinated sensory neurons (N52, panels E and F). Rat trigeminal neurons were evaluated for co-localization of TLR-4 with TRPV1 (panels G to I) and CD14 with TRPV1 (panels M to O). Reprinted with permission from Wadachi and Hargreaves.2

There are important clinical implications in this process of peripheral (nociceptor) sensitization, since it contributes to the altered pain states of hyperalgesia and allodynia. Hyperalgesia is an increase in pain respon/>