In general, the peripheral mechanisms of pain in the tissues innervated by the trigeminal (V) nerve are much the same as those in other parts of the body. However, the sensory receptors associated with pain in pulp and dentin appear to have rather different properties from other nociceptors; these differences may be more a result of the different environments provided by the tissues in which they are located than of fundamental differences in the receptors themselves. The pulp and dentin are also unusual in that virtually all the afferents that innervate these tissues seem to be capable of producing pain. Because of their particular clinical relevance to dentistry, this chapter will focus on nociceptive mechanisms in the dentin and pulp, but nociceptors in other orofacial tissues will also be mentioned because pain associated with them is also encountered in clinical practice.

General Features of Receptors Including Nociceptors

Those nerve cells with axons (ie, fibers) innervating peripheral tissues are termed primary afferent (sensory) neurons and can be divided into groups on the basis of their axonal diameter and degree of myelination, both of which influence axonal conduction velocity. Large-diameter axons conducting impulses (action potentials) in the 70 to 120 m/s and the 30 to 70 m/s ranges are called A-α and A-β afferent fibers, respectively. The smaller, finely myelinated axons are termed A-δ afferent fibers and conduct impulses at approximately 3 to 30 m/s, whereas unmyelinated axons, called C-fiber afferents, conduct impulses at 0.5 to 3.0 m/s. Many A-β afferents terminating peripherally in specialized sense organs (ie, receptors) are excited by light tactile stimuli applied to the peripheral tissues that they innervate and are termed low-threshold mechanoreceptors. In contrast, many of the A-δ and C-fiber afferents terminate in the peripheral tissues as free nerve endings that provide the peripheral basis for pain. They act as nociceptors; that is, they are the sense organs that are activated by noxious stimulation of peripheral tissues, and their activation may result in the production of action potentials in the small-diameter (A-δ or C) afferent fibers with which they are associated. The action potentials are then conducted along the fibers into the central nervous system (CNS), where they are processed so that the quality, intensity, duration, and location of the noxious stimulus can be perceived. The frequency of the impulses and the duration of the series of impulses in the nociceptive afferent fiber provide the peripheral basis for coding the intensity and duration of the noxious stimulus. The peripheral feature of importance for stimulus localization is the receptive field (RF) of the fiber: the area of skin, mucosa, or deep tissue from which an afferent fiber, or central neuron, and its associated receptors can be excited by a threshold stimulus. In the case of a nociceptive afferent fiber, the threshold for its excitation from its RF is extremely high and in the noxious range; the RF area is usually less than 1 mm2.

Nociceptive endings can be activated by a wide range of noxious stimuli, but their sensitivity may increase following mild injury (eg, when the threshold of the nociceptors is lowered by chemical agents or repeated noxious stimuli). This increased responsiveness, called nociceptor or peripheral sensitization, appears to be a major factor in the production of hyperalgesia and allodynia (see chapters 1 and 6). Biomechanical factors, such as tissue compliance, may also influence the responsiveness of nociceptive afferents. Sometimes after peripheral injury, afferent fibers may also fire spontaneously. A number of chemicals are involved in peripheral sensitization of these peripheral endings and their activation by noxious stimuli (see chapter 6), and some mechanically insensitive nociceptors (silent nociceptors) may be responsive only to chemical stimuli. The increased nociceptor activity inevitably leads to an increased afferent barrage into the CNS, followed by functional changes known as central sensitization (see chapter 5).

Dental pulp is a highly vascular and richly innervated connective tissue that forms the soft tissue core of a tooth. In many respects the pulp of a fully formed tooth has physiologic properties similar to those of loose connective tissue elsewhere in the body, but it is different in at least two important respects: (1) it is exquisitely sensitive, so much so that just touching exposed pulp with a wisp of cotton wool can cause severe pain; and (2) in a fully formed, intact tooth, it has a very low compliance. This low compliance is because of the surrounding calcified dentin, which prevents any significant volume change when the pressures within the tissue change. Because of this low compliance, the equilibrium between the various factors that affect blood flow and the circulation of tissue fluid in pulp is different from that in most other tissues. In contrast, dentin is an avascular tissue. Nevertheless, it can be highly sensitive despite its sparse innervation. While there is considerable evidence that stimulation of these tissues evokes only the experience of pain, there is some evidence that nonpainful sensations may be elicited under certain conditions.1–5

The innervation of pulp and dentin

The nerve fibers that innervate the pulp arborize extensively, especially in the coronal part of the tooth, and form a subodontoblastic plexus (Fig 4-1). The branches of the V nerve that innervate teeth contain both afferent and postganglionic sympathetic efferent axons.6,7 The V primary afferents have their cell bodies in the V ganglion and are primarily sensory in function, although some—when stimulated—produce vasodilatation, a component of neurogenic inflammation (see chapter 6). The sympathetic efferents supply pulp vessels (see Fig 4-1) and are vasoconstrictive. Their cell bodies are in the superior cervical ganglion, from which the axons pass to the V ganglion and then on to the tooth in the branches of the V nerve. Unlike the lip and some other orofacial tissues, there is no conclusive evidence that the pulp receives a parasympathetic vasodilator innervation. 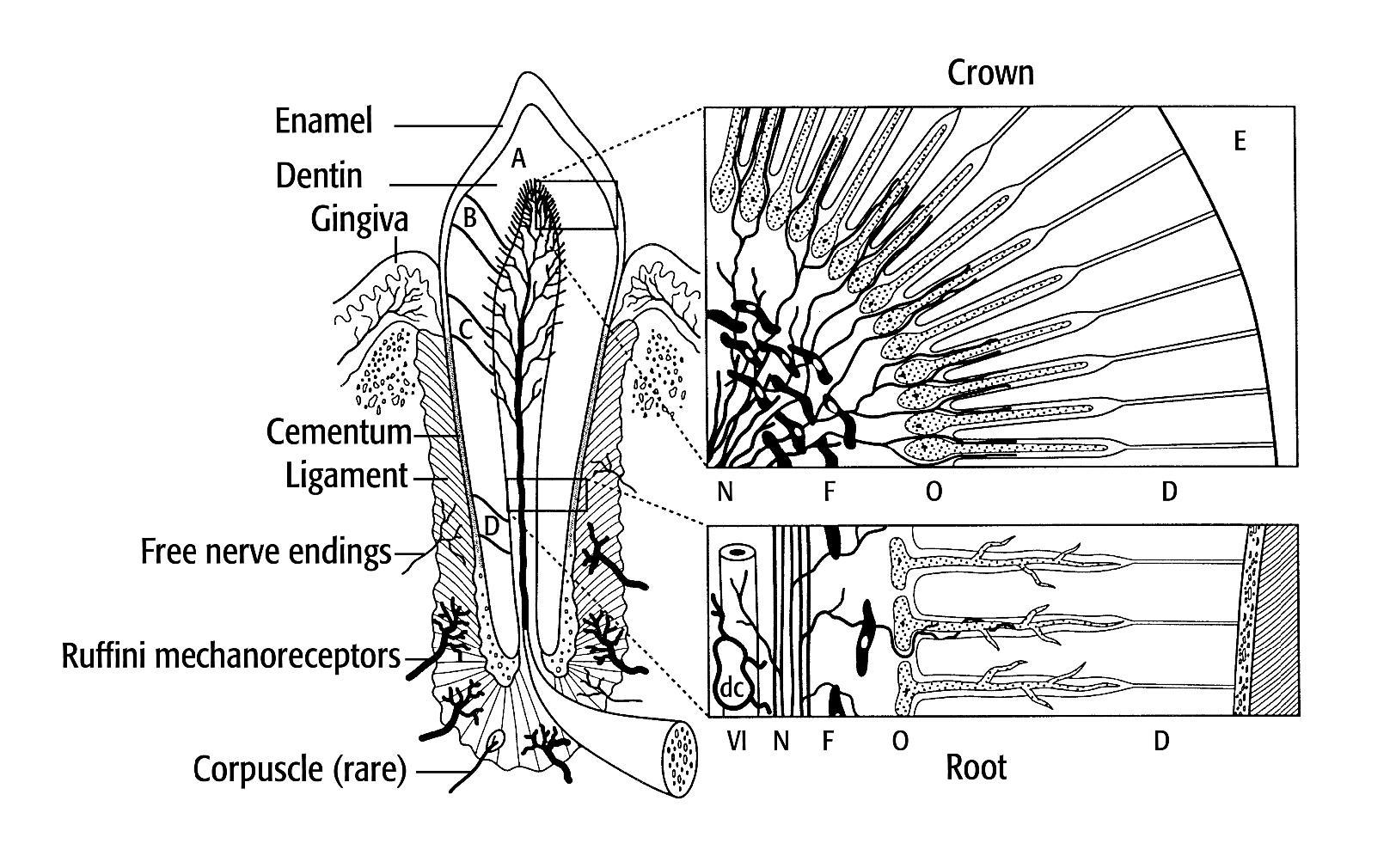 Fig 4-1 Schematic of a mature erupted tooth and its rich dentinal, pulpal, and periodontal innervation, with various structures indicated. More than 40% of dentinal tubules are innervated at the tip of the pulp horn (zone A), with decreasing percentages of innervated tubules in zones B (4.1% to 8.3%), C (0.2% to 1.0%), and D (0.02% to 0.2%). The higher-magnification panels show differences in intradentinal nerve (N) incidence, pulpal fibroblasts (F), odontoblast morphology (O), dentin (D), and enamel (E) for the crown and root. Perivascular dendritic cells (dc) and vascular innervation (VI) are shown in the root diagram. Reprinted with permission from Byers and Närhi.2

Classes of nerve fibers that innervate the pulp

The pulp is innervated by myelinated A-β and A-δ fibers and nonmyelinated C-fibers. About 50% of the myelinated axons are A-δ, which is surprising for a tissue whose afferent innervation appears to support only pain sensation. Histologically, the pulp appears to contain large numbers of small myelinated and nonmyelinated axons. However, this picture is distorted by the fact that the terminals of the axons in the pulp are smaller in diameter than their more central parent axons, as well as by the fact that axons myelinated in the nerve trunk outside the tooth may have unmyelinated terminals within the pulp. The number of nerve terminals in the pulp is also much greater than the number of sensory neurons that innervate the tissue because each neuron may have many terminal branches.

The innervation of dentin and the contents of dentinal tubules