8: Managing the Patient Having Radiotherapy

Managing the Patient Having Radiotherapy

The aim of this chapter is to describe the changes caused by radiotherapy to the head and neck region and the relevance of these changes to oral health.

After reading this chapter you will understand the factors that need to be taken into account when managing patients who will be having, or who have had, radiotherapy affecting the head and neck region.

The dental practitioner may be the first to notice cancers of the lip, tongue, mouth and pharynx. In the UK, for example, about 4400 new cancer cases occur in these areas each year, as well as other cancers in the head and neck region (Table 8-1).

Facts about oral cancer include:

Contributing factors to 80% of cases of oral cancer in developed countries are tobacco use and excess alcohol consumption. The risk associated with smoking is dose and duration related. Cessation leads to a fall in risk and after 10 years the risk is the same as for non-smokers. Other risk factors are outlined in Table 8-2. Increases in smoking and alcohol consumption are the likely reason for the increased incidence of oral cancer in under 45-year-olds. However, around 25% of younger patients who develop oral cancer, in particular women, have not been exposed to the known major risk factors.

Early treatment of oral cancer achieves better outcome with longer survival time and improved quality of life. Whilst population screening would not be cost-effective, dentists have the opportunity to screen their patients. Those with risk factors should be identified and given appropriate preventive advice. Those with suspicious lesions or premalignant conditions should be referred urgently to a specialist unit for investigation.

Treatment options depend on the stage of the tumour and include surgery, radiotherapy, surgery with post-operative radiotherapy, and radiotherapy with chemotherapy. Surgery and radiotherapy are equally effective in treating early disease, but surgery and post-operative radiotherapy give a better survival time in later disease. The aim of surgery is to remove the primary tumour, with an adequate tissue margin. Its use is appropriate where the tumour is accessible, large, invading bone and when the medical risk of an operation is acceptable. Radiotherapy is generally used for small tumours, inaccessible sites, and patients with poor risk for general anaesthesia. It may be used following surgery when there is a narrow excision margin, or to the neck where there is extracapsular spread from the lymph nodes. The advantages and disadvantages of surgery and radiotherapy are outlined in Table 8-3.

Radiotherapy is the use of ionising radiation to treat disease by damaging the cellular DNA. The radiation can be X-ray beams produced by high-energy electrons hitting an appropriate target or gamma radiation produced by decay of radioactive isotopes. External beam radiation with electrons produced in a linear accelerator is most commonly used in the head and neck region. Interstitial brachytherapy (placement of a radioactive source, usually iridium, in the tumour area) can be used in the mouth for small tumours. It causes fewer side-effects but requires special nursing procedures during treatment. Accurate positioning of radiation beams, confined to the tumour area, is important to ensure unwanted side-effects are minimised. To assist this, the area is immobilised during treatment through the use of a plastic head shell or mask worn by the patient and fixed to the treatment couch (see Fig 8-1). The actual radiotherapy treatment takes less than a minute in each field. 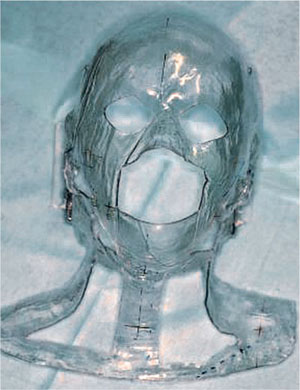 The unit of radiation dose is the Gray (Gy) which is a measure of absorbed energy (1 Gy = 1J/kg). Radiation schedules vary, but are typically 50–65 Gy divided into fractions over four to six weeks.

Adjuvant chemotherapy may be used with radiotherapy, depending on the tumour type, to decrease the local recurrence rate. At the present time fluorouracil and cisplatin are used. Palliative radiotherapy, lower dose and shorter duration, may be used for incurable cancers to reduce pain and to improve quality of life.

Effects of Radiotherapy in the Head and Neck Region

Radiotherapy causes both short- and longer-term general and oral side-effects (Table 8-4). One of the key recommendations of the National Institu/>