Many lawsuits are won or lost based on the quantity and quality of the documentation in the dental record.

When faced with adverse clinical outcomes and the threat of litigation, the clinical record becomes the subject of intense and expansive scrutiny. It is, as we suggested in Chapter 3, the equivalent of the black box in the aviation industry. Unlike the black box, which records all events, experience suggests that clinical records are often lacking in extent and accuracy of clinical information.

Evidence from studies carried out in the United States, Australia and Scandinavia show that record keeping often falls well below accepted standards. For example, Rasmusson et al. (1994) evaluated Swedish dental patient records and found that 40% of a random sample were not satisfactorily completed.

It is a well-known adage that “good records facilitate good defence, poor records a poor defence and no records no defence”. The quality of record keeping can also be used to assess the quality of patient care. Keith Marshall, a highly respected clinician in England, as part of his PhD thesis (1995) evaluated quality through records and radiographs and concluded that quality of care could be evaluated through audit of records. He concluded that consensus standards may be one way forward towards effective quality assurance. His work has provided the backbone of a number of quality initiatives which will be the subject of a future title in this series.

From a different perspective, the dental record is also of value as an ante-mortem record in forensic dentistry (Rene et al. 1994).

What Constitutes a Clinical Record?

Clinical records comprise all information relating to the care and treatment of the patient. They include:

What Information Should be Included in the Record?

Guidance on what information should be included in the clinical records is available from a number of sources.

The guidance issued by the Faculty of General Dental Practitioners in the UK is summarised in Fig 7-1. Guidance on what is an acceptable standard is summarised in Fig 7-2. In the US, The American Dental Association’s Risk Management Series, Even Good Guys Get Sued, sets out what it considers to be essential requirements (Table 7-1). 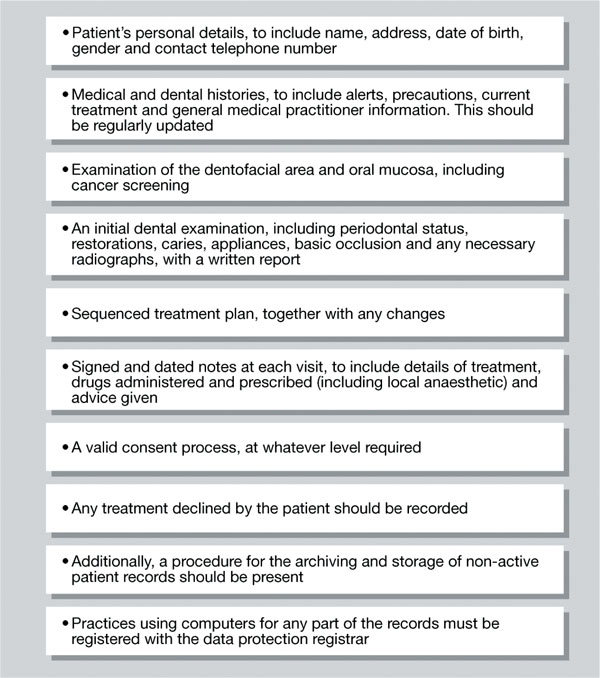 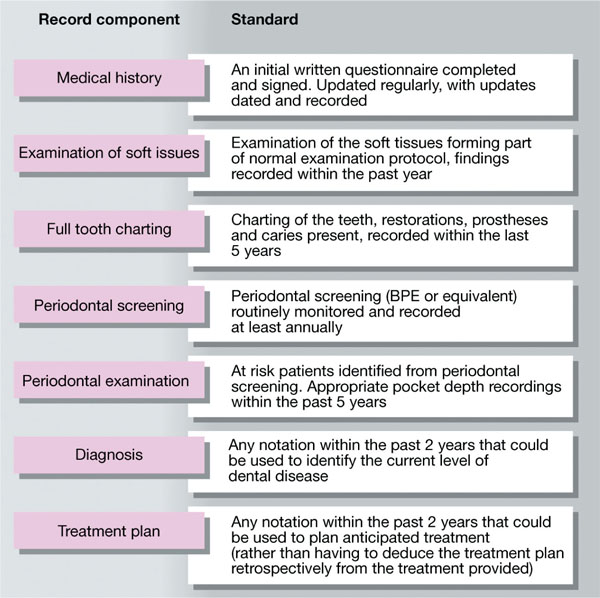 Anyone looking at the record should be able to answer the following questions:

The design and layout of the record will play an important part in how easily this information can be gleaned. It should provide “at a glance” information. This has been confirmed by Holt (1998) who reported, through an audit, on the effectiveness of “at a glance” information on a new dental chart. Similar findings have been reported by a team at Bristol Dental School who conducted an audit into record cards between 1994 and 1999. The failings were addressed by a number of changes, which included the redesign of the record card. The re-audit in 1999 confirmed that use of the new cards had maintained a high standard of record keeping achieved after the first audit.

How Much Detail Should be Included?

The most common failing in clinical record keeping is a lack of detail.

Many dentists do not record “custom and practice” (e.g. we tell every patient to avoid biting their lip after a local anaesthetic so there is no need to record it in the notes). That may be accepted until there is a significant injury and the patient sues the practitioner on the basis that they were not given such a warning. A dentist is exposed to a line of questioning that may suggest that despite it being his/her custom and practice, the dentist might not have told the patient in that particular case.

A way around the “custom and practice” issue is to have a range of information sheets about the warnings and advice that are given to all patients. This can be easily achieved with the use of computers and/or word processors. The advantage is that a copy of the instructions can be placed into the patient’s notes, thus saving time and acts as a very accurate record of the exact instructions and wording given to the patient. There are a number of stages in good record keeping.

When you first see a patient it is important to take a detailed record so that you can recollect: