Periodontal disease affects many people, and those who use lasers are beginning to understand why procedures, such as scaling and root planning (SRP), have not been effective treatments against the disease. However, the chapter first begins with a review of what periodontal disease is.

The word periodontal literally means “around the tooth,” and periodontal (gum) disease is a chronic bacterial infection that affects the gums and bone supporting the teeth. This disease can affect one tooth or several teeth at the same time. It begins when the bacteria in plaque (the sticky, colorless film that constantly forms on the teeth) or biofilm, a colony-forming ­microorganism, causes the gums to become inflamed. Periodontal diseases, including gingivitis and periodontitis, are serious infections that left untreated can lead to tooth loss.

Approximately 75% of adults in the United States are affected by some form of periodontal disease. However, recent research conducted by the American Academy of Periodontology (Research, Science and Therapy Committee of the American Academy of Periodontology 2001) and the Centers for Disease Control and Prevention (CDC) suggest that the rates of rates may have been underestimated by as much as 50%.

Some basic facts about periodontal disease:

Periodontal disease is an inflammatory disease that affects the soft and hard structures that support the teeth. In its early stage (gingivitis), the gums become swollen and red as a result of inflammation, which is the body’s natural response to the presence of harmful bacteria. In the more serious form of periodontal disease (periodontitis), the gums pull away from the tooth and supporting gum tissues are destroyed. Bone can be lost, and the teeth may loosen or eventually fall out.

Periodontal disease is often silent, meaning symptoms may not appear until an advanced stage of the disease. Often, this destructive process has mild symptoms; this is unfortunate because if it was painful, then patients would request treatment. Many patients are oblivious that they may have gum ­disease present and may not want to listen to their dental professional. Although, periodontal disease is becoming a topic of discussion within the world now, patients are more open to hearing it when diagnosed with gum disease.

Chronic periodontitis, the most advanced form of the disease, progresses relatively slowly in most people and is typically more evident in ­adulthood. Although inflammation as a result of a bacterial infection is behind all forms of periodontal disease, a variety of factors can influence the severity of the disease. These factors include: stress, tobacco use, genetics/heredity, pregnancy, diabetes, medications, nutrition, systemic links, occlusion, age and lack of adequate home care. Stress can make it more difficult for the body to fight off infection, including periodontal diseases.

Recent studies have shown that tobacco use, drug and alcohol use, and the lifestyle of a person, use may be some of the most significant risk factors in the development and progression of periodontal disease. In addition, ­following periodontal treatment or any type of oral surgery, the chemicals in tobacco can slow down the healing process and make the treatment results less predictable. This is why many specialists may choose to refuse treatment on those individuals. With the patient who smokes, continued tobacco use can severely compromise the success of periodontal therapy. An excellent treatment plan executed flawlessly with the latest technology does not guarantee a good result unless the patient is ready to participate completely with the clinician. Sometimes it is the human factor of a case that is the most difficult to treat.

Research shows that smokers lose more teeth than nonsmokers do. In fact, according to data from the Centers for Disease Control and Prevention, only about 20 percent of people over age 65 who have never smoked are toothless, whereas 41.3 percent of daily smokers over age 65 are toothless.

Fear of the unknown can be another factor that patients develop periodontal disease. Maybe they had previous experience that was unpleasant. Or they could be completely fearful of receiving a shot at the dentist.

Genetics can play a huge part in inheriting gum disease; studies show that they can be at risk six times more than those who do not have problems in the family history.

Hormonal changes can take its toll of a female’s body; many changes will take place in a woman’s body during puberty, pregnancy, and menopause that affect gum tissue.

Stress can make it more difficult for the body to fight off infection, including periodontal diseases.

Local oral factors can contribute to a patient’s periodontal disease, such as, overhanging restorations, poor margins, calculus, malpositioning, and poor oral hygiene (discussed later as one of the major contributing factors).

Some patients have been neglectful toward their teeth for a variety of reason, including financial, apathy, or lack of hygiene eduction.

A diet low in important nutrients can compromise the body’s immune system and make it harder for the body to fight off infection. Because periodontal disease is a serious infection, poor nutrition can worsen the condition of the gums.

There are hundreds of prescription and over-the-counter medications that can reduce the flow of saliva, which has a protective effect on the mouth. Without enough saliva, the mouth is vulnerable to infections such as gum disease. And some medications can cause abnormal overgrowth of the gum tissue; this can make it difficult to keep gums clean.

Severe wear on the teeth can cause premature wear and recession, allowing breakdown of the gum tissue.

And finally home care, when a person does not take proper care of their dental health, the gums do what they can to withstand the breakdown ­process, but after time, the bacteria will win, allowing the gums to be affected.

Periodontitis begins with plaque and biofilm (Figure 5.1). The term biofilm is a community of bacteria enclosed within their own mucinous, gellike polymer secretions; this complex protects pathogenic bacteria from exogenous attack (i.e., antibiotics) and endogenous attack (i.e., host inflammatory response, chemotaxis, and leukocytes). Plaque is a mushroom-shaped ­bacterial colony, and over time, a slimy skin (i.e., exopolysaccharide) forms over the colony. As the biofilm develops, microenvironments form inside the structure; channels through the mushrooms serve as primitive alimentary canals (Gurenlian 2007). As the biofilm ages, it becomes more impregnable and resistant to antibiotics, antimicrobials, and host response. The most destructive of all periodontal pathogens are the free-floating, loosely adherent anaerobes. Mechanical destruction is the only way to eliminate a biofilm (Wilson 2001). Once a mature subgingival biofilm has developed or dental calculus is present, home care is ineffective and clinical care is required (National Institute of Dental and Craniofacial Research 2011). Within 48 hours of the dental biofilm formation, sufficient numbers of ­periodontopathic anaerobes are established for the onset of gingivitis (Christgau et al. 2006). 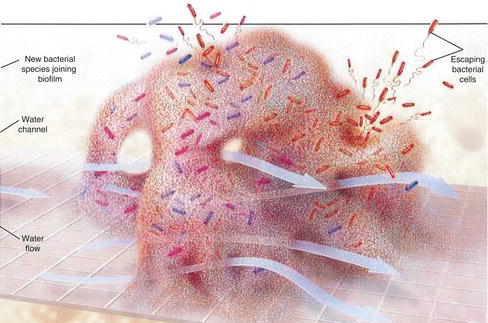 How many patients bleed? Most if not all! Hygienists understand this as periodontal therapists. However, hygienists and patient take the disease process for granted, often overlooking bleeding as if it is “/>