The US Food and Drug Administration (FDA) has cleared the use of the types of lasers discussed in this chapter for dental use. These are carbon dioxide (CO2), erbium, neodymium:yttrium-aluminum-garnet (Nd:YAG), argon, holmium:yttrium-aluminum-garnet (Ho:YAG), and the diode lasers. Dental lasers are a family of instruments; some are used for surgery; some cure restorative materials and enhance tooth bleaching; and others remove tooth structure for elimination of disease and restoration.

Lasers available in dentistry today are soft- and hard-tissue lasers. The diode and the Nd:YAG lasers will be discussed in more detail throughout this chapter, whereas the other lasers discussed will have a briefer ­description. The reader is encouraged to research any specific laser that is ­mentioned herein that meets specific dental needs.

The Alexandrite laser, 377 nm, is not readily available in the United States at this time; however, it may become available at a later time. 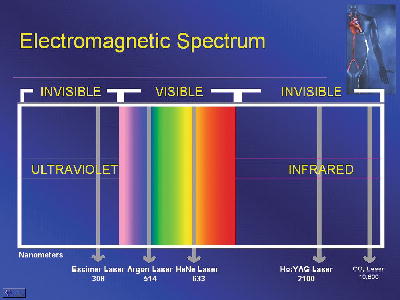 The Argon laser, 488–515 nm, is used for minor surgery and has an active medium of argon gas. With this laser, the energy passes through the laser’s ion gas head and is reflected off mirrors. It then generates laser light that is directed through a flexible silica-quartz fiber, which allows for easy use by the dental clinician. However, the argon laser is used primarily for surgery, composite resin placement, enamel and dentin bonding procedures, ­preventive dental therapies, and endodontic procedures. This laser is located in the visible green and blue portion of the EM spectrum and because of these short wavelengths it can be focused onto a small area. A great deal of energy goes into this laser and because of its low efficiency, a great deal of heat is produced, and it must be removed frequently during use to avoid blistering. High-power (more than 3 watts) Argon lasers should be used with a water cooling system. The Argon laser has been invaluable to a broad spectrum of dental surgeries, that is, until diode lasers became more prevalent. It absorbs melanin and hemoglobin, like diode lasers, and has many of the same applications. However, it is in the visible portion of the EM spectrum. It also has the versatility to vaporize, coagulate and cut (Dixon, Davis, and Gilbertson 1986; Hohenleutner and Landthaler 1991; Neumann and Knobler 1990).

Figure 4.3 Coefficient of absorption for various components in tissue. 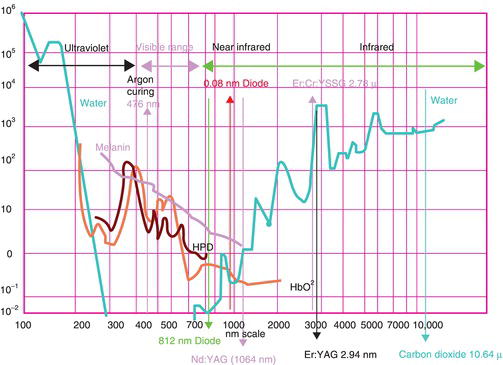 Table 4.1 Coefficients of Soft- and Hard-Tissue Lasers and Absorption Characteristics of Dental Lasers.

The He:Ne laser, 633 nm, is one that most consumers recognize. One example of this laser is simply a laser pointer that is combined with many of the lasers in dentistry. It allows the dental professional to see where he or she is aiming the laser and what needs to be accomplished during a procedure in the oral mucosa.

The diode laser, 812–1064 nm, is a solid laser that has a semiconductor chip that works like an electrical diode. The energy of a diode laser can cut soft tissue and reduce bacterial counts in the periodontal pockets (Gross 1994). There is evidence that the diode laser may reduce both gingival inflammation and the need for local anesthetic during surgical procedures (Lin, Beck, and Matsue 1992; Tam 1999). The active region of this laser, the diode, is a made up of many layers of different semiconductor materials. The first layer is a p-type material, which is a carrier of positive charge or electron holes; next is a nonconductive band-gap layer, which is the junction; and then an n-type material, which is the negative charge or free electrons. If a negative voltage is applied to the n material and a positive voltage is applied to the p material, this sends a flow into the junction and electrons fall into the holes and energy is released.

Most of the time, the energy is released as heat because these lasers are in the thermal radiation category and have wavelengths in the red and near infrared on the EM spectrum (Pick 1993). Diode lasers have a nonionzing effect on tissues, so therefore they are nonmutagenic. The energy can also be released in materials such as gallium, aluminum, and arsenide as a photon. These types are light-emitting diodes (LEDs) and are delivered to the oral cavity through an optic fiber and can be either in continuous wave (CW) or pulsed mode. The diode wavelengths are determined by the semiconductor material and the operating temperature. Each diode laser has a different output power from machine to machine. Additionally, for a diode laser to operate, it must have a reflective surface at either end of the junction to establish an optical cavity and be absorbed into its target tissues.

A diode laser absorbs melanin and hemoglobin as its target tissues, which makes it only for soft-tissue applications. The laser energy is absorbed by tissue and allows for surgical excision and coagulation to occur. This photothermal effect takes place when the laser light (laser energy) is absorbed by tissue and converted into heat, which enables tissue temperatures to rise. This device, then, can be used in place of the scalpel and electrosurge within dentistry for better photobiological effects (e.g., healing, biostimulation, less bleeding, and more comfort) of the tissue. This particular laser works well for dark pigmented areas, such as diseased tissue. Because of the specificity of lasers is that they focus only on these target tissues, it will leave healthy tissue alone and only seek infected tissue, melanin, and hemoglobin when used under the correct parameters. Additionally, the output from several diodes in an array can be combined to boost output power up to 100 watts (Pick, Pecaro, and Silberman 1985). However, for dental use, the power output should generally be used on CW from 0.6 to 2 watts and on the pulsed mode from 1.5 to 7 watts.

In comparable studies, the diode laser has been shown to have similar tissue effects as the Nd:YAG laser but with less thermal effects on the deeper tissues (Rastegar et al. 1992; Wyman et al. 1992). Thus, the diode laser is one of the most popular lasers used in dentistry at this time. Some of the clinical applications used with this laser are:

The Nd:YAG laser, 1064 nm, is a solid-state laser that has a lasing medium suspended into a garnet crystal, which contains yttrium and aluminum that are used for all YAG lasers and specifically for this neodymium laser. The energy used in the YAG lasers produces more energy than those in the carbon dioxide (CO2) lasers and this allows the wavelengths to be shorter and near infrared, which has a nonionzing effect on tissues and are ­therefore nonmutagenic. These YAG lasers are delivered using an optic fiber to the oral cavity and can be either in CW mode or pulsed mode. However, most of the time, they are used in the free-running pulsed mode (Myers and Myers 1985). The ability to perform procedures at a low-level power setting creates for a unique machine and a positive feature of the free-running pulsed mode because the aim should always be to use the smallest amount of energy to achieve therapeutic goals. The YAG portion (crystals) of the laser is the about the size of an adult pinky finer and a small amount of neodymium is impregnated into the surface of the crystal. The Nd:YAG absorbs melanin, water, and dentin as its target tissues. This laser can be used to remove carious lesions without damaging the ­surrounding tooth enamel and with minimal discomfort. In addition, this laser is used for many other dental applications:

This laser works much the way that the diode laser does. The interaction of the laser wavelength and energy density with the tissue at the tip of the fiber optic allow for cutting a/>