Concepts of occlusion in the early twentieth century were based primarily on the rehabilitation of totally edentulous patients with complete dentures. At the time, a relatively large segment of the population was edentulous, in part because of the wide-spread acceptance of the focal infection theory (Goymerac and Woollard, 2004). Complete mouth extraction was commonly prescribed by physicians for patients with systemic diseases in an attempt to eliminate any oral infections that were assumed to act as focal infections and cause the systemic disease.

Concepts of centric relation evolved as dentists refined their treatment methods for edentulous patients (Hanau, 1929). It was observed by many dentists that the mandible of an edentulous patient could be guided upward and backward to a stable, repeatable position. In this position, the mandible appeared to hinge or rotate about an axis (Figure 5.1). Because these dentists assumed that each condyle was centered in its respective glenoid fossa when the mandible reached this position, the position was referred to as centric relation (Hanau, 1929). Many dentists believed that the condyles were in the most retruded position when the mandible was in centric relation (Thompson, 1946), and by the latter half of the twentieth century, most definitions of centric relation described it as the most retruded mandibular position. It was also assumed, at the time, that the condyles were in centric relation when a dentate patient brought together the maxillary and mandibular opposing teeth (Niswonger, 1934); therefore, the position with the opposing teeth fitting together was referred to as centric occlusion. Posselt’s (1952) research on mandibular movements clearly demonstrated that, with most patients, the condyles were not in centric relation when the teeth fit together best. He suggested the term intercuspal position (ICP) to designate the best fit of the teeth, rather than centric occlusion.

American dentists ignored Posselt’s suggestion and continued to use the term centric occlusion to designate the ICP. Finally, in 1987, the Glossary of Prosthodontic Terms, fifth edition (Academy of Prosthodontics, 1987), introduced the term maximum intercuspal position (MIP) (later modified to maximal intercuspal position in a subsequent edition of the Glossary) as the designation for the best fit of the teeth. The term centric occlusion was not abandoned but was redefined as “the occlusion of opposing teeth when the mandible is in centric relation” (Academy of Prosthodontics, 1987), a position that may or may not coincide with MIP. In that fifth edition of the Glossary, centric relation was also redefined as, “the maxillomandibular relationship in which the condyles articulate with the thinnest avascular portion of their respective disks with the complex in the anterior-superior position against the slopes of the articular eminences. This position is independent of tooth contact. This position is clinically discernible when the mandible is directed superiorly and anteriorly. It is restricted to a purely rotary movement about the transverse horizontal axis.” This definition was based on a new understanding of the physiology of the temporomandibular joint (Figure 5.2). Centric relation was not relocated; it was redefined. In 1995, McDevitt et al. conducted a magnetic resonance imaging study of a group of patients and confirmed the validity of the new definition.

It has become universally accepted that the MIP for a totally edentulous patient should coincide with centric relation. This concept was later applied to patients with natural teeth. Many dentists believed that a natural MIP that did not coincide with the centric relation position was a malocclusion, while others disagreed.

Developing an MIP that coincides with centric relation provides denture stability in MIP; however, mastication is not restricted to pure hinge movement. Mastication involves lateral, protrusive, and retrusive three-dimensional movements. Arranging the artificial teeth of complete dentures to allow simultaneous contact of the teeth in eccentric positions can enhance denture stability, uniformly distribute the forces directed to the edentulous ridges, and improve masticatory performance and patient comfort (Ohguri et al., 1999; Khamis et al., 1998; Sutton and McCord, 2007) (Figure 5.3). Dentists noticed, empirically, that if the artificial teeth for complete dentures were set to balanced articulation (cross-arch, cross-tooth balance, whereby all teeth contact without interferences in all eccentric positions), there appeared to be less resorption of the edentulous ridges, and the dentures were more stable during mastication. Balanced articulation became the gold standard for complete denture occlusion.

Figure 5.1. When the mandible is in centric relation it rotates about an axis. 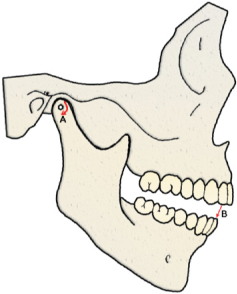 Figure 5.2. The current definition of centric relation describes condyles as articulating with the thinnest avascular portion of their respective disks with the complex in the anterior-superior position against the slopes of the articular eminencies. 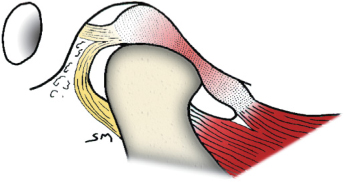 Figure 5.3. Thirty-degree anatomical teeth have been arranged in wax with balanced articulation. A, MIP; B, working side contacts; C, nonworking side (balancing-side) contacts; D, contacts in protrusion. 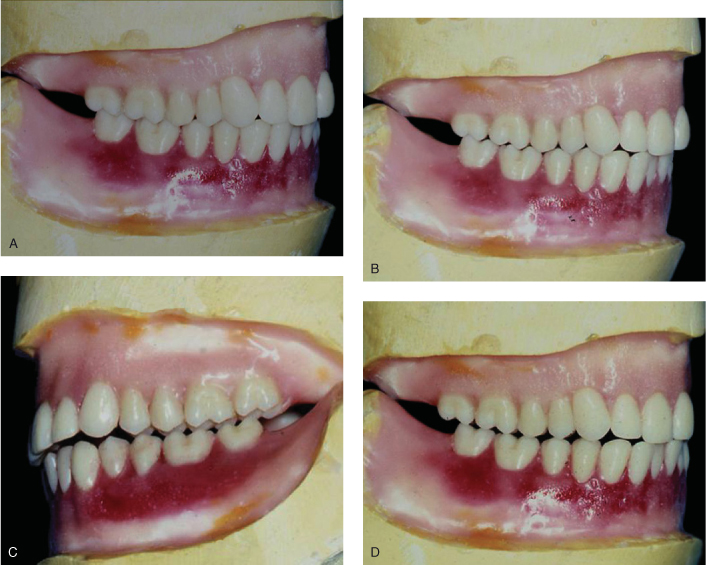 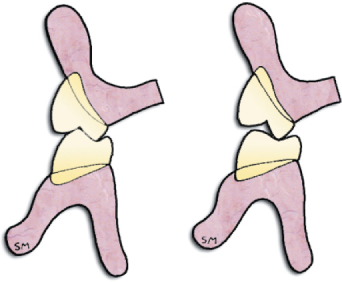 Figure 5.5. With lingualized occlusion, there is cross-arch balance but no cross-tooth balance. 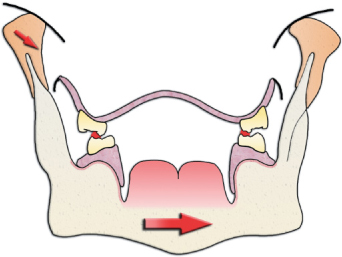 A modified form of balanced articulation was described by Payne in 1941. Payne suggested an arrangement of the artificial teeth with cross-arch balance, but not cross-tooth balance (Figure 5.4, 5.5). The term lingualized occlusion was later used to describe this method of developing an artificial occlusion (Pound, 1970). This occlusal concept has become popular and is commonly advocated for implant-supported removable prosthodontics. Clinical and in vitro studies have shown that balanced lingualized occlusion can be as effective as classical balanced articulation (Ohguri et al., 1999; Khamis et al., 1988; Sutton and McCord, 2007). 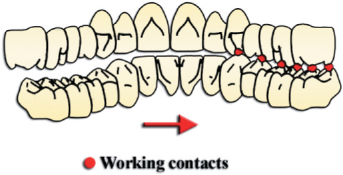 With advances in materials and techniques in the 1930s and 1940s, it became possible to rehabilitate a natural dentition with fixed restorations. Early attempts to provide complete-mouth rehabilitation with fixed prosthodontics used occlusal concepts that were established for complete denture prosthodontics; i.e., balanced articulation was prescribed. It is understandable that dentists would attempt to mimic an occlusal scheme that was highly successful for edentulous patients. It was obvious that balanced articulation resulted in dentures that did not loosen; also, with occlusal balance, there appeared to be less bone resorption beneath the dentures. At the time, the cause of periodontal disease was obscure. The term dental plaque did not exist. Many dentists assumed that bone loss around natural teeth was the result of occlusal overload. Balancing the occlusion was assumed to be a method to uniformly distribute the forces of occlusion and avoid occlusal overload. 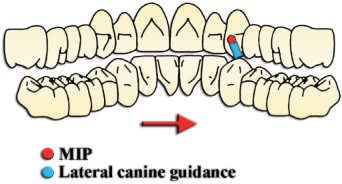 Throughout the 1960s and 1970s there was considerable controversy concerning the best eccentric occlusal scheme for a fixed prosthodontic oral rehabilitation. Group function was considered optimal by some dentists, primarily periodontists, because empirically it appeared that simultaneous contact of all teeth on the working side in a lateral occlusal position would uniformly distribute forces among all teeth. Nevertheless, most prosthodontists were advocating anterior disclusion or canine disclusion. Some periodontists felt that anterior disclusion or canine disclusion would cause occlusal overload of the anterior teeth, trauma from occlusion, and eventual hypermobility of the anterior teeth; however, prosthodontists were commonly prescribing this occlusal arrangement with good results.

Arguments ensued for at least two decades concerning the optimal eccentric occlusal scheme, but definitive research by Gibbs and Lundeen (1982) shed new light on the physiology of mastication and quelled the arguments. Gibbs and Lundeen reported three distinct adult chewing patterns. They described these as good occlusion, malocclusion, and worn occlusion.

Patients with good occlusion had an arrangement of the dentition whereby the anterior teeth prevented contact of the posterior teeth in eccentric positions. These patients chewed with smooth, repeatable strokes. During mastication, tooth gliding contacts occurred while the mandible was entering MIP. However, these contacts occurred at the very end of the closing stroke, and they were of short duration and low magnitude when compared with the forces generated in MIP. The investigators tracked the envelope of motion or border envelope (Posselt, 1952) and the envelope of function with superimposed tracings. It was clear from these tracings (Figure 5.8) that the maxillary and mandibular anterior teeth passed very close to each other during mastication, without contacting. It was the tactile sensation and tactile memory, or proprioception (Crum and Loiselle, 1972) of the teeth, as governed by the periodontal ligaments, that appeared to guide the chewing strokes for these patients with good occlusion, always returning to MIP without long gliding contacts on the anterior teeth.

A different chewing stroke was observed with patients whose anterior teeth did not prevent contact of the posterior teeth in eccentric positions. These patients lacked repeatable strokes. Chewing was erratic with long, gliding contacts. This group of patients was designated as having malocclusion.

A third type of chewing stroke was observed in patients with worn occlusal and incisal surfaces. These patients lacked overlap of the anterior teeth and chewed with broad side-to-side strokes. This group was described by the investigators as having a worn occlusion.

The results of these studies by Gibbs and Lundeen confirmed the desirability of anterior disclusion or canine disclusion for the restoration of a dentition with fixed prosthodontics (Figure 5.9.) The results also refuted the contention that a patient’s natural MIP must coincide with centric relation. In Gibbs and Lundeen’s studies, patients always returned to the MIP d/>