9. Surgical vs. Non-surgical Treatment of Periodontitis

Surgical vs. Non-surgical Treatment of Periodontitis

The goal of periodontal therapy can be defined as “to arrest the inflammatory disease process by removal of the subgingival biofilm and establish a local environment and microflora compatible with periodontal health” (Heitz-Mayfield, 2005). Biofilm can be removed and a favorable local environment can be established with non-surgical mechanical debridement and/or surgical debridement. This may be supplemented by local or systemic antibiotic or antiseptic modalities. Non-surgical and surgical therapies as well as adjunctive pharmacotherapies are described elsewhere in this volume. This chapter focuses on the issues relating to the relative effectiveness of non-surgical vs. surgical periodontal therapy.

It is generally accepted that mechanical debridement is at the core of any periodontal therapy (Van Dyke and Serhan, 2003). However, it should be noted that this view has been challenged (Mombelli, 2006), and may well change in the future as we gain a better understanding of the mechanisms underpinning the pathogenesis of periodontitis. (Van Dyke, 2007). Nevertheless, the question of whether mechanical debridement should be carried out using non-surgical or surgical techniques is obviously a very important one in clinical periodontology, and consequently has been studied and debated for decades. To date, a total of three systematic reviews/meta-analyses evaluating the relative effectiveness of non-surgical vs. surgical periodontal therapy have been published. This illustrates the importance of the clinical question and is also a reflection of the fact that a relatively large number of clinical trials have been conducted to investigate it.

Notwithstanding these limitations, the conclusions to be drawn from the available evidence are seemingly straightforward in that surgical therapy is the therapy of choice in severe disease (initial probing depths 7+ mm) or if the goal is probing depth reduction.

As stated above, the goal of periodontal therapy may be defined as “to arrest the inflammatory disease process by removal of the subgingival biofilm and establish a local environment and microflora compatible with periodontal health” (Heitz-Mayfield, 2005). While this is a sensible definition in light of our current understanding of the pathogenesis of periodontitis, it does not lend itself to the assessment of success or failure of any periodontal intervention. 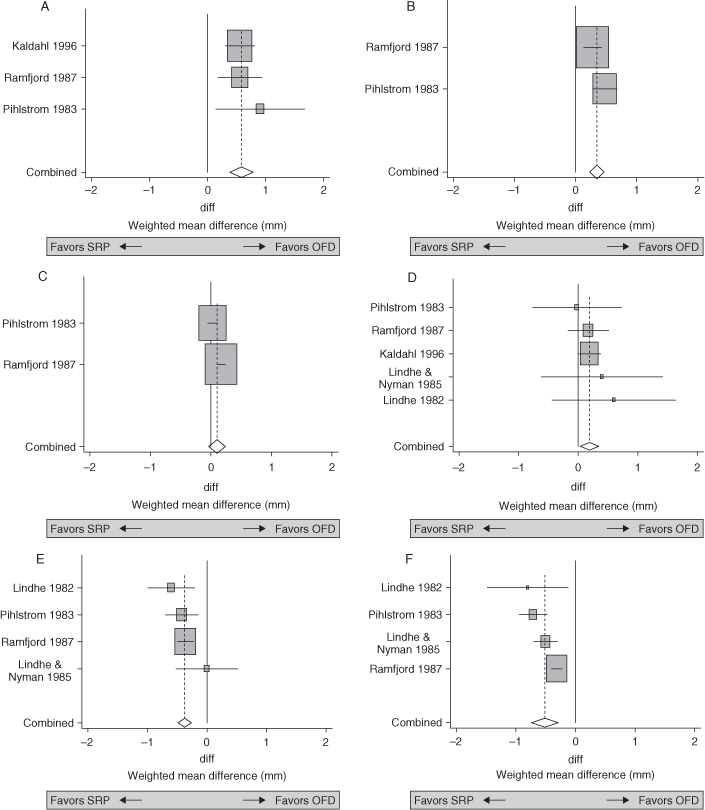 In terms of objective clinical periodontal outcomes, we may define the goals of periodontal therapy to be—at least in the short-term—the reduction or elimination of periodontal pockets and the pr/>