People who have lost all of their teeth suffer from a chronic condition. By definition, all treatment of a chronic condition is palliative, as there cannot be a restitutio ad integrum. Consequently, a patient has to live with all impacts on his or herwell-being, those stemming from both the disease and the therapy. In the case of complete edentulism, impacts of disease are the obvious disfigurement, impaired speech, and problems with biting and chewing.

Traditional prosthetic rehabilitation of edentulous patients focuses on the replacement of structure with removable prostheses. However, the “therapeutic” effect may not be complete; although improved, function still may be impaired with clinically acceptable dentures.

Traditionally, the condition of an edentulous patient has been measured in clinical terms, such as ridge height and profile or the position and quality of the mucosa.1-3 The clinical success of complete denture treatment has been measured using bite force4 and functional tests of chewing capacity and efficiency.5,6 However, correlations between clinical measures and the condition reported by the patient are often poor and nonsignificant (Table 5-1). These poor correlations between clinical factors and patient assessments emphasize that while prosthetic therapy in the past has focused on restoring lost structure, function, and esthetics, the edentulous condition affects patients on a personal level. Research only recently has shifted toward surveying edentulous patients regarding their priorities for complete denture treatment. For patients, the most important qualities of complete dentures are comfort, stability, and ability to chew with the denture. Other factors include esthetics, ability to speak, and ease of cleaning the denture.7,8

Satisfaction as an outcome measure has experienced a renaissance in the past 10 years. Satisfaction describes the patient’s valuation of a specific aspect of (denture) treatment. As with most patient outcomes, satisfaction is measured using self-administered questionnaires. Categories of measurement include general satisfaction, satisfaction with stability, comfort, esthetics, speech, chewing ability, and ease of cleaning. For scaling purposes, questions are either coupled with multi-step an-swer categories (Likert scales) or visual analog scales (VAS; Fig 5-1). 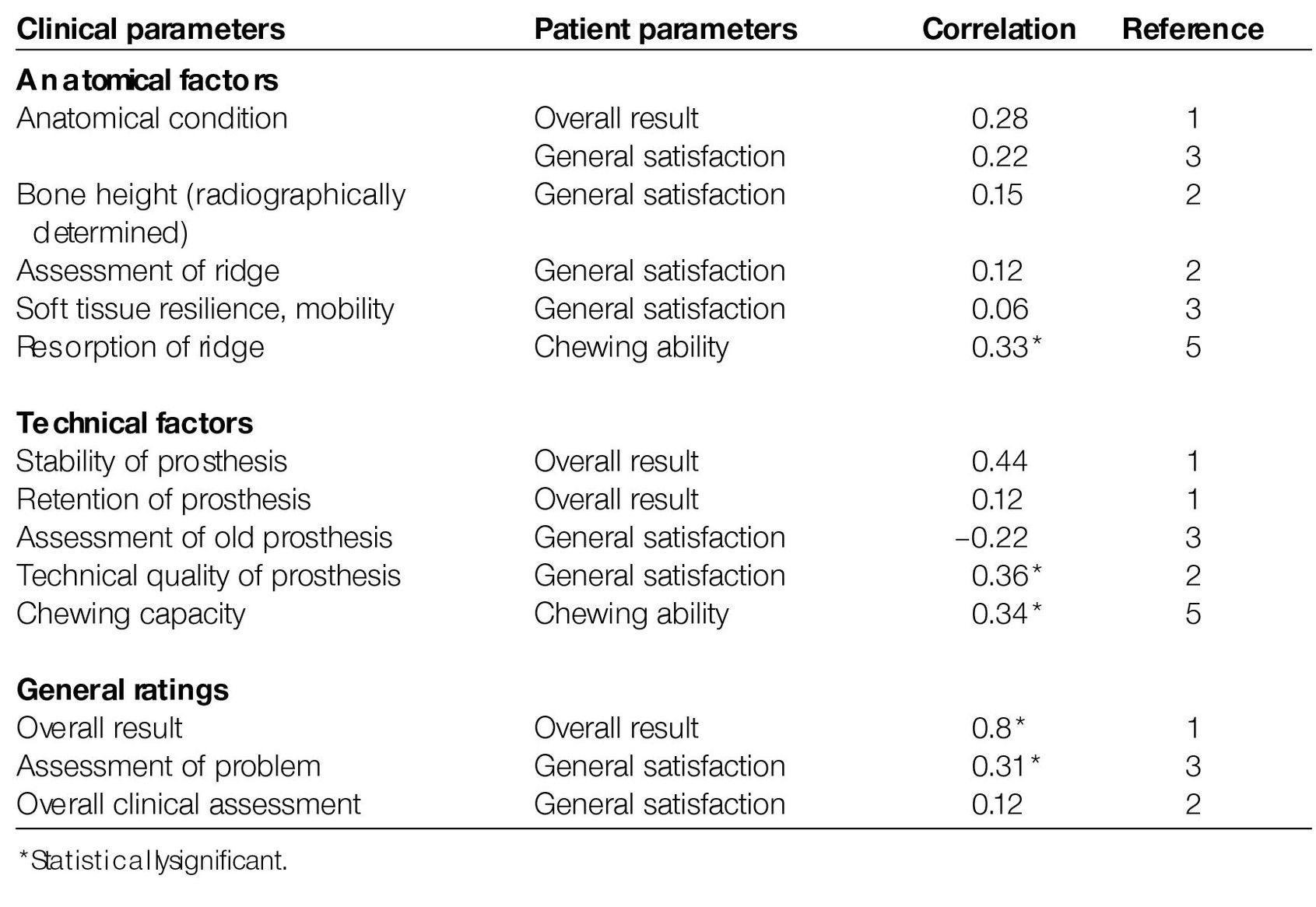 Dissatisfaction with complete denture treatment among edentulous patients has been an issue for many years. For instance, a survey of elderly patients showed 66% were dissatisfied with their complete dentures.The main reasons for dissatisfaction were discomfort, poor fit and retention, and especially soreness and pain under mandibular dentures, which can cause many more problems than maxillary dentures.3,9

It has been shown that the satisfaction with conventional dentures and implant overdentures depends on patients’ ability to chew and speak and on the appearance of the prostheses.1,10,11 Carlsson et al1 proposed that self-ratings of retention and the sense of security with the denture also contribute to patient satisfaction with complete dentures.

Several studies have compared simple mandibular overdentures supported by two implants to conventional complete dentures using a questionnaire approach. However, few studies are randomized controlled trials; only these will be reviewed here.

Fig 5-1 Example of a visual analog scale (VAS) question with the patient’s response as a vertical line across the horizontal line.