Implants have had a significant impact on current prosthodontic treatment of edentulous patients. As a result of the development of osseointegrated dental implants, new treatment options have become available and new prosthetic designs have emerged. The use of implants under standard conditions has resulted in low morbidity in various indications. Valid clinical strategies for implant technology exist to ensure the quality of prosthetic reconstruction.

Osseointegrated techniques originally where intended to restore the edentulous arch with fixed prostheses; however, the current need for overdentures is reflected in numerous studies.

Local anatomic and morphologic conditions and general patient-related factors determine the choice of prosthesis. Generally, more implants are required for support of fixed prostheses than for overdentures. Therefore, the indication for fixed prostheses may be limited due to inadequate quantity and structure of the bone. Managing advanced ridge resorption often requires additional surgical procedures such as bone augmentation or other techniques to enhance local bone quantity. This is particularly true for the maxilla; such invasive methods require more specific patient selection than is needed for simple implant-prosthodontic procedures of the edentulous mandible. Even in the case of advanced atrophy, a standard surgical and prosthodontic protocol for placement of multiple (usually two) intrafo raminal implants for overdenture support can mostly be used.

While seve ral treatment alternatives with or without implants are available for the partially edentulous patient, until recently, conventional complete dentures were the only treatment option that could be offered to the completely edentulous patient. Thus, these patients were targeted to receive implants. Edentulous arches are prevalent mostly in older adults. There is solid evidence that implants placed in elderly patients have a similar prognosis as those placed in younger patients; however advanced age is still considered by some to be a contraindication for implant placement.

A wide variety of implant systems have been developed and evaluated in clinical trials and reports, but a scientific background and well-designed studies are still often missing. Only a few implant systems and related prosthodontic treatments have been the subject of systematic investigations with proper study designs and can demonstrate scientifically and clinically reliable results. The aim of this chapter is to summarize developments of the overdenture treatment modality as compared to fixed prostheses, to discuss clinical and technical concepts, and to evaluate treatment outcomes. 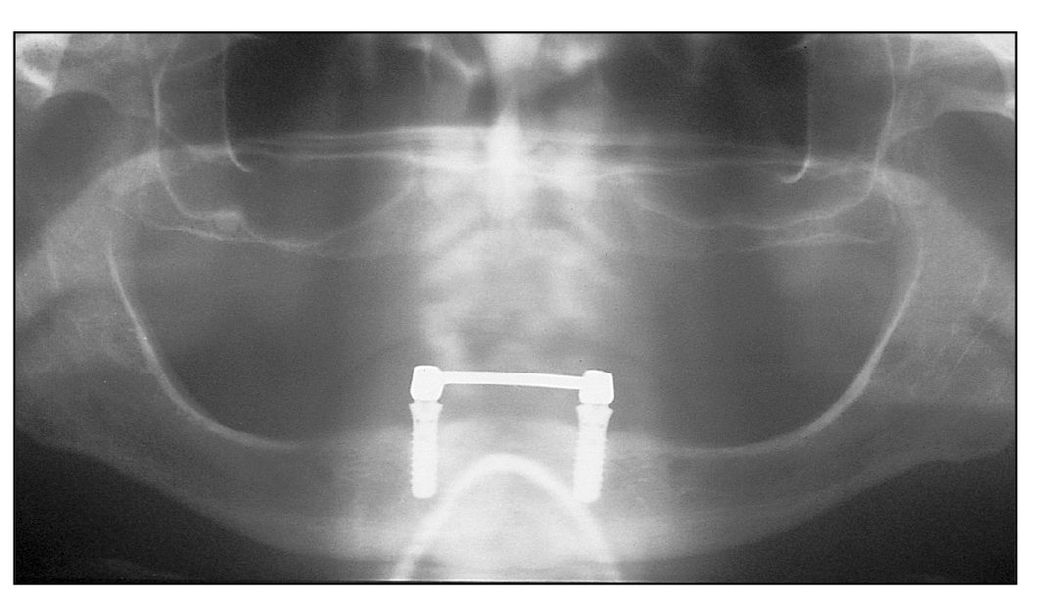 Fig 10-1a Two implants connected by a bar in a patient with osteoporosis with loose bone structure. 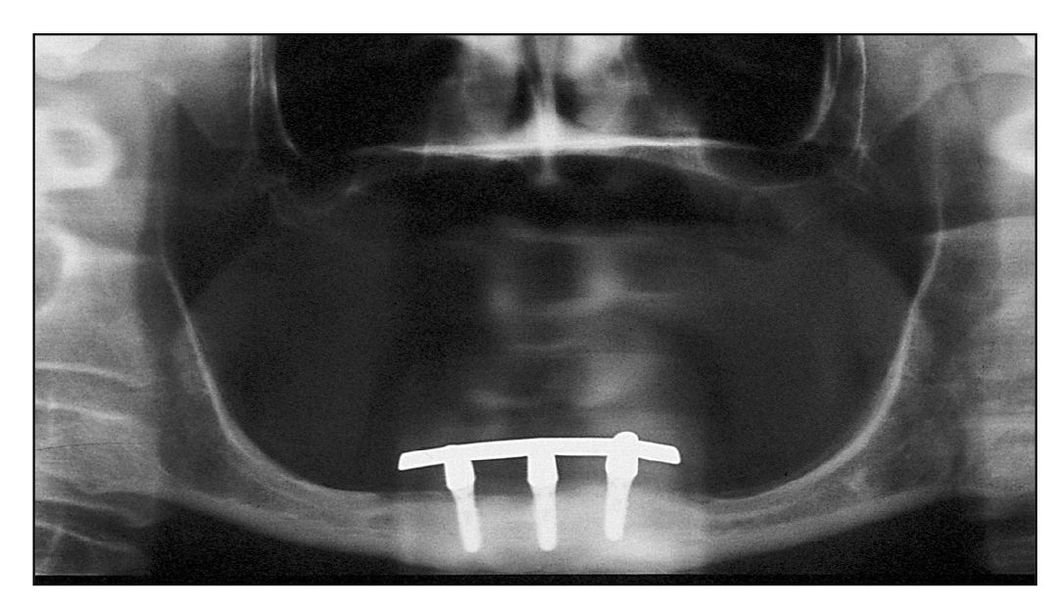 Fig 10-1b Three implants connected by a bar in a patient with advanced atrophy.The implants are 6-mm long.

Treatment with implants was originally aimed at providing the edentulous patient with fixed prostheses in the mandible and maxilla.1 In the 1980s, the use of four implants with a connecting bar supporting an overdenture became a favored treatment modality and was recommended for the edentulous mandible. However, treatment protocols were not well established and its clinical efficacy was not yet documented by well-designed studies. The workshop on overdentures conducted by the University of Leuven in 1988 demonstrated the increasing interest in mandibular overdentures as opposed to fixed prostheses. At that time, studies suggesting the use of only two intrafo raminal implants2 to support mandibular overdentures were rare. Eventually this treatment concept gained acceptance, and today there is a clear trend to place only a few implants to support a mandibular prosthesis (Figs 10-1a and 10-1b).

Fig 10-2a Residual dentition in the maxilla that cannot be maintained. 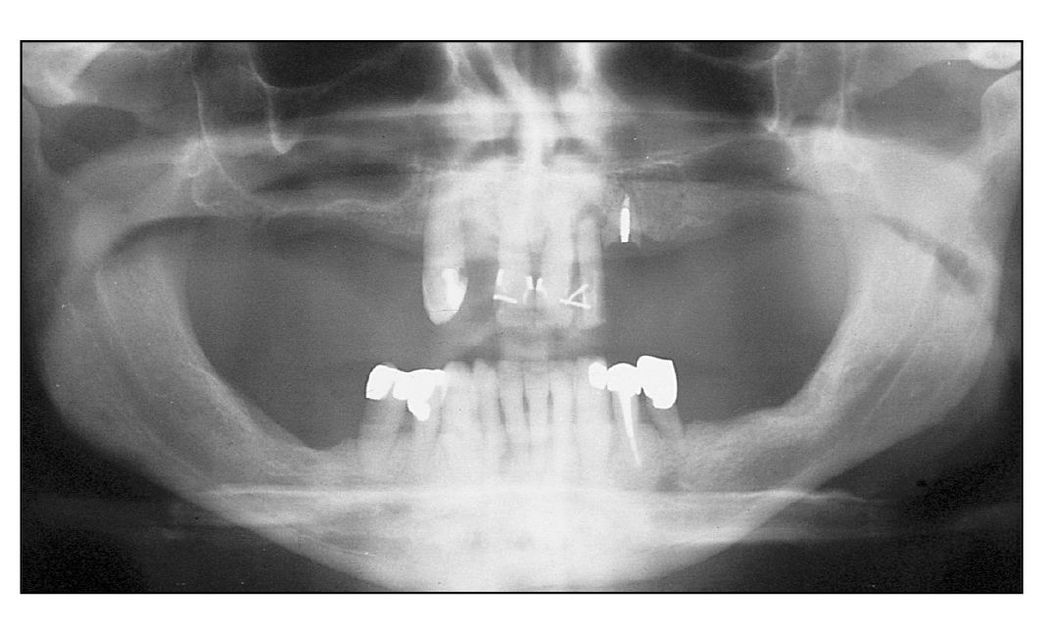 Fig 10-2b Note the large extension of the sinus. 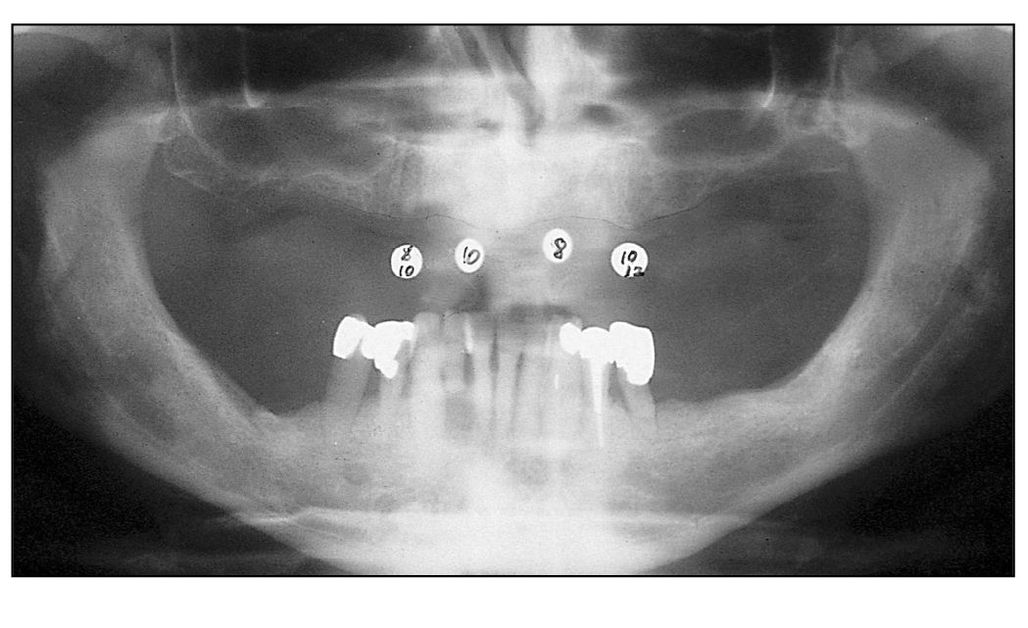 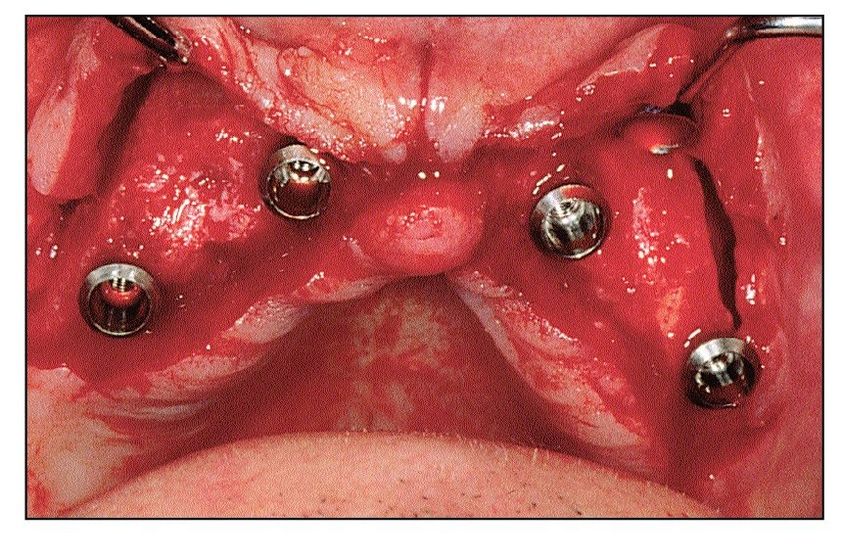 Results from a multicenter study in the late 1990s3 showed that mandibular overdentures were the most frequently used treatment modality, constituting close to 50% of all implant therapy provided, while only 3% of all implants placed were used for maxillary overdentures. Nonetheless, advantages of maxillary overdentures are many compared to fixed prostheses. Implants often can be placed in the anterior segment of the maxillary jaw between the first premolars, avoiding interference with the sinuses (Figs 10-2a to 10-2c). Congruence of the position of implants and prosthetic teeth is not necessary, facilitating management of esthetic concerns, such as tooth position, soft tissue contour, facial morphology, and facial support (Figs 10-3a to 10-3f). Comparisons between fixed and removable prostheses in the maxilla suggest the use of four implants for overdenture support and a minimum of six implants for fixed prostheses.4

Figs 10-3a and 10-3b Tooth setup in the articulator shows desired esthetic corrections.

Figs 10-3c and 10-3d Congruent position of the implants and prosthetic teeth is not necessary. 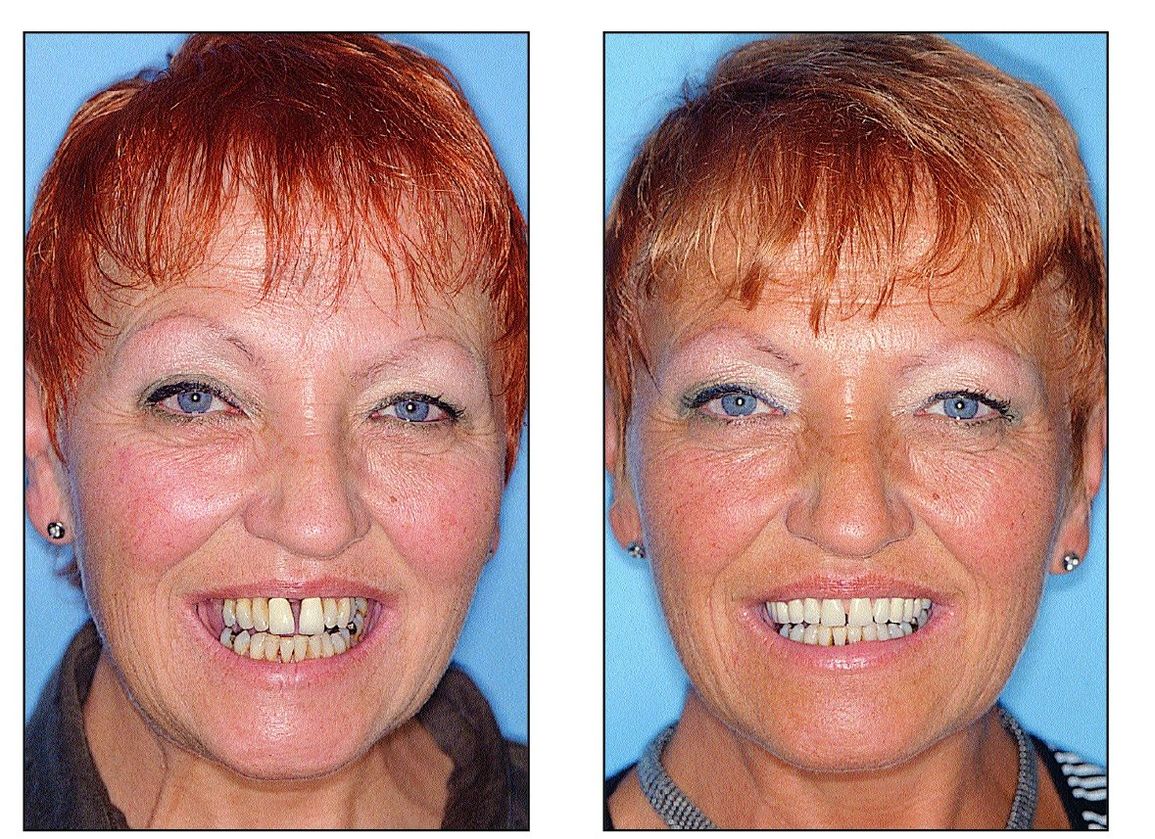 Figs 10-3e and 10-3f The patient before treatment (left) and after treatment with implant-supported overdentures (right). Her appearance and esthetics have signifcantly improved.

Sequelae of Tooth Loss and Wear of Complete Dentures

Sequelae of multiple tooth loss and edentulous arches include residual ridge resorption, orofacial collapse, impaired oral function, vulnerable tissues, and psychosocial impact. Pronounced loss of the residual ridge seen in the first year after tooth extraction becomes more moderate during the following years, but may vary from patient to patient. In many edentulous patients, esthetic appearance and function may be restored sufficiently with complete dentures, but stability and retention of complete dentures can be poor, particularly in the mandible. Tooth loss may have a noticeable psychosocial impact on the patient as well. Thus, the fixation of prostheses with implants has a great impact on prosthetic privacy, function, confidence in social activities (such as eating, speaking, laughing, and sports), and ove rall self-esteem.

A study5 of edentulous patients’ satisfaction and complaints about the impaired function of their mandibular complete dentures established a correlation between denture satisfaction and degree of atrophy. The number of complaints increased signifcantly with patients who had lost more than 50% of their estimated original ridge height. In a randomized clinical trial,6 90 edentulous patients were assigned to three different treatment modalities: (I) new complete dentures only; (2) new complete dentures with a mandibular vestibuloplasty; and (3) new dentures with implant support. Patients were followed for 5 years to assess various functional improvements. Altogether, no obvious differences were found between the two groups with conventional dentures, but the group with implant-supported overdentures demonstrated significant functional improvement and expressed highertreat-ment satisfaction.

Overdentures supported by two intraforaminal implants is a well-established treatment modality and its effectiveness is demonstrated in many reports2,7 The following principles have been established for treatment with overdentures:

Such treatment criteria sparked debate on the local, systemic, and behavioral aspects of aging and the risks of osseointegration in poor-quality bone encountered in older patients. Various systemic factors were considered to be contraindications as related to the surgical procedures or to the process and maintenance of osseointegration itself. Bone quality and quantity were often regarded to be insufficient in elderly patients. Furthermore, it was assumed that patient compliance, maintenance of good oral hygiene, and participation in the recall program would not be consistent. However, placement of implants may make patients more aware of oral problems and motivate them to care for their oral health (Figs 10-4a and 1 0-4b).Therefore, an individual risk assessment for each patient is more important than establishment of strict exclusion criteria.

Figs 10-4a and 10-4b This patient was motivated to perfo rm good oral hygiene after receiving implants. (left) Residual mandibular dentition and old maxillary complete denture prior to treatment. (right) Hygiene improved after placement of two implants connected with a bar

Systemic osteoporosis is often considered to negatively impact osseointegration in elderly patients, but numerous studies point to the contrary. Bone conditions have been found to vary within individuals,8 and this may also be true for the arch that exhibits site-specific characteristics. Comparative evaluation of jaw/>