The quality of life of elderly edentulous patients can be improved using mandibular interforaminal implants to overcome the edentulous predicament.1 There is consensus that pairs of splinted or unsplinted implants in the anterior mandible, regardless of the implant system used, are clinically successful, economically advantageous, and structurally sufficient to support an overdenture.2-5 It has also become acceptable to place implants in one stage using the nonsubmerged approach,6,7 or by modification of the original two-stage submerged procedure.8-10 As a result, implant placement protocols now require fewer costly surgical procedures.

At one time, it was recommended that a 12-week healing period be allowed prior to loading of implants. Now it is generally accepted that premature functional loading11 of splinted or unsplinted mandibular implants with overdentures can occur before completion of the conventional 12-week healing period. There are three approaches to premature loading. Early loading descrbes placement of a prosthesis before 12 weeks, usually after I week, but within a period of 20 to 28 days after implant placement.8 Progressive loading describes the gradual increase in force on a dental implant whether applied intentionally with a prosthesis or unintentionally via forces placed by adjacent anatomic structures or parafunc-tional loading.12 With immediate loading, full occlusal and incisal loading is placed on a dental implant with the prosthesis the same day assurgery or within the first few days after surgery.12

Critical determinants of any premature functional loading strategy are related to primary implant stability and an absence of micromotion at surgery, bone type, implant length, and implant surface.11 Implant success with these approaches is achieved with a functional prosthesis in an absence of discomfort, altered sensation, or infection; evidence of minimal marginal bone loss; and implant stability.13

Early loading of implants with either the original smooth (turned) surfaces or, more recently, different roughened surfaces is a paradigm shift welcomed by clinicians.14,15 With early loading, the original 12-week healing period prior to loading can be systematically shortened11 to expedite an earlier improvement in masticatory function and quality of life for elderly edentulous patients.16

One hundred and six edentulous patients (mean age 65.3 years, SD 7.4) with a history of diffculties with their complete dentures and between 8 and 15 mm of residual anterior mandibular bone were selected using standard inclusion and exclusion criteria.17 Overall, 38% of the patients were men, although there were higher numbers of men in the Southern 6-week group (58.3%), ITI 6-week group (66.7%), and ITI 2-week group (50%). Patients had been edentulous for a mean period of 34.7 years (SD 13.4), and most had worn more than three sets of replacement complete dentures. Groups did not differ significantly by age, number of years of edentulousness, or number of previous dentures. On average, each set of complete dentures had been worn for 11.2 years (SD 6.8), and implant length ranged from 8.5 to 18 mm. The majority of patients had either type II or III bone quantity, with type C or D bone quality. The groups were similar in implant length, bone quality, and quantity.

Using a table of random numbers, patients were randomly allocated18 to be treated using one of four different implant systems. One of these systems used implants with a machined smooth titanium implant surface (Brånemark). The other three systems offered implants with roughened titanium surfaces to varying extents (Steri-Oss, ITI, and Southern Implants). An attempt was made for each implant system to have a control group (12 weeks healing) and two test groups (6 and 2 weeks healing). Twelve patients were allocated to each group, except for the 2-week Brånemark group, to which only 10 patients were assigned. Treatment planning included preoperative diagnostic panoramic radiographs (Scanora, Soridex, Orion, Helsinki, Finland), conventional lateral cephalometric radiographs, and new maxillary and mandibular complete dentures. 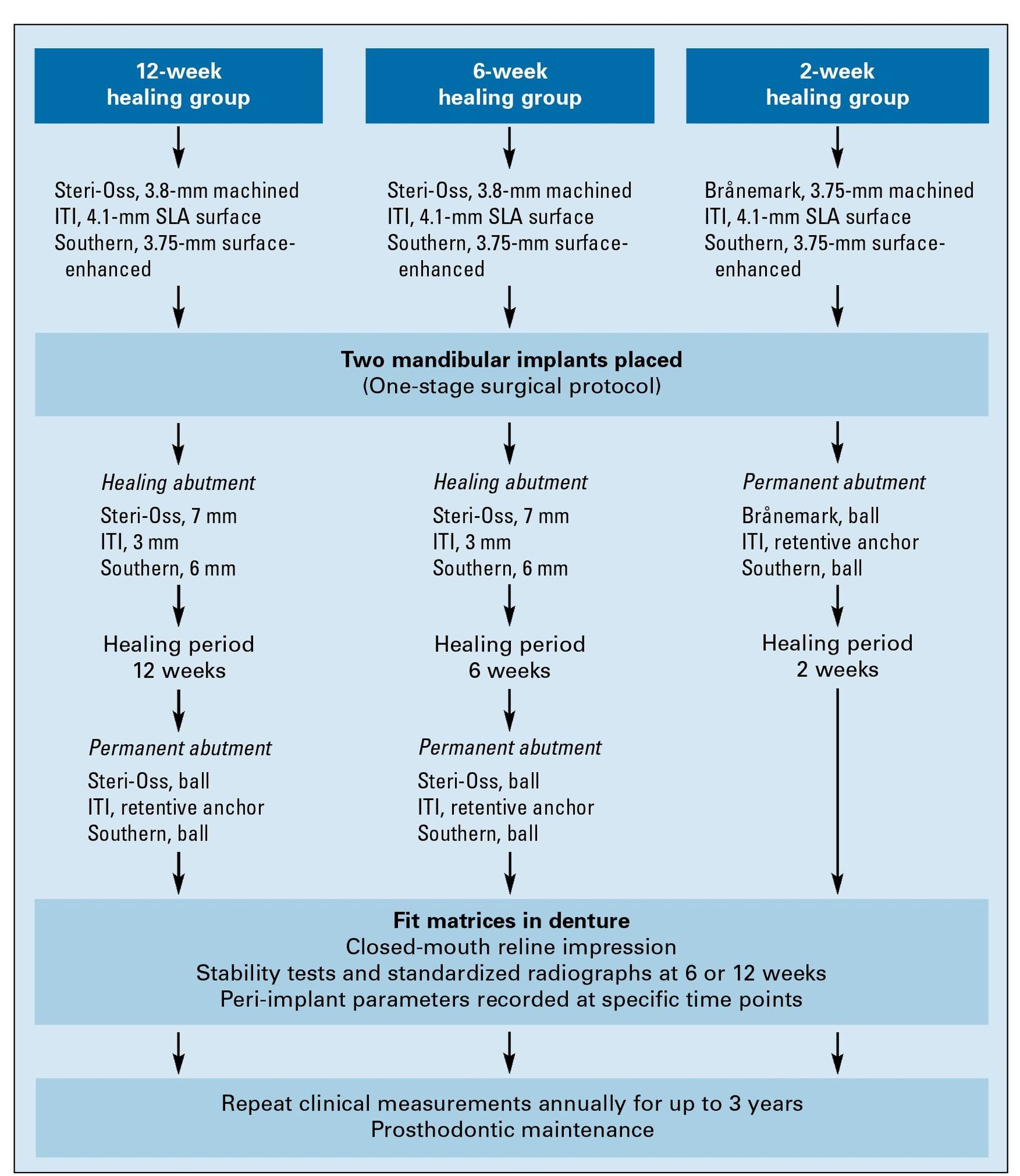 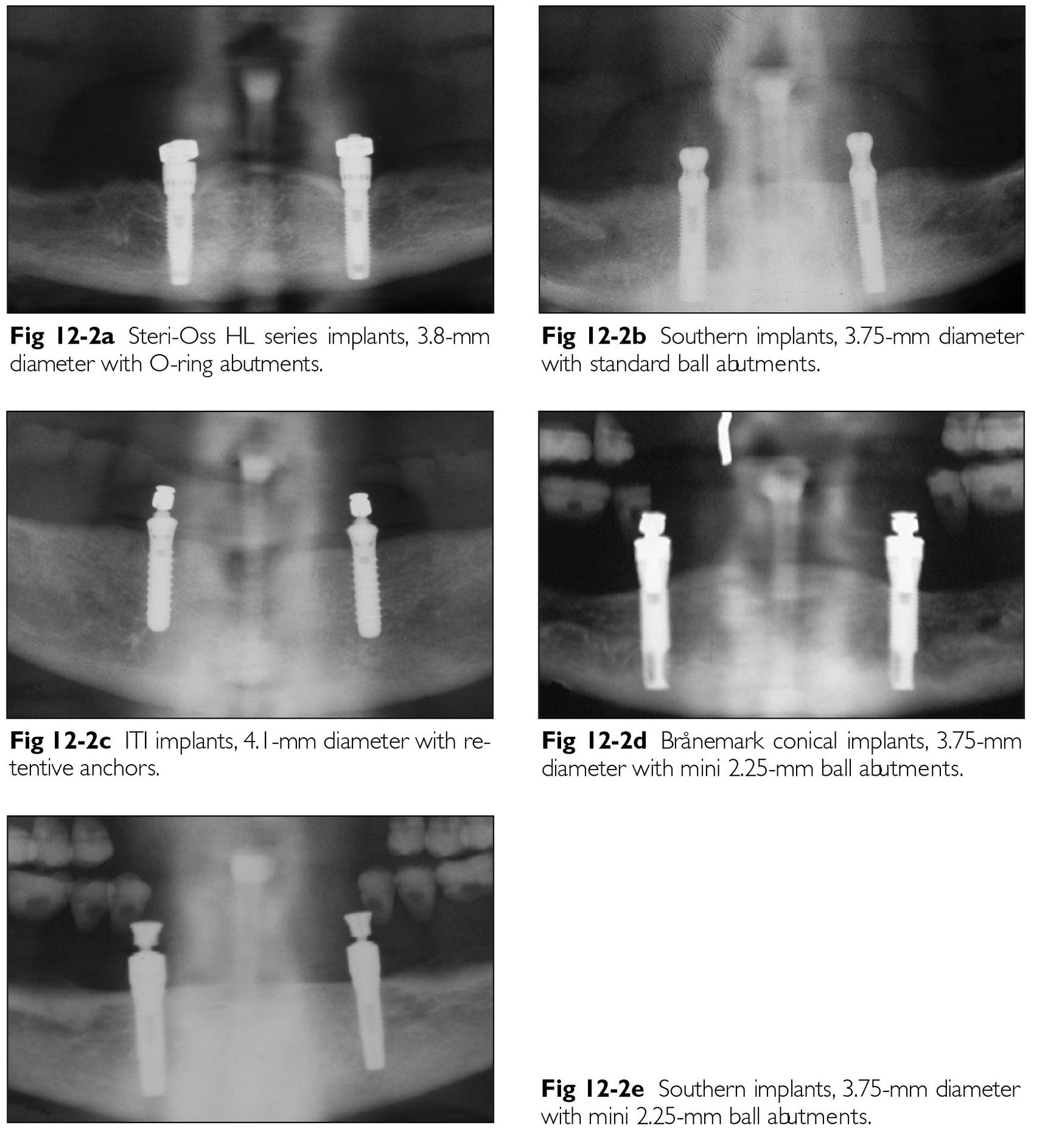 Patients in the 12-week and 6-week groups did not wear their mandibular denture for 10 days, after which time tissue conditioner was applied to its undersurface to minimize loading forces (Figs 12-3a and 12-3b). Patients in the 2-week healing groups were permitted to use their mandibular dentures immediately postoperatively (Figs 12-3c and 12-3d), with a soft diet for the first 2 weeks, and they were given strict instructions to remove the prosthesis at night.The postoperative care protocol included daily 0.2% chlorhexidine rinses and peri-implant application of chlorhexidine gel (Perioguard, Colgate Oral Care, Sydney, Australia), using the denture as a reservoir.After specific healing periods, each mandibular denture was relined to include respective matrices (Fig 12-4).

Implant stability tests using either the Periotest device (Siemens AG, Bensheim, Germany) or the Osstell device (Integration Diagnostics, Göteborg, Sweden) were performed at baseline and specified annual intervals postinsertion. Standardized intraoral radiographs of the coronal parts of the implants were taken with a modified technique22 and marginal bone changes were measured by two calibrated examiners using 7x magnification (Fig 12-5). For all 6- and 12-week healing groups, the periimplant parameters using periodontal techniques were measured 4 weeks after patri × placement, at 10 and 16 weeks, respectively. For all 2-week healing groups, the peri-implant parameters were taken at 6 weeks to first allow for mucosal maturation.The shoulder of each implant (ITI and Brånemark), the top of the abutment cylinder (Steri-Oss), or the top of the ball abutment (Southern) were used as the reference points. Standardized oral hygiene instructions with end-tufted toothbrushes or powered brushes24 were provided after abutment connection and were reinforced at recall appointments; professional cleaning also was perfo rmed at recall appointments. Patients were followed for up to 3 years after implant placement for evaluation of implant success rates.13 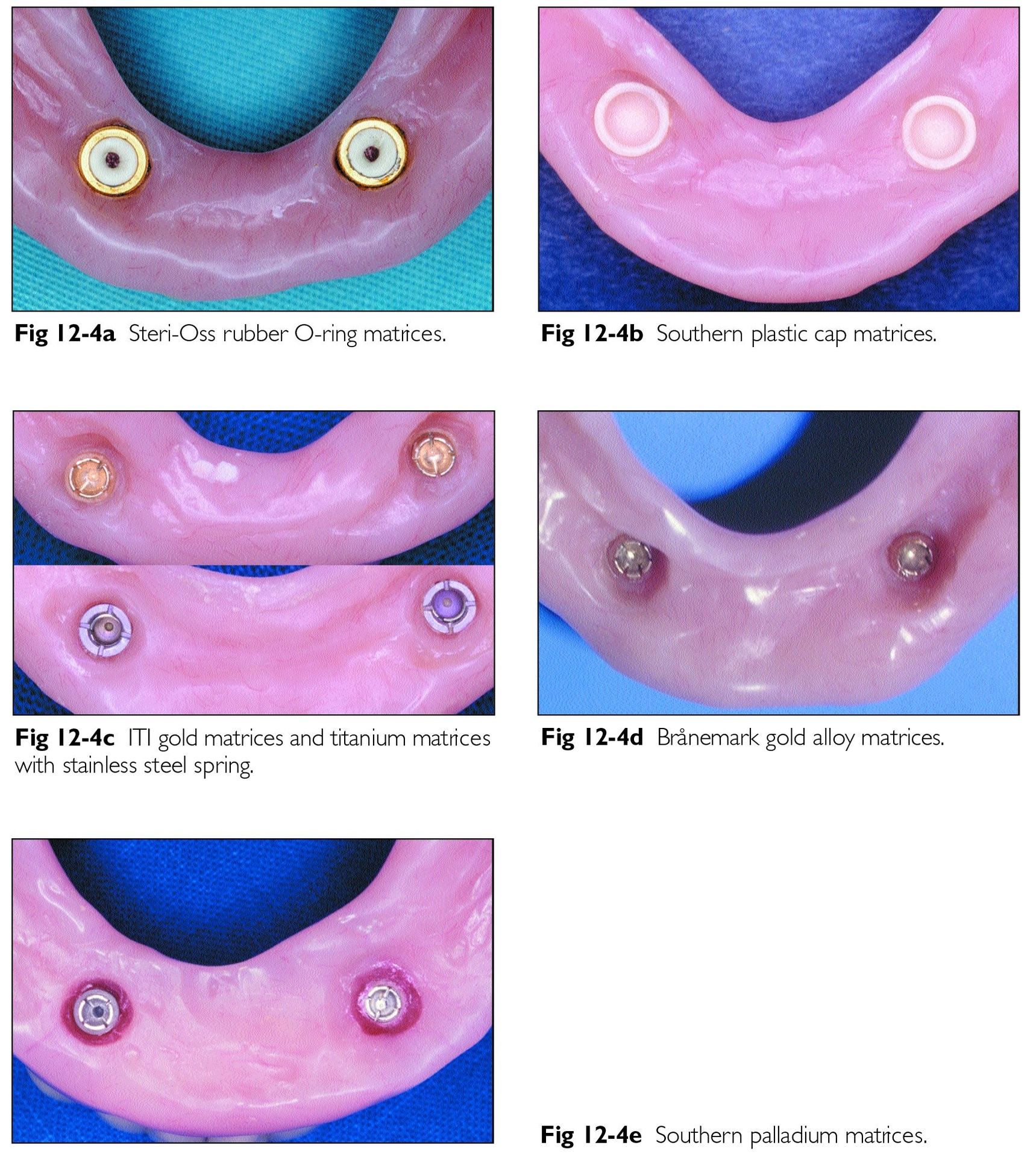