This chapter focuses on central trigeminal (V) pathways and mechanisms that underlie nociceptive transmission. It describes the afferent inputs and organization of the brain stem elements, then outlines how nociceptive information is transmitted or modulated and relayed to other brain centers, and concludes with an outline of processes at some higher levels of the central nervous system (CNS).

Most V primary afferents that innervate cutaneous, intraoral, deep tissues (eg, joints, muscle, cranial vessels) have their cell bodies in the V ganglion and project to the V brain stem sensory nuclear complex (VBSNC). Most axons travel in the V spinal tract and give off collaterals that activate secondorder neurons within or adjacent to the VBSNC. The VBSNC can be subdivided into two major components: the main or principal sensory nucleus and the spinal tract nucleus, which contains three subnuclei: oralis (Vo), interpolaris (Vi), and caudalis (Vc) (Fig 5-1). The Vc is a laminated structure resembling the spinal cord dorsal horn; it extends into and merges with the cervical spinal cord.1–6 It also receives afferent inputs from other cranial nerves and cervical nerves, as well as from other brain stem or higher CNS centers that provide part of the substrate for modulation of V neurons (see chapter 8). 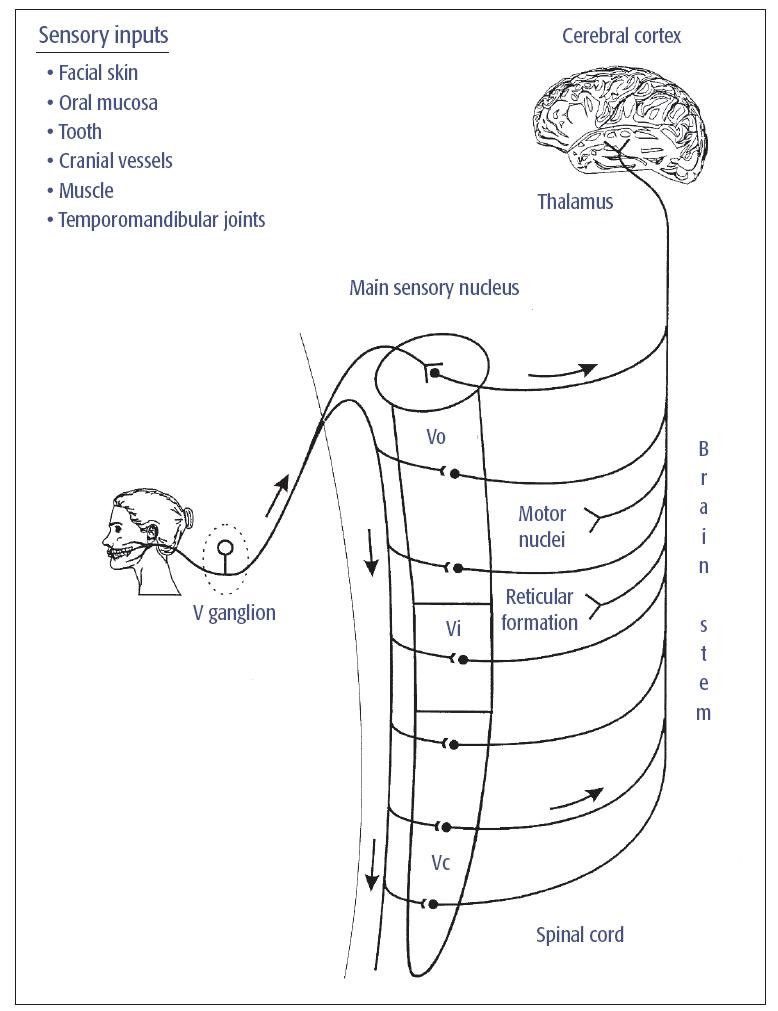 Fig 5-1 Major somatosensory pathway from the mouth and face. Trigeminal (V) primary afferents have their cell bodies in the V ganglion and project to second-order neurons in the VBSNC. These neurons may project to neurons in higher levels of the brain (eg, in the thalamus) or in brain stem regions such as the cranial nerve motor nuclei or the reticular formation. Not shown are the projections of some cervical nerve and cranial nerve VII, IX, X, and XII afferents to the VBSNC and the projection of many V, VII, IX, and X afferents to the solitary tract nucleus. Reprinted with permission from Sessle.1

The neurons in the VBSNC are somatotopically arranged (an exception is the Vi/Vc transition zone). Most dorsal neurons in each component have inputs from the mandibular branch of the V nerve as well as receptive fields (RFs) within its territory (an RF is that portion of the body which, when stimulated at threshold, excites the neuron). The ventral neurons have an ophthalmic RF; neurons having a maxillary RF occur between the dorsal and ventral parts of each component. However, in Vc the pattern of representation of the face and mouth may shift such that RFs in the perioral region are found in the rostral part of the subnucleus and RFs in the more lateral regions of the face are located more caudally; this particular somatotopic pattern in Vc has sometimes been referred to as an “onion-skin” arrangement.1,2,3,6

Most evidence indicates that Vc is the principal first relay site of V nociceptive information. By virtue of its close functional and structural similarity to the spinal dorsal horn, which is the essential region of the spinal cord for pain, Vc is now often termed the medullary dorsal horn. The small-diameter (A-δ and C-fiber) afferents carrying nociceptive information (see chapter 4) predominantly terminate in laminae I, II, V, and VI of Vc; in contrast, the large A-fibers conducting low-threshold mechanosensitive (tactile) information terminate primarily in the more rostral components of the VBSNC and in laminae III to VI of Vc. Transection of the V spinal tract (V tractotomy) at the level of Vc produces a marked reduction in pain perception, especially in the face, and has been used to relieve the excruciating pain of V neuralgia (see chapter 24).1,3 Similar lesions in animals reduce behavioral, muscle, and autonomic responses to facial noxious stimuli.1

Additional evidence of a crucial role for Vc in craniofacial pain comes from microelectrode recordings of the activity of its neurons. These show that many Vc neurons are activated by cutaneous nociceptive inputs. The neurons have been categorized as either nociceptive-specific (NS) or wide dynamic range (WDR) (Fig 5-2) and are predominantly located in the superficial (I/II) and deep (V/VI) laminae of Vc. NS neurons respond only to noxious stimuli (eg, pinch, heat) applied to a small RF and receive inputs from A-δ and/or C-fiber nociceptors, whereas WDR neurons also receive A-fiber inputs that transmit non-noxious (eg, tactile) information. WDR neurons have a large RF with low-threshold and high-threshold areas. Both NS and WDR neurons increase their firing frequency as the intensity of noxious stimulation is increased or as more of the RF is stimulated. These RF and response properties of Vc nociceptive neurons determine our ability to localize, detect, and discriminate cutaneous noxious stimuli,1,3,8,9 although some neurons may receive other convergent afferent inputs and are involved in deep pain. In addition, all nuclei and subnuclei of the VBSNC contain low-threshold mechanoreceptive (LTM) neurons that are responsive to light tactile stimulation of a localized RF in the facial skin or mouth, but not noxious stimuli, and provide the brain stem substrate for the localization, detection, and discrimination of touch. Some VBSNC neurons respond to non-noxious mechanical stimulation of deep tissues. 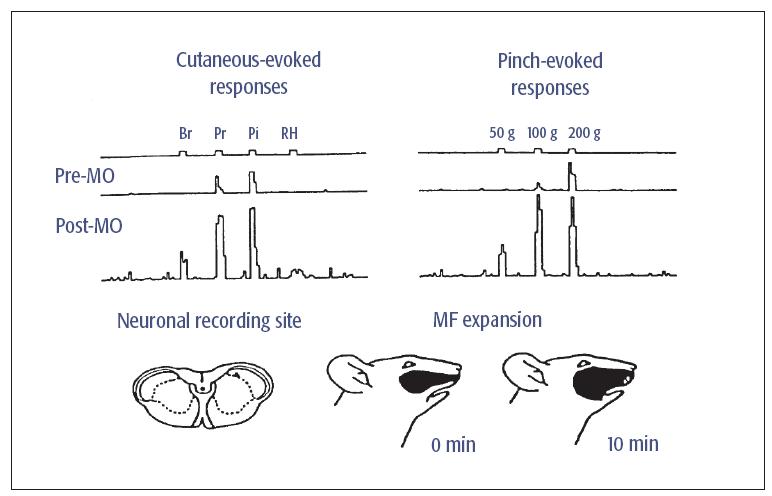 Further evidence indicates that, like the spinal dorsal horn, the central endings of nociceptive primary afferents transmit the nociceptive signals to the second-order V NS and WDR neurons by releasing excitatory amino acids (eg, glutamate) and neuropeptides (eg, substance P, calcitonin generelated peptide [CGRP])1,10,11 (Fig 5-3). Glutamate activates the nociceptive neurons via metabotropic glutamate receptors and two ionotropic receptors: N-methyl-D-aspartate (NMDA) and non-NMDA receptors (eg, α-amino-3-hydroxy-5-methyl-4-isoxazole-propionic acid [AMPA]) (see Fig 5-3). Activation of the AMPA receptor is rapid and shortlived, whereas the NMDA receptor has a longer period of activation; this is one reason the NMDA receptor is thought to be important in the processes called wind-up and central sensitization. Among the neuropeptides involved in nociceptive transmission, the neurokinin substance P is particularly important. It is concentrated in afferent endings in the superficial and deep Vc laminae, where the nociceptive neurons predominate. Furthermore, noxious craniofacial stimulation causes release of substance P within Vc, where it acts through neurokinin receptors to produce sustained excitation of the nociceptive neurons (see Fig 5-3).