Patients with periodontitis frequently present with one or more systemic conditions that increase their risk of developing periodontitis and which must be considered when planning treatment (Fig 4-1). This chapter aims to provide practical guidance for practitioners in managing the most important and frequently occurring risk factors for periodontitis as part of comprehensive treatment planning. 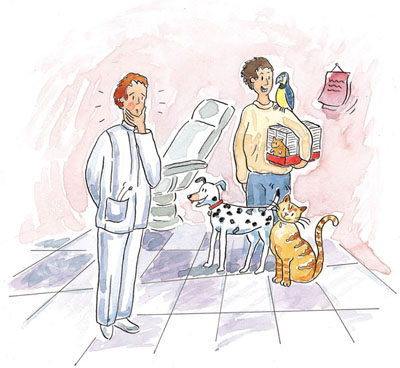 Fig 4-1 “I’m sorry, but genetic testing for gum disease is only done in humans.”

After reading this chapter, the reader should:

The first step in managing risk factors is to identify precisely which risk factors the patient presents with. This information becomes apparent during history-taking and examination. A full medical history must be recorded, including details of ongoing medical treatment, current medications, and whether the patient suffers from any medical condition that might affect the periodontal diagnosis or therapy. History-taking has been covered in detail in Understanding Periodontal Diseases: Assessment and Diagnostic Procedure in Practice. From the perspective of risk factor management in periodontics, perhaps the most important considerations are:

These will be discussed below, together with other systemic risk factors for periodontal disease. Management of risk factors should form an integral part of the treatment of patients with periodontitis as part of a comprehensive therapeutic strategy.

A large body of evidence now supports the theory that genetic factors play an important role in determining susceptibility to periodontitis. We now realise that the host response has a key role in disease pathogenesis and that components of the host response are under genetic control. Both underactivity (hypo-responsiveness) and over-activity (hyper-responsiveness) of components of the host response to the presence of subgingival plaque can place individuals at increased risk of periodontitis. For example, hypo-responsive polymorphonuclear leukocytes (PMNL) are associated with increased risk for periodontal disease in the inherited condition, Papillon-Lefèvre syndrome (PLS). At the other end of the spectrum, hyper-responsive defence cells (either constitutively or functionally hyper-responsive) may cause excessive tissue damage. Such cells (e.g. PMNLs, macrophages) migrate into the periodontal tissues and secrete excessive levels of destructive enzymes and mediators as part of the inflammatory host response against plaque bacteria, resulting in breakdown of surrounding periodontal hard and soft tissues, in a manner referred to as “collateral damage”.

While research has identified an important role for genetic factors in periodontitis, and we may be able to postulate that individuals with rare syndromes such as PLS possess defective PMNLs, in the majority of patients who present clinically with periodontitis we are not yet able to make meaningful statements about their genotype (their “genetic make-up”). Furthermore, we are not in a position to be able to alter a genetic profile so as to reduce the risk of periodontitis. It is, however, important to ask about other family members when examining a patient with periodontitis, particularly young patients with aggressive forms of the disease.

Aggressive periodontitis tends to occur in families, suggesting a genetic basis to the disease. The precise nature of any immune defect that is inherited in families may not be apparent. There may be a defect in PMNL function, for example, that predisposes the patient to periodontitis, but does not manifest as any other clinical sign or symptom, and the patient appears to be medically healthy (other than a diagnosis of periodontitis). A detailed family history, including questions about whether brothers or sisters have periodontal problems, or whether the patient’s parents lost their teeth early, are also an important part of the information gathered from patients with all forms of periodontitis. Such data help to inform the diagnosis and provide a “window” on the potential “natural history” of that patient’s disease, i.e. how their genetic make-up may be expressed clinically (their “phenotype”).

A commercial test for genetic status in periodontitis patients has been developed. This is the Periodontal Susceptibility Test (PST), which is performed on a finger-prick blood sample. This tests for what has been called the Periodontitis-Associated Genotype (PAG), the presence of specific polymorphisms in the gene that codes for interleukin-1 (IL-1). A polymorphism is not a mutation in the gene, and polymorphisms exist throughout the human genome. In the case of the PST, single nucleotide polymorphisms (SNPs) are identified, in which there is a single change in the base pair sequence in the DNA molecule at specific points in the gene. Research has suggested that individuals who possess these specific polymorphisms (i.e. are PAG-positive) produce more IL-1 for a given bacterial challenge, and in view of the importance of IL-1 in periodontal pathogenesis, they are therefore more likely to have periodontal disease. Indeed, some studies have suggested that PAG-positive patients who smoke are up to seven times more likely to have severe periodontitis compared to PAG-negative smokers, although other studies have failed to identify such an association.

This raises the question, if a patient is PAG-positive, should they be managed any differently from those who are PAG-negative, either before periodontal disease has developed, during periodontal treatment, or during the supportive phase of periodontal therapy? At the present time, there is simply not enough evidence that patients should be managed any differently on the basis of available genetic tests such as the PST. For example, the association between PAG and periodontitis was only seen in smokers. When non-smokers were included in the analysis, no association was apparent. Furthermore, associations between particular genes and periodontal disease have only been demonstrated in certain populations (typically, white Caucasians), and not in other racial or ethnic groups. It is clear, therefore, that genetic tests based upon specific genes may not apply to all patients. Importantly, studies in the UK and Europe indicate that a test such as PST is of little benefit for these populations, but the future holds exciting possibilities for risk factor identification, early diagnosis, and improved management strategies that have a strong scientific basis. Finally, the associations between genes and disease may be indirect, i.e. the presence of a certain genotype does not directly impact on the disease. Instead, there may be interactions between genetic factors and other risk factors (such as smoking) and, therefore, the genotype may only be relevant if other risk factors are also present.

What do genetic test results mean, and what is their impact on the patient?

In all the studies that have evaluated PAG and periodontal disease, there have been substantial numbers of patients who were PAG-positive who did not have periodontal disease and, conversely, large numbers of patients who were PAG-negative who did have periodontal disease. Clearly, PAG status (as identified by the PST) does not directly impact on periodontal status in all patients. Patient considerations must also be taken into account when performing any genetic test, and patients must be counselled before undergoing such a test. Genetic testing could theoretically have negative effects on individual patients. For example, a PAG-positive patient might think that they will inevitably develop periodontal disease no matter what they do, and they may therefore fail to comply with periodontal preventive strategies or oral hygiene programmes. Conversely, PAG-negative patients might believe that this makes them safe from periodontal disease, and they may also fail to comply with plaque control requirements. However, just as periodontal disease is polymicrobial in nature (not caused by a single pathogen), it is also poly-immune/inflammatory in aetiology. It is therefore likely that it is polygenic rather than monogenic in nature and therefore a single gene polymorphism, like those tested with the PST, is unlikely to explain the disease risk in most patients.

In summary, caution must be employed when interpreting the findings of genetic susceptibility tests for periodontitis. However, research will continue, and associations between genetic status and the presence of other risk factors such as smoking may become apparent. Currently, there is no evidence to suggest that patients should be treated any differently on the basis of genetic testing.

Phenytoin (anticonvulsant), the calcium channel blockers (e.g. nifedipine, amlodipine) and ciclosporin (an immunosuppressant) are associated with gingival overgrowth (Fig 4-2). The precise mechanism for the overgrowth is not clear, but involves interactions between inflammatory cells in the gingival and periodontal tissues, the drug, and susceptible sub-population/>