1: The Goals and Clinical Outcomes of Non-Surgical Treatment

The Goals and Clinical Outcomes of Non-Surgical Treatment

This chapter aims to outline the goals of non-surgical periodontal treatment and to provide an overview of the clinical outcomes that are expected following treatment.

After reading this chapter the practitioner should have an understanding of:

The Periodontal Pocket – A Pathological Environment

A periodontal pocket is a pathologically deepened gingival crevice. The lateral and apical boundaries of the pocket are the ulcerated epithelial lining of the pocket wall and the junctional epithelium respectively. The remaining “wall” of the defect comprises the diseased root surface – the “target” for periodontal treatment.

The diseased root surface is contaminated with subgingival calculus deposits and a layer of dental plaque, which contains the periodontal pathogens that constantly challenge and compromise the host’s defence mechanisms. Dental plaque is now regarded as a biofilm, which essentially is an organised community of bacteria that forms on a non-shedding surface such as a tooth. Bacteria attach to the tooth and produce a matrix of extracellular polymers to help bind them together. Microcolonies form and new species join the biofilm which then contains diverse species and metabolic states. Gingival crevicular fluid (GCF) flows through the many channels in the aggregation to provide nutrients and to remove some of the waste products. The biofilm is viable and bacteria can proliferate to establish new colonies on other parts of the root surface.

The majority of bacteria in an established biofilm are recognised, anaerobic organisms with cell walls containing powerful lipopolysaccharide (LPS) based endotoxins. Studies have shown that the vast majority of LPS is only loosely bound to, or associated with, the root surfaces although a small percentage of the total LPS may cause subsurface contamination, in particular at sites of root surface irregularities, root grooves or resorption lacunae. Subgingival calculus on the root surface may also be contaminated with LPS. Diagrammatic representations of a diseased root surface are shown in Fig 1-1. 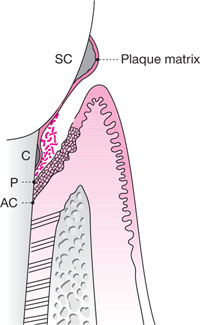 Fig 1-1 Diagrammatic representation of a periodontal pocket for a patient with chronic periodontitis. The pocket epithelium, which is ulcerated, has migrated down on to the root surface. Calculus deposits are present both supra- and subgingivally and these deposits are covered with a layer of plaque. The subgingival plaque may also be regarded as a biofilm with a complex population of loosely adherent microoganisms on its surface.
SC, supragingival calculus
C, subgingival calculus
P, the most apical extent of the periodontal pocket
AC, the most apical cell of the junctional epithelium

The Aims of Non-Surgical Treatment

The overall aim of non-surgical treatment is to create an environment that is biologically compatible with healing of the periodontal tissues. This is most likely to be achieved by:

Laboratory studies have shown that a gentle stream of water can remove about 39% of the LPS whilst brushing the root surface eliminates a further 60%. This suggests that the hygiene phase of non-surgical treatment may be instrumental in disrupting the biofilm and eliminating up to 99% of endotoxins in the pocket. Such a hypothesis of course makes the assumption that the patient is able to access the entire depth of the pocket during cleaning. This is seldom achieved for pockets that are greater than 5mm in depth. Indeed, the deeper the pocket, the more residual, undisturbed biofilm is likely to remain. 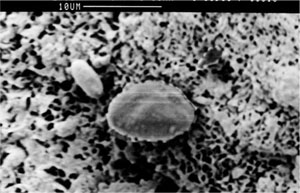 Calculus is not the cause of periodontal disease, but may be regarded as a contributory factor, for several reasons including:

For these reasons, it is important to try to remove as much of the calculus as possible, although some residual, isolated deposits of subgingival calculus are likely to be compatible with periodontal healing. This observation is consistent with studies that have shown that even under optimal conditions of access during periodontal surgery absolutely calculus-free root surfaces following root surface instrumentation are hardly ever achieved. With the understanding that pockets with probing depths of >5mm are exceptionally difficult to render plaque and calculus free, it is almost certain that residual deposits are more likely to be the rule rather than the exception with a non-surgical approach.

The Concept of Full-Mouth Disinfection

The importance of eliminating the biofilm and bacteria that have freedom of movement around the oral cavity, and are the cause of periodontal infections and re-infections, has been recognised by the introduction of full-mouth disinfection as a novel treatment strategy for periodontal diseases. Full-mouth disinfection involves the conventional removal of root surface deposits, usually over two visits within 24 hours of one another. Instruction in oral hygiene procedures is also given at one or both visits. This treatment recognises, however, that many of the potent pathogens, such as Porphyromonas gingivalis and Actinobacillus actinomycetemcomitans, are also commonly found at non-periodontal sites such as on the dorsum of the tongue, on the oral mucosa, in saliva, or on the mucosal surface of the tonsils. Re-infection of treated pockets is, therefore, likely unless an attempt is made to eliminate the organisms from all of these niches and as quickly as possible. The fewer the number of visits, the less chance there is for re-infection from (as yet) untreated sites.

Different preparations of chlorhexidine gluconate have also been used in an attempt to achieve adjunctive disinfection immediately after the completion of root surface instrumentation (Table 1-1). There is little evidence, however, to support the clinical value of the adjunctive use of chlorhexidine over mechanical instrumentation alone during full-mouth disinfection.