Identification of the Implant Site

Selection of the Implant Site

Imaging of the Implant Site

Dental implants are prosthetic devices implanted into the oral tissues either beneath the mucoperiosteal layer or in the bone to provide retention and support for the fixed or removable prosthesis. Although fabrication of dental implants dates back to many decades, the advent of dental root form implants (DRFIs) have paved way for universal acceptance of implants as replacement for lost teeth. The dental implant restorations not only enhance the esthetics for the patients, but also improve the oral function for speech and mastication. Hence, the dental root form implants (Figure 1) gained immense popularity among the dental practitioners as well as the patients in the dental profession. Nothing is more important in the dental implantology than the precise evaluation and placement of the implant structures in the maxilla and mandible. In order to do this effectively, one needs to precisely understand the surgical anatomy of the maxillofacial region and the anatomical variations that might be encountered. Secondly, they need to grasp the biomechanics of the dental implant material. Fortunately, now, the science behind the dental implantology is strong, backed with research and evidencebased trials. The fruits of the decades of clinical trials using various dental implant materials along with numerous loading protocols have refined the predictability of dental implants for the maxillofacial region. 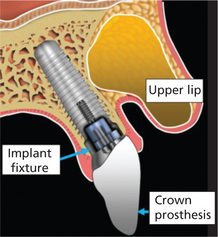 The treatment options that are available for replacement of single or multiple teeth in the oral cavity are removable partial denture (RPD), fixed partial denture (FPD) and implant prosthesis (IP). The RPDs which were not helpful in the maintenance of existing bone, compromise the esthetic result, need more bulk for cross-arch stabilization, easily trap food debris and plaque, and interfere with the speech and function. Similarly, the FPDs especially promote caries of the abutment teeth but if not well fabricated, lead to plaque retention in the pontic increasing periodontal risk, involve damage to adjacent teeth, fracturing of the porcelain, and have esthetic concerns for the anterior regions. The FPDs are contraindicated when there is poor abutment support, inadequate hard and soft tissues in the esthetic regions and in young patients with large pulp horns. The dental implants would be an ideal alternative for replacement of teeth.

Historically, there were three distinct forms of dental implants, namely, the subperiosteal (epiosteal), the transosseous (staple bone or transmandibular) and the endosteal (blade or plate, ramus-frame and root form) types. Dental practitioners should be familiar with the radiographic appearances of older dental implant systems although many of them are rarely used after the advent of the dental root form implants.

Subperiosteal implants are metallic meshes that are custom-built to fit over the alveolar processes and are located underneath the periosteum (Mupparapu and Beideman, 2000). Direct bone impressions via surgery would lead to the fabrication of mesh in a laboratory that fits under the mucoperiosteum (Figure 2). The framework normally rests on the mandible with no penetration into the bone. Two surgeries were involved in the fabrication of these implants. First surgery is for the impression and the second surgery is for the placement of the mesh. The first subperiosteal dental implant in the world was placed by George Dahl in Sweden. The first American subperiosteal implants were developed in 1947. Gershkoff and Goldberg placed the first subperiosteal complete denture implant manufactured with Vitallium (Moore and Hansen, 2004). Dr Leonard Linkow of New York made significant changes to the original design by incorporating fenestrations into the buccal peripheral struts which made it possible for the mucoperiosteum to reattach the bone in between these fenestrations. He also holds 35 patents on various designs of subperiosteal and oral implants. Multiple metallic posts extend from the mesh into the oral cavity crossing the mucoperiosteal barrier to support the prosthesis. Mandibular subperiosteal implants have been shown to be successful in many clinical studies and some of the implants reviewed were present in the mouth for more than 10 years. The success rate for these implants varied in many studies with higher success rate for 10-year periods and lower success rates for longer periods (Moore and Hansen, 2004). Computed tomography (CT) scans were also used to allow CAD/CAM fabrication of the framework, eliminating the need for impressions via surgery. Subperiosteal implants are no longer preferred after the success of endosteal implants although one can occasionally see them in clinical practice with varying degrees of presentation (Beddis et al, 2012). 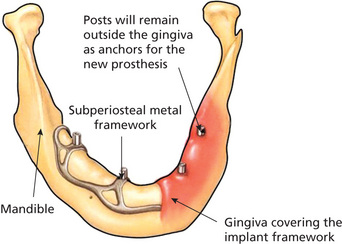 The transosseous implants, also known as staple bone implants or transmandibular implants are restricted to the anterior region of the mandible. They penetrate both cortical plates and pass through the entire thickness of the bone.

There are three forms of endosteal implants: the root form, the ramus frame and the plate or blade form implants. Blade implants are rectangular in shape similar to a razor blade. These are used over horizontal column of bone. One or more posts usually extend into the oral cavity to permit fixation of the prosthesis. The only blade implants that are seen clinically at present are the previously placed implants that either failed or fractured and the patient reported for treatment. One such example where the blade implant failure led to the osteomyelitis in the mandible is shown in Figure 3. The root form implants can be either cylinder-type, screw root type or a combination of both. These implants use the vertical column of bone unlike the blade implants.

Figure 3 Failing blade implants in the mandibular molar region as seen from the panoramic reformatted image from a Denta-Scan® CT study. On the right is a picture of a premolar blade implant manufactured by Oraltronics, Russia

Types of dental implants available (according to the material used)

The following are the commonly used implants according to the type of material used for fabrication:

The most commonly used implants are:

This is light weight, biocompatible and corrosion resistant. The material is many times stronger than compact bone and the modulus of elasticity is five times greater than that of compact bone. This equals the mechanical stress transfer of compact bone.

This is stronger and used for small diameter implants.

Implants are indicated in many situations in patients with partial or full edentulism. They are indicated in patients with a history of difficulty in wearing a removable partial denture or have a long span fixed partial denture. They are also indicated in patients with severe bony changes secondary to prolonged use of complete or partial dentures. The implants are ideal for patients with poor oral muscular coordination and in those with parafunctional habits compromising the stability of the prosthesis. Patients with hyperactive gag reflex, unfavorable number and location of abutments, single tooth loss and those who refuse to wear dentures for psychological reasons are all candidates for dental implants. In patients wearing complete dentures, bite force is decreased from about 200 to 50 psi with decreased masticatory efficiency. Food selection is limited and healthy food intake is decreased among these patients. Hence the dental implants will greatly help them in getting back the normal occlusal function added with the enhanced esthetics. Finally, in patients with tooth agenesis (congenitally missing teeth), the implants are ideally suited.

Patients who lost the entire dentition will show significant changes to the facial profile after loss of teeth chiefly due to the alveolar resorption and the loss of vertical dimension (Figure 4). Restoration of function and esthetics would then become the goal for any prosthesis without compromising on the masticatory efficiency.

There are three aspects of patient management that the practitioner should remember when planning treatment for dental implants:

This requires patient assessment via thorough medical and dental history, laboratory findings and radiographic evaluation of the existing teeth and edentulous ridges.

This involves selection of appropriate implant material and imaging software to display the cone beam computed tomographic volumes and a good communication with the laboratory.

This could be easily accomplished via virtual implant selection and placement. The identification of appropriate length and width of the implant fixture would be determined at this stage taking into consideration, the proximity of the nerve canal and/or sinus cavity.

Identification of the Implant Site

Selection of the patient

Patient selection is a key factor in going forward with the identification of future implant site(s). This essentially boils down to the assessment of the medical and dental status of the patient. If the patient’s medical and dental history precludes a dental implant placement and a good prognosis, then that should be communicated to the patient ahead of time. Systemic health of the patient plays a vital role in the overall selection of the patient. Any medical condition that delays or alters wound healing should be identified first. A good example for this is ‘diabetes mellitus’. Uncontrolled type 1/type 2 diabetes or untreated diabetes usually results in delayed wound healing. Diabetes (type 1 and type 2 combined) affects approximately 25.8 million people in the Unites States alone. There are at least 79 million people who are considered prediabetics (National Diabetes Fact Sheet, 2011, Centers for Disease Control and Prevention [www.cdc.gov/diabetes]). Worldwide, as per 2011 World Health Organization estimates, around 346 million people have diabetes (www.who.int/mediacentre/factsheets/fs312/en/index.html).

Wound healing occurs as a cellular response to injury and involves activation of keratinocytes, fibroblasts, endothelial cells, macrophages and platelets. Many growth factors and cytokines released by these cell types are essential for coordination and maintenance of healing process (Brem and Tomic-Canic, 2007). Deficiency of any of the above factors would lead to improper and sometimes non-healing of the extraction site as well as the implanted site. Since the success of implant therapy is tied to the osseointegration, this is a crucial step in the overall implant therapy. Several medical conditions that would jeopardize the success of an implant should be considered during the screening process. The list (Hwang and Wang, 2006) includes the following absolute contraindications and relative contraindications:

Due to the increased risk of complications following a myocardial infarction (MI) or a cerebrovascular accident (CVA), the dental practitioner must wait until preliminary stabilization. It is recommended that elective dental care is deferred for at least 6 months status post MI or CVA and the patient is medically stable.

It is essential that the dental practitioner defers placement of implants in these patients for 6 months to 1 year after the cardiac surgery. Anticoagulants would be used depending on whether the valve is bioprosthetic or mechanical in which case, caution should be exercised.

3 Prior history of bleeding

Since uncontrolled bleeding stems from a multitude of systemic conditions, patients who are on oral anticoagulant therapy should be carefully evaluated and the bleeding time, international normalized ratio (INR) must be assessed. An INR of 2.2 or lower is recommended for surgical procedures by Fazio and Fang (2003).

If the WBC count falls below 1,500–3,000 cells/mm3 the patient is not considered a good candidate to receive implants as the ability to combat infections, repair or regeneration would be compromised. With a near normal WBC count and a grossly abnormal neutrophil count (less than 2,000 cells/mm3), the normal range being 3,500–7,000 cells/mm3, a medical consultation is necessary before planning dental implants. It is generally considered that when the patient’s CD4+ T-cell count measures below 500 cells/mm3, he/she is considered immunosuppressed and appropriate care should be exercised.

Both ionizing radiation and chemotherapy disrupt hematopoiesis, and implantation should be deferred in such situations as wound healing is delayed. In addition, if the salivary glands are involved in the line of fire, there would be substantial xerostomia which in turn, would contribute to poor oral hygiene and increase in dental caries secondary to xerostomia. Studies have shown that in about 3–35% of patients, spontaneous or traumatic osteoradionecrosis would be a complication (Marx and Johnson, 1987). When the patient is on cytotoxic anticancer drugs, granulocytopenia followed by thrombocytopenia are expected which might lead to infection, hemorrhage, mucositis and pain. Implant therapy should be deferred until after the patient is completely off the cytotoxic medication.

6 Psychiatric disorders/>
Only gold members can continue reading. Log In or Register to continue