Knowledge of local anatomy and the physiology of healing tissues is the sine qua non of the surgeon’s ability to achieve stable results. A practical review of regional and periodontal anatomy needs to consider both the macro and micro levels that have a direct effect on surgical care. The basic process and current knowledge of wound healing are reviewed. The general principles involved are then applied to periodontal surgery procedures and utilization of dental implants. Throughout this exploration, several themes are reinforced:

1. For parts to heal, they must be stabilized relative to each other. Lack of mobility allows reconnection of extracellular matrix and vascular supply between the wound interfaces and eventually leads to an ordered stable repair or regeneration.

2. Understanding microvascular patterns and local preservation is the key to minimal morbidity. Poorly designed flaps can lead to soft tissue necrosis and subsequent bone loss or sequestration if the bone component is dependent on the soft tissue supply.

3. Hard and soft tissue architectureinfluences microvascular architecture.The relative physical dimensions and quality of tissue content determine blood vessel location and volume. The latter is a paraphrase of the term biotype.Recognition of biotype is part of treatment planning.

Constant reflection on these three themes will maximize the application to everyday surgical problems.

THE TISSUES AND THEIR VASCULAR SUPPLY

While the facial artery has some supplementary supply to the lips and nose and a submental branch supplies the sublingual gland, the major blood supply to the oral structures is through the tributaries of the maxillary artery and its regional divisions: the mandibular, the pterygoid (in the infratemporal fossa), and the pterygopalatine (in the sphenopalatine fossa) (Woodburne 1965) (Fig. 3.1).

Fig 3.1 Distribution of the maxillary artery. (From Woodburne 1965.) 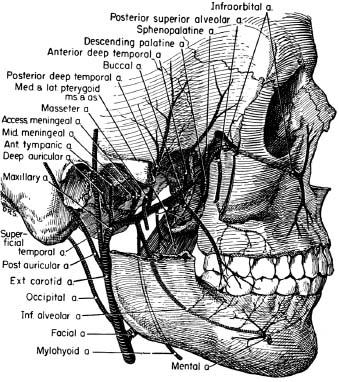 The mandibular branches of the maxillary artery are the lingual, mylohyoid, and inferior alveolar, which enters the mandibular foramen and distributes to bone, teeth, and periodontal ligament and, before spreading out to supply the anterior teeth, emerges in a reverse curl through the mental foramen. The pterygoid division supplies muscles with the buccinator branch, also supplying the cheek mucosa.

The pterygopalatine division courses through the pterygopalatine fossa and sends four major branches to the posterior superior alveolar, descending palatine, infraorbital, and spheno-palatine. The posterior superior alveolar enters the distal of the maxillary tuberosity and supplies the teeth, gingiva, and maxillary sinus. The descending palatine exits through the greater palatine foramen apical to the molars and courses forward along the palatal vault (Fig. 3.2), supplying glands and mucosa until it reaches the incisive canal, where it anastomoses with the incisive branch of the sphenopalatine artery. The infraorbital passes medial through the floor of the orbit with branches to the mid and anterior incisive areas, the maxillary sinus, and the lacrimal duct and then exits through the infraorbital notch to the face. The sphenopalatine rises to the roof of the nose and then distributes forward and down to the lateral nasal wall (common with the medial wall of maxillary sinus) and medially along the vomer groove to the incisive canal, where it descends to merge with the incisive branch of the greater palatine (Woodburne 1965) (see Fig. 3.1). 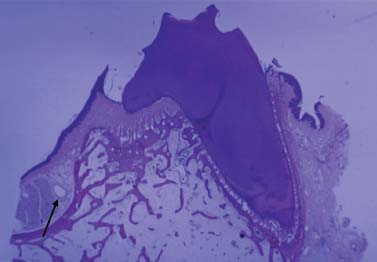 The general pattern of flow is from distal to mesial with respect to the alveolar structures. The bone compartment of the basal and alveolar bone is supplied from within their defining cortical plates (i.e., from inside-out). If teeth are present, they are surrounded by a cortical socket of woven bone that has numerous perforations connecting the marrow with the periodontal ligament (PDL) net. This PDL net is also supplied from the apical where vessels enter the tooth pulp canal. The flow of the PDL net is outward to the attached gingiva (Folke 1965, Folkman and Klagsbrun 1987) (Fig. 3.3). 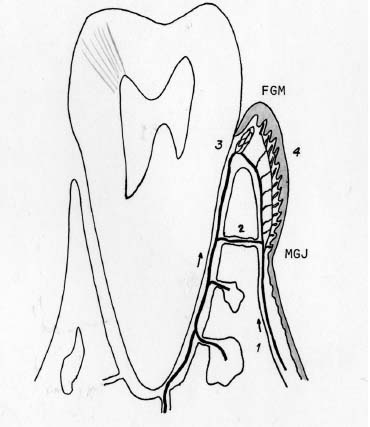 Clarification of bone terminology is necessary to discuss terms that are useful clinically. Bone has two compartments: a hard mineralized component and a soft inner marrow space. Throughout the body, these two components are arranged in various ways and proportions—the local bony architecture. The interface between the internal soft tissue (marrow) and the external investing soft tissues is occupied by a quiescent lining layer—the endosteum and periosteum,respectively. Structurally, the thick mineralized layers that define the bone’s shape or line the major inclusions (major vessel channels and tooth sockets; Figs. 3.4 and 3.5) are referred to as compact or cortical bone. The inner compartment or marrow space is cross-braced by mineralized struts of various thicknesses, the trabeculae. These trabeculae divide the space into cells of various sizes and are termed cancellous bone (Figs. 3.4 and 3.5). 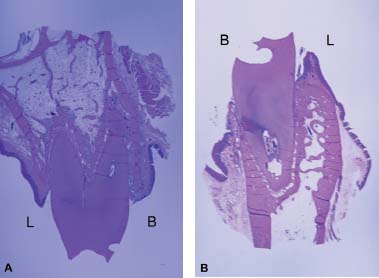 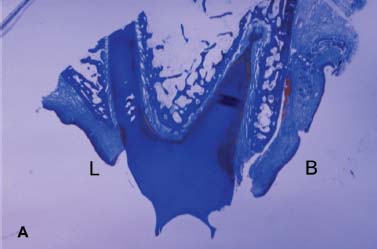 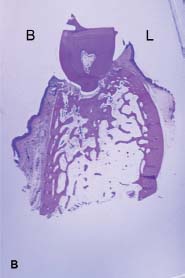 In clinical discourse, the word density is often misapplied in describing bone structure. Both cortical layers and trabeculae have a fairly uniform mineral density. What is more relevant to surgery is the internal and external microarchitecture—the three-dimensional size and arrangement of these compact and cancellous layers. As can be seen in the representative pictures, the size and distribution of trabeculae and cortical layers vary considerably from one location to another (see Figs. 3.4 and 3.5). Cortical layers form the outer borders of the facial and lingual (palatal) plates of the alveolar and basal bone and the lining of the tooth sockets. Cortex is also present at the borders of the sinus, nose, and vascular channels—the inferior alveolar canal, mental foramen, and incisal canal.

Cortical by definition is “without marrow” but “not without a vasculature.” These cortical parts of bone are densely calcified collagen layers with self-entrapped osteoblasts (osteocytes).These enclosed cells maintain contact with each other and outside nutritional sources through tiny cytoplasmic extensions within channels called canaliculi. There is a critical distance from the vasculature to these canals beyond which these cells cannot survive (0.1 to 0.2 mm) (Ham 1965). Even in the cortical bone, small vascular channels perfuse the structure (Fig. 3.6). Marrow of cancellous bone can be fibrous or fatty, or a combination, and it has more varied vascular supply as well as cells with regenerative potential. 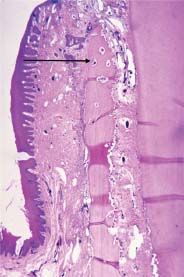 The spatial position of teeth in the alveolar housing requires consideration because it influences the vascular distribution in the adjacent bone mass. In most cases, the teeth are set toward the buccal limits of their confining bone “house,” commonly called the alveolar bone. This results in a very thin, entirely cortical bone plate on the buccal (Fig. 3.6), while the lingual limits can have a thicker compact surface with marrow between it and the alveolus as the structure extends apically. The vascular supply to these thin buccal plates, because there is no marrow supply, is limited to diffusion from the buccal through the investing mucosal tissues and internally from the PDL. (Note in Fig. 3.6 that resorption is proceeding on the PDL side of the thin buccal plate, which has had a full-thickness flap reflected.) In interproximal, lingual, and furcal areas, the internal marrow supply supplements the PDL.

The Maxilla and Mandible

The maxilla and mandible have major differences in their bony architecture, and this is reflected in the pattern of their vascular supply. The maxilla is of lighter construction and interfaces with other cranial structures of intramembranous origin. The mandible is heavy, more self-contained, and closer to the endochondral embryology of the other long bones.

In the maxilla, as noted, the major supply of blood comes from the pterygopalatine division of the maxillary artery. In the case of the maxillary sinus, the blood flow is from the superior alveolar, infraorbital, and sphenopalatine arteries. A major arterial branch is occasionally found running anterior to posterior along the lateral wall of the sinus. This artery may fall within the marrow of the antral wall if the wall is thick enough, or sometimes within the periosteal layer of the sinus lining immediately inside (Fig. 3.7). 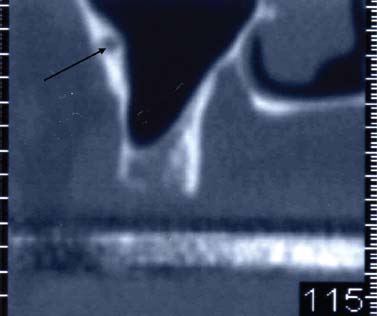 The mandibular supply is less diffuse than the maxillary, with major vessels entering through the mandibular foramen as the inferior alveolar and then spreading out confined within th/>