4: The Contribution of Periodontics to Orthodontic Therapy

The Contribution of Periodontics to Orthodontic Therapy

Decortication or corticotomy means simply the intentional cutting or injury of cortical bone. While the bony jaws are composed of both cortical and medullary bone in various combinations depending on site and patient demographics, the periodontal surgery of interest in contemporary selective alveolar decortication involves only surgical injury of alveolar cortical bone.

The application of corticotomy surgery to correct malocclusion was first described in 1892 by L. C. Bryan, but it was Heinrich Köle in 1959 who reintroduced alveolar corticotomy to resolve malocclusion (Köle 1959). He combined interdental alveolar corticotomy surgery with a through-and-through osteotomy apical to the teeth. Generson et al. in 1978 offered a modification of the Köle protocol and eliminated the subapical osteotomy portion of the surgery.

In 2001, Wilcko et al. described selective alveolar decortication with augmentation grafting combined with orthodontic treatment. They patented and trademarked their technique as Periodontally Accelerated Osteogenic Orthodontics (PAOO). Full-thickness labial and lingual alveolar flaps were laid adjacent to the teeth intended for movement, and selective decortication surgery was performed. Given that the surgery was done only in the area of desired tooth movement, it was the thickness of cortical bone that dictated where and how the cortical bone was injured. The depth of the decortication cuts barely penetrated into medullary bone and bleeding was promoted; care was taken not to injure any tooth or encroach on the periodontal ligament. An allograft of resorbable grafting material plus antibiotic was applied directly over the bleeding bone, and the surgical site was closed using Gore-Tex suture material. A frequently used grafting mixture was equal portions of demineralized freeze-dried bone (DFDBA) and bovine bone (Osteograf/N-300 or Bio-Oss) wetted with clindamycin phosphate (Cleocin) solution.

Wilcko et al. observed rapid orthodontics following PAOO and active treatment times of 6 to 8 months were common. They questioned Köle’s precept of “bony block” movement and offered an alternative hypothesis that rapid tooth movement resulted from marked but transient decalcificationrecalcification of the alveolus. Frost, an orthopedic surgeon, had described a direct correlation between degree and proximity of bone trauma and intensity of physiological healing response, which he coined Regional Acceleratory Phenomena, or RAP (Frost 1983), and the decalcification-recalcification described by Wilcko et al. (2001, 2003) was consistent with RAP.

The initial decortication protocol used by the Wilcko brothers did not include augmentation alveolar grafting. Computed Tomography (CT) scans were taken on the first series of patients to compare pretreatment status with immediate post orthodontics and at least 1-year retention conditions. The CT scans of the alveolus immediately after braces were removed showed a paucity of alveolar bone in the areas where decortication surgery was performed. However, the retention images demonstrated that a minimally adequate amount of mineralized alveolar bone would return if the soft tissue periodontal envelope remained intact (Fig. 4.1). 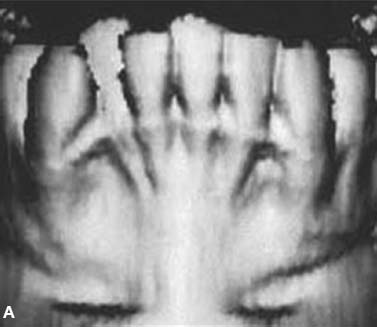 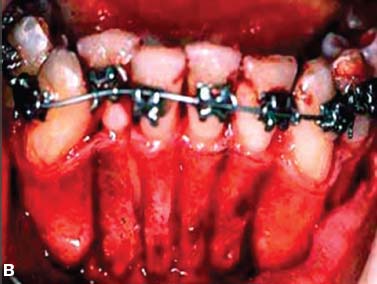 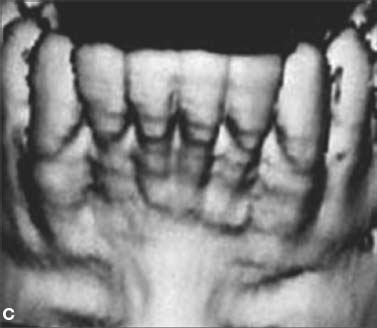 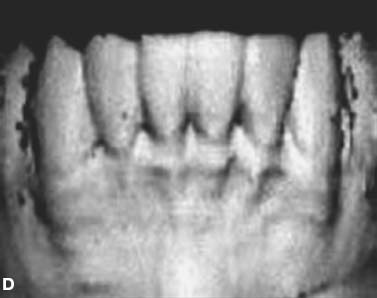 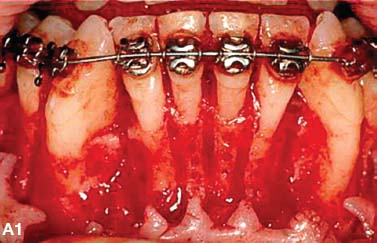 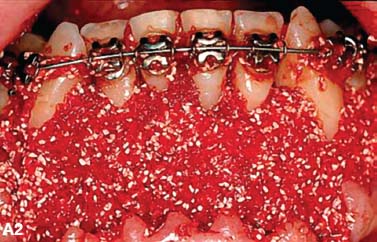 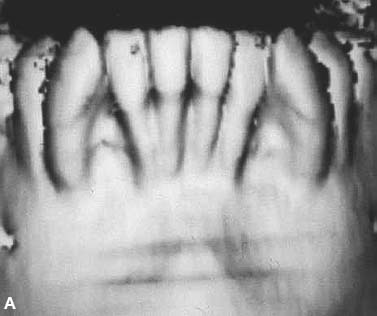 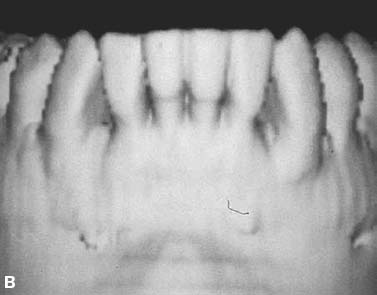 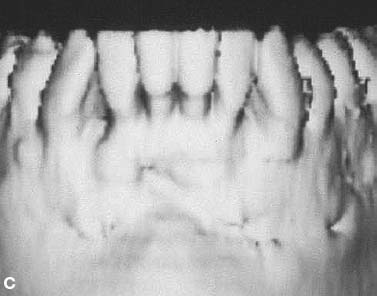 An additional benefit of augmentation bone grafting is the repair of alveolar cortical bone fenestrations and dehiscences (Fig. 4.3). The grafting procedure is done without membranes because full-thickness flaps are used followed by primary closure in a healthy periodontium. Under these circumstances, migration of the epithelial attachment is not likely to occur, and the intact periosteum serves as a natural “membrane.” 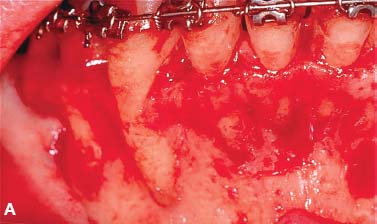 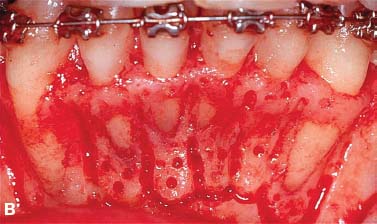 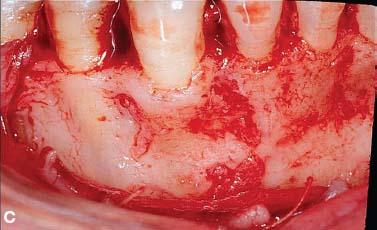 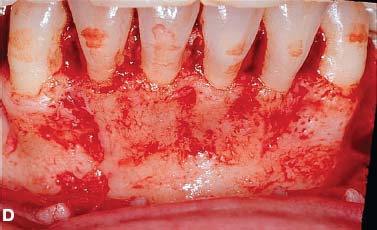 PAOO has contributed greater stability of orthodontic clinical outcomes and less relapse. Stability of orthodontic clinical outcomes was analyzed by Nazarov in 2003 using the Objective Grading System (OGS) sanctioned by the American Board of Orthodontics (ABO). While no differences were observed in nonextraction therapies at immediate post treatment between PAOO and non-PAOO groups, three of the nine OGS variables (alignment, marginal ridges, and total score) were significantly better in the PAOO group at retention. O’Hara (2005) compared nonextraction orthodontic treatment of moderate malocclusions and found no differences in the OGS alignment variables at post treatment. But at retention, alignment had improved in the PAOO group, whereas in the two non-PAOO groups, fixed and removable appliance retention, alignment had relapsed. In summary, immediate post orthodontic treatment results following nonextraction therapy are statistically the same with or without PAOO. However, during retention, the clinical outcomes of PAOO patients improved and did not demonstrate relapse.

PAOO increases the scope of orthodontic tooth movement and the positions of the teeth after decortication and augmentation grafting are stable long-term. Sarver and Proffit (2005) offered guidelines as to the limits of central incisor tooth movement in the adult patient with orthodontic treatment alone. Ferguson et al. (2006) suggested that these limits can be expanded 2-fold to 3-fold in all dimensions except retraction following PAOO (see Fig. 4.4) and that the stability of these positions is probably due to loss of tissue memory from high turnover of the periodontium as well as increased thickness of the alveolar cortices from the augmentation grafting. Rothe et al. (2006) found that patients with thinner mandibular cortices were at increased risk for having dental relapse—hence the necessity for osseous grafting during the PAOO procedure. 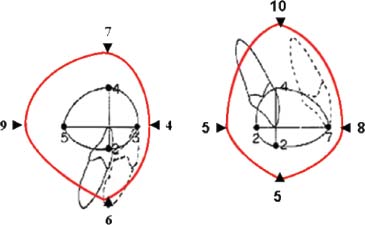 In summary, the contributions of periodontal therapy to orthodontic treatment vis-à-vis PAOO is to increase alveolar volume and enhance the periodontium, enhance the stability of orthodontic clinical outcomes (less relapse), increase the scope of malocclusion treatable without orthognathic surgery, and reduce active orthodontic treatment time over 3-fold. These benefits are realized for two reasons: (1) tissues lose memory due to high hard and soft tissue turnover induced by the periodontal decortication, and (2) augmentation bone grafting increases alveolar volume and thickness of the alveolar cortices.

The clinical technique involving selective alveolar decortication is a form of periodontal tissue engineering resulting in a transient osteopenia and high turnover adjacent to the injury site. Alveolar decortication initiates a healing response, the degree of which is directly related to the intensity and proximity of the surgical insult. In healthy tissues, bony healing is synonymous with high osseous turnover, calcium depletion from the hydroxyappatite crystal lattice, and diminished bone density but not bone matrix volume (Frost 1983). Bogoch et al. (1993) made a penetrating surgical incision into the head of the tibia in rabbits and studied the healing response adjacent to the surgical wound. They found a 5-fold increase in medullary bone turnover adjacent to the corticotomy site. Buchanan et al. (1988) documented a similar observation in alveolar bone following tooth extraction, as did Yaffe et al. (1994) after alveolar periosteal flap elevation and Verna et al. (2000) after tooth movement. 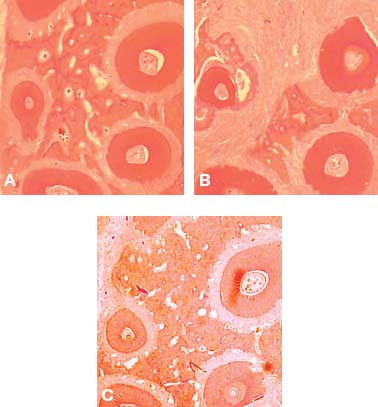 Fig. 4.6. Amount of apposition of the lamina dura is shown in cross section of the dentoalveolus of the rat at 4 weeks, the end of the first series of vital stain injections. Total width of apposition as revealed by the three stains together was statistically greater on the decortication side (A, 0.051mm) at 3 weeks than the control side (B, 0.037mm) at 3 weeks. 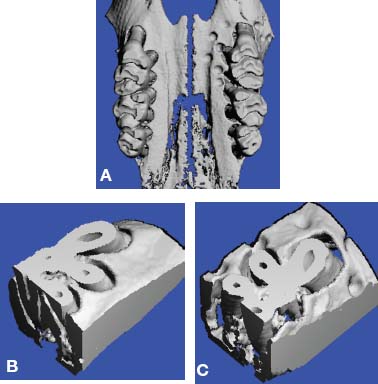 Conceptually, increased tissue turnover (osteopenia) is a condition that favors rapid tooth movement. This tenet was demonstrated by Verna et al. (2000) using a rat model by moving teeth after pharmacologically inducing high and low bone turnover. They showed significantly greater tooth movement in the high turnover group compared with normal and low bone turnover groups. In our laboratory rat studies (Pham-Nguyen 2006, Sebaoun 2005), surgical injury to the alveolus induced a dramatic increase in tissue turnover that was expressed both spatially and temporally. The effect of alveolar decortication was localized to the area immediately adjacent to the injury. It is obvious that considerable medullary bone demineralization occurs immediately adjacent to the decortication site. Although induced osteopenia is a transient condition in the functionally normal alveolus, it was surmised that tooth movement perpetuates the decalicified condition of the trabecular bone (Fig. 4.8). 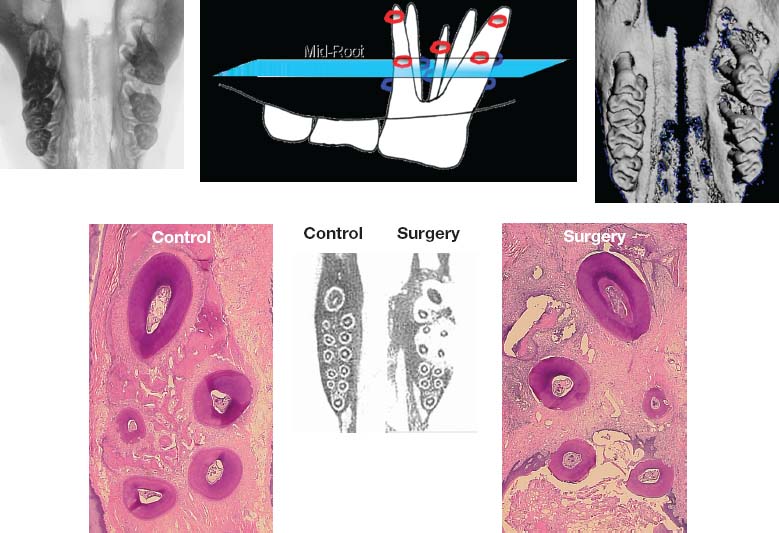 PERIODONTALLY ACCELERATED OSTEOGENIC ORTHODONTICS IN THE TREATMENT OF CROWDING

Using the PAOO technique, cases of moderate dental arch crowding are routinely completed in 4 to 6 months instead of 18 to 24 months of active orthodontic treatment, and the results have been shown to be remarkably stable (Figs. 4.9 and 4.10). 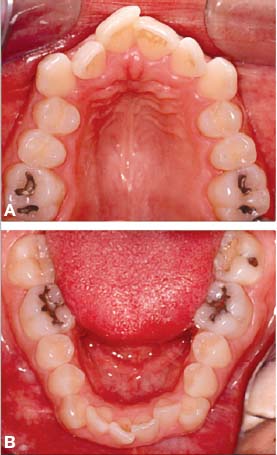 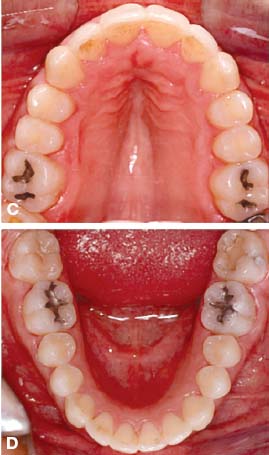 Fig. 4.10. Retention outcome at 2 years (A,B) and 9 years (C,D) after the completion of PAOO treatment. Improvement during retention and long term stability are likely due to high tissue turnover induced by decortication and increase in cortical bone thickness. 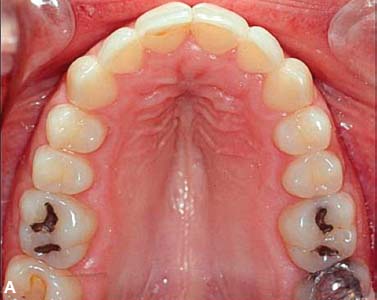 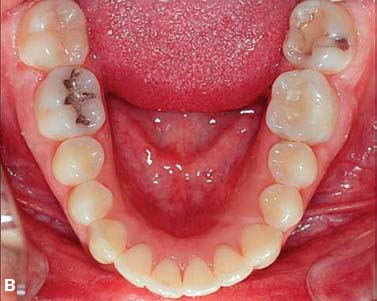 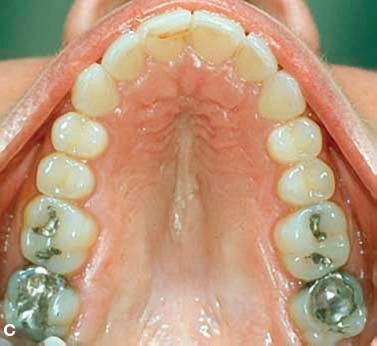 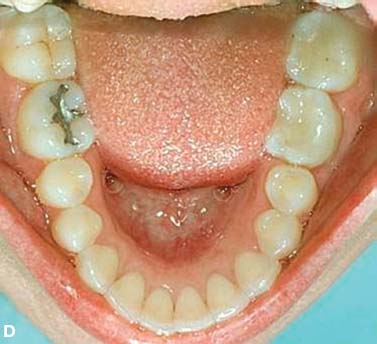 With the exception of the third molars, the maxillary canines are the most frequently encountered impaction, with an incidence of approximately 2% according to Ericson and Kurol (1987). The incidence of maxillary canine impaction is 3 times greater in females than in males and is often associated with missing or peg-shaped laterals (Bec et al. 1981, Peck et al. 1994). Maxillary permanent canines are impacted palatally much more frequently than labially (85% palatal compared with 15% labial; Bass 1967, Hitchin 1956, Jacoby 1979). Rayne (1969) has pointed out that labially impacted canines are often associated with inadequate arch space. Interceptive treatment of impacted maxillary canines can often be successful in 10- to 13-year-olds depending on the degree of the impaction (Jacobs 1992). The more severely impacted maxillary canines typically require combined surgical/orthodontic treatment (Bishara 1992).

Previous authors have indicated that details of the recovery technique depend on the type of impaction. When the crown is not covered by bone and there is a broad band of keratinized gingival tissue present, Kokich and Mathews (1993), Shiloah and Kopczyk (1978), and Jarjoura et al. (2002) have suggested a surgical window (gingivectomy) to expose the shallow impaction. In situations where there is only a narrow zone of gingival attachment and a relatively shallow labial or mid-alveolar bony impaction, an open technique consisting of an apically repositioned flap is more suitable according to Wong-Lee and Wong (1985) and Vanarsdall and Corn (1977). When the bony impaction is deep in the vestibule, mid-alveolar, or impacted palatally, Vermette et al. (1965), McDonald and Yap (1986), and Smukler et al. (1987) have suggested erupting the canine through the gingiva following primary surgical flap closure.

Recovery of labially impacted maxillary canines is illustrated in the treatment of a girl aged 14 years 4 months using selec-tive decortication technique (Figs. 4.11, 4.12, and 4.13). A full-thickness labial flap, using a sulcular incision with vertical releasing incisions mesial to the first premolars, was reflected to reveal upper cuspid crowns labial to the upper permanent lateral incisors. No lingual flap was reflected. The upper primary canines were extracted, and the soft tissue follicle and thin layer of bone surrounding cuspid crowns were removed. A path (trough) was cleared for the forced eruptions by removing the facial cortical plate between the cuspid crowns and extraction sockets including the facial plates over the sockets. In addition, numerous intramarrow penetrations were made to stimulate alveolar bone turnover and to induce RAP or osteopenia. At least 1.5 mm of bone was left undisturbed mesial to the first premolars and distal to lateral incisors. An orthodontic bracket was placed in an optimal position of the upper right permanent canine, but the upper left permanent canine was rotated, which necessitated placing the bracket on the lingual surface. On the right side, the bracket was exposed with a vertical incision in line with the bracket, and then suturing the flap back into the original position. The upper left canine was covered by the flap and sutured back in its original position. Because the upper left canine was covered by the flap, a backup ligature wire was also used. In this case, a resorbable Vicryl suture was used.