All types of lasers are made with the same components, the specifics, ­however, vary. All lasers have the following five components:

1. Active medium, which are materials in the core of the laser, can be gas, solid, liquid, or crystals and are usually the name the laser.
Gas lasers use carbon dioxide, argon, krypton, and mixtures, such as helium-neon. These lasers are often pumped by electrical discharge. Solid lasers use crystals and glasses. The solid host materials are usually doped with an impurity such as chromium, neodymium, erbium, or titanium ions. Typical hosts include yttrium aluminum garnet (YAG), yttrium lithium fluoride (YLF), sapphire (aluminum oxide), and various glasses. Solid-state lasers use Nd:YAG, Ti:sapphire, Cr:sapphire (usually known as ruby), chromium-doped lithium strontium aluminum fluoride (Cr:LiSAF), Er:YLF, Nd:glass, and Er:glass. These lasers are usually pumped by flashlamps or light from another laser. Liquid lasers use liquid dye. These lasers include a tunable-dye laser, which can provide wavelengths from 400 to 1000 nm, depending on the composition of the liquid dye.
Semiconductors are a type of solid laser, in which the movement of electrons between materials with differing dopant levels can cause laser action. Semiconductor lasers are typically small and can be pumped with a simple electric current, enabling them to be used in consumer devices such as compact disc players. An example of a semiconductor is a soft-tissue diode laser (Table 3.1).
2. Pumping mechanism, which develops a population inversion in the active medium (electrical current discharge [e.g., carbon dioxide]).
3. Optical resonator, which amplifies and collimates the developing laser beam.
4. Cooling subsystem.
5. Controller subsystem (microprocessor).

Table 3.1 Lasers and Their Characteristics. 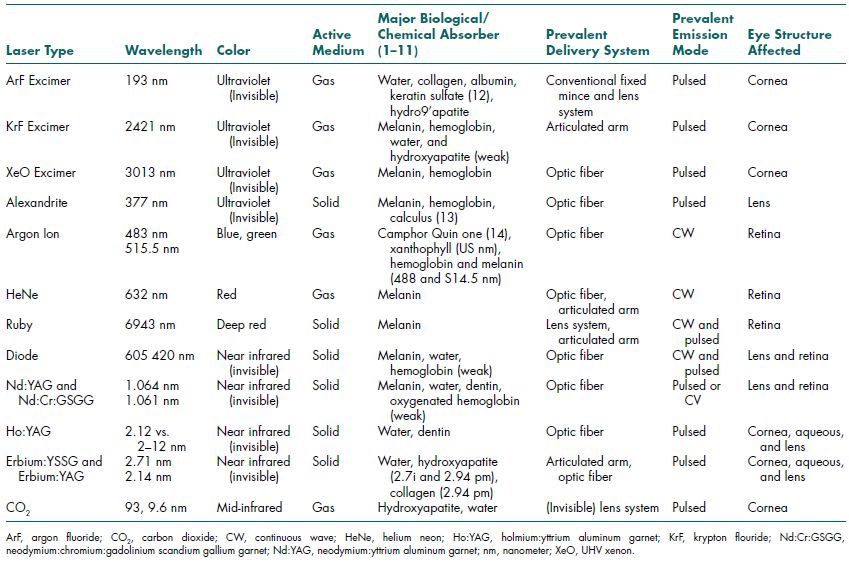 Additionally, each laser has operating parameters that are unique, and they include:

Energy per pulse, if appropriate.

Lasers have a variety of emission modes, which are ways that the laser can operate.

The next emission mode is chopped or gated; it has a mechanically ­closing door that allows the clinician to control the duty cycle, for instance, it may be at 50% on and 50% off.

There is also a laser that operates at a free-running pulsed rate, which is in short bursts of energy, dependent on the excitation source in the dental laser. This laser operates at a low level of energy until the burst, which is usually 1000 watts.

Lasers have these emission mode options for various reasons. Time is always a restraint in the dental world; using the laser in CW mode is ­beneficial. Occasionally the laser can be used in gated or pulsed mode; this is to allow tissue relaxation.

TYPES OF POWER AND CYCLES

Duty cycle is equal to emission and is expressed in a percentage of what the laser is actually firing in relation to total laser activation time.

Average power is power on a sustained basis, whereas peak power is power level during the pulse. Power density is watts/cm2 and is the concen­tration of photons in a unit area. It measures the/>