Figure 23.1 (A) Some features of Class II, division 2 malocclusion: (i) mild mandibular retrognathia, with a pronounced chin point and reduced lower anterior face height, (ii) high lower lip line, and (iii) retroclined maxillary central incisors and deep overbite. (B) Traumatic overbite leading to (i) periodontal damage on the palatal aspect of the upper right lateral incisor and (ii) severe attrition. (C) The management of Class II, division 2 malocclusion with functional appliances involves (i) proclining the maxillary incisors into a Class II, division 1 relationship, which allows forward posturing of the mandible, and (ii) correction of the overjet. (D) Reduction of an increased interincisal angle is important for stable overbite correction. 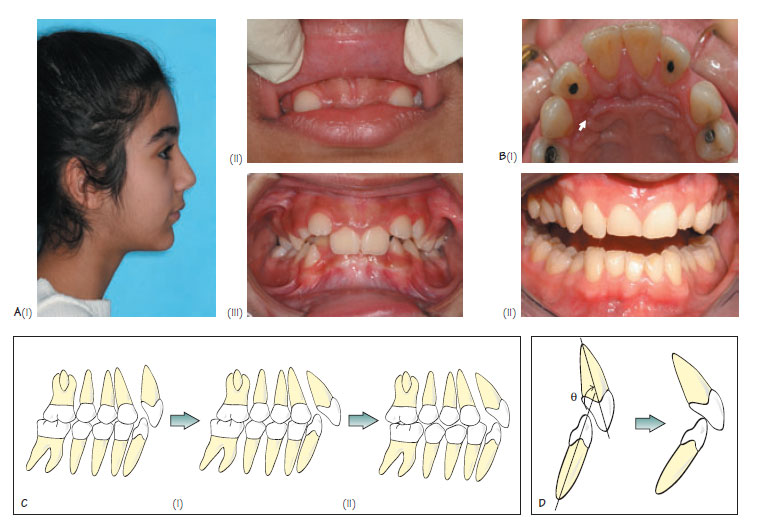 Class II division 2 is the term used to describe a malocclusion where the lower incisal edges occlude posterior to the cingulum plateau of the upper incisors and the upper central incisors are retroclined (British Standards Institute classification). The overbite (OB) is characteristically deep, the overjet maybe normal or increased, and the molar relationship is Class II. There is an association between this malocclusion and impacted maxillary canines. The prevalence of Class II division 2 is estimated to be approximately 10% among Caucasians. This malocclusion has a strong genetic association.