Many dental procedures trigger orofacial pain, necessitating that the practitioner provide pain control to improve patient postoperative comfort and to decrease anxiety about future dental treatment.1–3 This chapter reviews strategies to manage acute orofacial inflammatory pain in particular. The use and indication of analgesics in the management of myalgia, arthralgia, mucositis, and headache are described in chapters 22,23, and 25. Control of anxiety, although related to pain control, is beyond the scope of this chapter.

Pharmacologic management of dental pain is accomplished through one of three general mechanisms: blocking the nociceptive impulse along the peripheral nerve, reducing nociceptive input from the site of injury, or attenuating the perception of pain in the central nervous system (CNS). Accumulating evidence suggests that it is also possible to decrease clinical pain over the first few days postoperatively by inhibiting the development of central sensitization due to the nociceptive input that occurs during the perioperative period (see chapter 5). These strategies are additive, often without increased adverse effects, and can be used to prevent pain rather than to manage pain after its onset.

Input along trigeminal (V) nerve pathways is routinely blocked for dental procedures by administering a local anesthetic in the vicinity of the relevant nerve. The duration of local anesthetic agents such as lidocaine and mepivacaine is usually 1 to 2 hours postinjection. If the procedure has initiated the cytokine cascade leading to inflammation, the offset of local anesthesia coincides with peak release of important pain mediators such as prostaglandins and bradykinin.4 It is not surprising, then, that anesthetic offset is accompanied by intense pain since these mediators are maximizing nociceptive input from direct effects on nerve endings. Administration of a long-acting local anesthetic such as bupivacaine or etidocaine provides a method of blocking postoperative pain for hours after painful surgical procedures. This postpones the onset of sensation until the peak levels of inflammatory mediators have subsided and analgesics are starting to exert an effect.5–7

Reducing nociceptive input from the periphery

Recognition of the effects of locally released mediators of pain and inflammation on the sensitization of peripheral nerve endings suggests that interfering with the release or actions of these mediators may provide therapeutic benefits. Mediators such as prostaglandin E2 (PGE2) sensitize nerve endings, signal pain, and potentiate the actions of other inflammatory mediators such as bradykinin. Sensitization of peripheral nociceptors is minimized in the absence of PGE2, which attenuates pain sensations (see chapter 6 for review). Therefore, drugs that block prostaglandin synthesis or function after tissue injury are effective for reducing inflammatory pain (Fig 21-1). This information has an important practical application: pretreating patients with nonsteroidal anti-inflammatory drugs (NSAIDs) before or soon after dental surgery blocks cyclooxygenase (COX) enzymes before the initiation of tissue damage results in the synthesis of proinflammatory cytokines. A well-documented strategy for blocking pain in the immediate postoperative period is the administration of NSAIDs before pain onset (Fig 21-2).5,9,10

Fig 21-1 (a) Postoperative immunoreactive prostaglandin E2 (PGE2) concentrations at the surgical site in patients pretreated with dexamethasone or placebo, and at pain onset (arrow) after the administration of ketorolac or saline placebo. (b) Suppression of pain by the NSAID ketorolac is consistent with decreased levels of PGE2. Adapted with permission from Dionne et al.8 VAS = visual analog scale. * P < .05 vs placebo. † P < .05 vs dexamethasone and placebo. 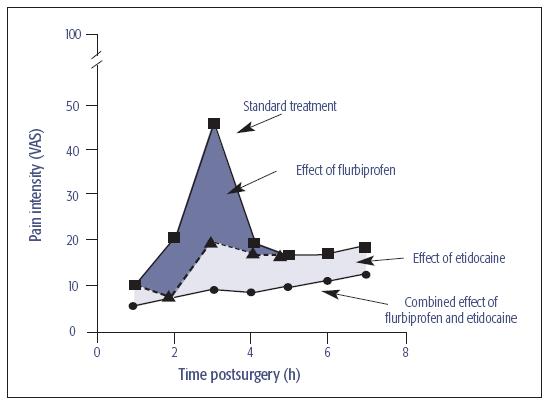 Attenuating the perception of pain in the CNS

The CNS reacts to nociceptive input with changes that lead to the development of central sensitization and hyperalgesia, both of which can prolong pain and result in pain from non-noxious stimuli. Inhibition of these processes has been demonstrated by the use of long-acting local anesthetics6,7 and the preventive use of anti-inflammatory drugs,9,10 which are additive as a combination for minimizing immediate postoperative pain (see Fig 21-2).5

Even when using preventive strategies, some patients still experience postoperative pain of moderate to severe intensity that requires the use of drugs that act in the CNS to inhibit nociceptive transmission. For acute pain, opioid drugs are one commonly used drug class. The use of opioids for acute pain usually results in pain relief but is accompanied by a high incidence of adverse effects such as nausea, vomiting, and drowsiness. The relationship between opioid analgesia and side-effect liability is illustrated by findings of oxycodone use for postoperative dental pain. Increasing doses of oxycodone (2.5 mg, 5 mg, and 10 mg) in combination with 400 mg of ibuprofen did not result in any additive analgesia until the 10-mg dose of oxycodone.11 The number of patients reporting side effects, however, increased linearly with increasing oxycodone dose, such that most subjects at the highest dose reported side effects including drowsiness, nausea, and vomiting. A similar relationship is seen for other opioids, such as codeine, when given alone or in combination with aspirin, acetaminophen, or NSAIDs. As a consequence, opioids should be reserved primarily for pain inadequately controlled by preventive strategies and nonopioids, or for patients who cannot tolerate aspirin-like drugs.

Nonopioid analgesics include the salicylates (aspirin and diflunisal), acetaminophen, NSAIDs (ibuprofen, ketoprofen, naproxen, and others), and COX-2 inhibitors. These drugs were formerly thought to have a peripheral mechanism of action, while opioids were thought to act at the level of the CNS. Evidence now refutes this classification scheme, with some nonopioid drugs demonstrating activity in the CNS and opioids having effects in the periphery. In general, given their low side-effect liability, efficacy for inflammatory pain, and safety with administration over a few days, nonopiods should be used preferentially for acute dental pain and as a component of drug combinations for more severe pain. For detailed prescribing information, cautions, and contraindications, practitioners must consult the package insert or official pharmacopeia recognized by the country of practice.

Salicylate, the active form of aspirin, is widely distributed in the body, metabolized mainly in the liver by conjugation, and excreted in the urine mostly as salicyluric acid. The efficacy of aspirin has been shown in innumerable studies; it is equipotent with acetaminophen, more effective than 30 to 60 mg codeine alone, but less efficacious than 400 mg ibuprofen. The most common side effects are epigastric distress, nausea, ulceration, and vomiting. Aspirin should not be given to patients with liver disease, hypothrombinemia, or vitamin K deficiency, nor to patients who are taking anticoagulant drugs. Allergic reactions to aspirin are uncommon but are more frequently seen in persons with asthma, nasal polyps, or a history of allergic reaction to other aspirin-like drugs (including NSAIDs). The relationship between blood levels and therapeutic effect is not direct and no fixed dose, schedule, or dosage form will provide the desired result in all patients. The usual anti-inflammatory and analgesic dose is 650 to 1,000 mg every 4 to 6 hours.