Radiolucent images in the mandibular or max­illary area surrounding the root apices might be a sign of endodontic disease or nonendodontic disease, and might lead to a misdiagnosis of apical periodontitis, particularly when the radio­lucency is associated with an endodontically treated tooth. Thus, a diagnosis involves the establishment of a differential diagnosis (Wood and Goaz, 1991), which should distinguish periapical diseases which have been misdiagnosed as apical periodontitis (Bueno et al., 2008; Estrela et al., 2009c; Faitaroni et al., 2008; Rodrigues and Estrela, 2008).

The periapical inflammation represents a biological answer of natural defense, caused by several etiologic agents (microbial, chemical, physical, and others). The model of the inflammatory response is similar to other parts of the organism. Several studies have discussed factors related to the etiology of posttreatment disease in endodontics: microbial etiologic factors (intraradicular and extraradicular infection—bacteria, fungi) and nonmicrobial etiologic factors (endogenous—true cysts; exogenous—foreign-body reaction) (Nair, 2004, 2006, 2009; Nair et al., 1996, 1999).

Apical periodontitis often appears as a response to endodontic infection, which may lead to inflammatory and immunologic changes of periapical tissues seen on radiographs as bone radiolucencies (Nair, 2004).

The analysis of types and incidence of human periapical lesions in 256 extracted teeth revealed that 35% were periapical abscess, 50%, granulomas, and 15% cysts (9% apical true cysts, 6% apical pocket cysts) (Nair et al., 1996). Radiographic features of the cysts may be similar, with some exceptions (Yoshiura et al., 2003). The location, shape, peripheral sclerosis, expansion, and contents of the lesion are important radiographic features that may help to determine an initial diagnostic hypothesis (Weber, 1993).

The acceptance of endodontic therapeutic pro­tocol to treat a disease has usually been based on pathological and clinical characteristics aided frequently by radiographic exam (Nair, 2004). The periapical reaction is observed by the apical extension of the pulpal aggressor agents. After pulpal necrosis, the environment of the pulpal cavity becomes propitious and ideal to the factors that influence microbial growth and colonization (nutrients, low tension of oxygen, carbonic gas, and the existent interactions). These factors are connected to aggressions and responses, and are related to the microbial pathogenicity and virulence.

The presence and distribution of the microorganisms in infected root canals and their influence as expressive precursors of the inflammatory reactions of the dental pulp and periapical tissues established an important association of cause and effect, better defining some parameters of responses to different aggressor agents (Nair, 2004, 2009; Nair et al., 1996, 1999). The dynamic existent between microorganism, virulence, and organic response led to further research that resulted in more comprehensible and convincing explanations and definitions about the intimate relation between microbiology and pathology. The microorganisms represent an important role in the establishment of the periapical lesion (Estrela and Bueno, 2009).

The inflammatory diseases of the periapical region are influenced by the pathogenic characteristics, by the number of aggressor microorganisms (gifted with the respective virulence armory) that invade this area, associated with the dynamic of responses of the host. This interaction between microorganisms and host’s responses determines the different types of periapical alterations.

Considering that the diagnostic hypothesis of periapical alterations have been made on the basis of the clinical evidences and the difficulties of correlation with possible histopathological events, the classification adopted was based on the clinical context and structured according to the treatment (Estrela and Bueno, 2009) (Figure 21.1). Periapical bone radiolucencies might be a sign of endodontic or nonendodontic lesion. In this chapter, several aspects related with periapical radiolucencies from endodontic origin based on cone beam computed tomography (CBCT) technology will be analyzed. 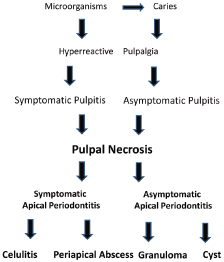 The diagnosis of apical periodontitis represents an essential strategy to determine the selection of an effective therapeutic protocol for endodontic infection control. Apical periodontitis is a consequence of root canal system infection, which can involve progressive stages of inflammation and changes of periapical bone structure, resulting in resorption identified as radiolucencies in radiographs (Nair et al., 1993). Some studies have shown that a periapical lesion from endodontic infection might be present without being radiographically visible (Bender, 1982; Bender and Seltzer, 1961a, 1961b).

The radiographic image corresponds to a two-dimensional (2D) aspect of a three-dimensional (3D) structure (Bender, 1982; Bender and Seltzer, 1961a, 1961b; Van der Stelt, 1985; White et al., 1995). Artificial lesions produced in cadavers can be detected by conventional radiography only if perforation, extensive destruction of the bone cortex on the outer surface, or erosion of the cortical bone from the inner surface is present. Lesions confined within the cancellous bone cannot be detected, whereas lesions with buccal and lingual cortical involvement produce distinct radiographic areas of rarefaction. To be visible radiographically, a periapical radiolucency should reach nearly 30–50% of bone mineral loss (Bender, 1982). Other conditions, such as apical morphologic variations, surrounding bone density, X-ray angulations, and radiographic contrast, also influence radiographic interpretation (Halse et al., 2002). An experimentally induced lesion might or might not be detected, depending on its location. A periapical lesion of a certain size can be detected in a region covered by a thin cortex, whereas the same size lesion will not be seen in a region covered by a thicker cortex. Lesion location in different types of bone influences the radiographic visualization (Huumonen and Ørstavik, 2002). Studies with different diagnostic methods have evaluated the type and incidence of periapical lesions (Laux et al., 2000; Nair et al., 1996). Scientific consensus has been reached to the fact that apical periodontitis is accurately identified by histologic analysis (Laux et al., 2000).

It is important to be aware of the limitations of radiographic assessment as a study method. One of these limitations involves the evaluation of the quality of root canal filling and coronal restoration based on a 2D image of 3D structures. The radiographic appearance of the filled root canal space has been considered a method to evaluate its quality of sealing. Radiographic images have been used to indicate the presence of periapical infection or coronal leakage, consisting of a diagnostic resource often used in dental practice.

Pathological and clinical findings, often supported by radiographs, provide the basis for endodontic therapy. Images, however, are necessary in all phases of endodontic treatment (Estrela and Bueno, 2009). Since the discovery of X-rays by Roentgen in 1895, radiology has witnessed the constant development of new technologies. The angle variations proposed by Clark and the development of panoramic radiography produced novel applications in endodontics.

The therapeutic protocol to treat diseases of endodontic origin has routinely been based on the evaluation of pathologic and clinical characteristics frequently complemented by radiographic findings. Radiographic imaging is the most commonly used diagnostic resource in endodontic diagnosis and treatment, and image distortions constitute a serious inconvenience.

The knowledge of prevalence and severity of apical periodontitis is often based on periapical radiography, whose accuracy has been questionable. Therefore, considering the limitations of conventional radiography for detection of periapical bone lesions, and with advanced imaging methods, CBCT might add benefits to endodontics and offer a higher quality of diagnosis, treatment planning, and prognosis.

The likelihood that apical periodontitis exists and is not identified by periapical or panoramic radiographs is considerably high (Figure 21.2). The difficulty to accurately detect apical periodontitis has been mentioned elsewhere (Bender, 1982; Huumonen and Ørstavik, 2002; Ørstavik et al., 1986). One important aspect to be considered is that it is necessary to have approximately 30–50% of mineral loss in order to visualize apical periodontitis (Bender, 1982; Bender and Seltzer, 1961a, 1961b). Morphological variations of the apical region, bone density, X-ray angulations, radiographic contrast, and actual location of the periapical lesion will influence the radiographic interpretation (Halse and Molven, 1986; Halse et al., 2002; Molven et al., 2002). 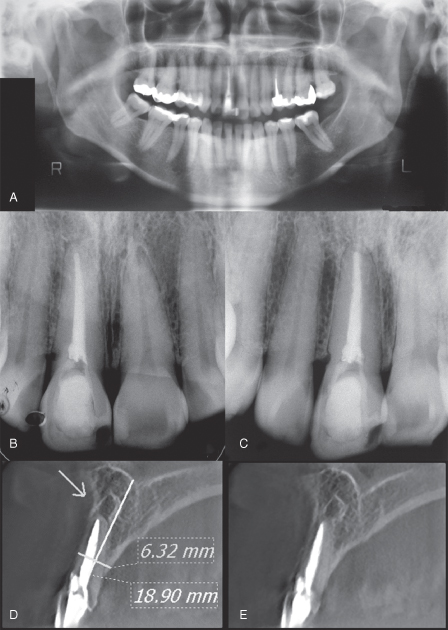 The limitations of radiographic assessment as a study method should not be overlooked, as they to reduce false-negative results. In view of the limitations of periapical radiography to visu­alize apical periodontitis, a review of epidemiologic studies should be undertaken considering the quality of periapical aspects offered by CBCT images. In addition, it will certainly reduce the influence on radiographic interpretation, with minor possibility of false-negative diagnosis. Apical periodontitis prevalence in endodontically treated teeth, when comparing the panoramic and periapical radiographs and CBCT images, was 17.6%, 35.3%, and 63.3%, respectively, in the study reported (Estrela et al., 2008b). A considerable discrepancy can be observed among the imaging methods used to identify apical periodontitis.

The truth is that most dentists do not have CBCT equipment in their dental offices. Thus, during endodontic treatment, it is important to choose a radiographic technique that minimizes image distortions, such as the cone parallel technique, to obtain a high level of reproducibility and increase the diagnostic accuracy of the imaging method.

The use of conventional radiographic images for detection of apical periodontitis should be done with care because of the high possibility of a false-negative diagnosis. A great advantage of using CBCT in endodontics refers to its usefulness in aiding in the identification of periapical lesions and in a differential diagnosis using a noninvasive technique with high accuracy.

Periapical Index Based on CBCT

It is natural that a new device with advanced potential to aid in diagnosis such as CBCT brings with it some challenges until we gain a better understanding of its properties and limitations. Developing new software could be valuable in the acquisition and reconstruction of CBCT scans.

Previous studies (Brynolf, 1967; Ørstavik et al., 1986; Reit and Grøndahl, 1983) have referred to the periapical index (PAI) as a scoring system for radiographic assessment of apical periodontitis. The PAI represents an ordinal scale of five scores ranging from no disease to severe periodontitis with exacerbating features, and is based on reference radiographs with confirmed histological diagnosis as originally published by Brynolf (1967). Ørstavik et al. (1986) applied the PAI to both clinical trials and epidemiological surveys, and it may be transformed into success and failure criteria by defining cutoff points on the scale for a dichotomous outcome assessment (Huumonen and Ørstavik, 2002).

Therefore, with the possibility of detection of apical periodontitis by using new emerging 3D imaging modalities, the development of a new periapical index (Estrela et al., 2008a) was suggested when using CBCT technology.

Thus, a new periapical index (Estrela et al., 2008a) was recently proposed based on CBCT for identification of apical periodontitis. The CBCT periapical index (CBCTPAI) was developed based on criteria established from measurements corresponding to periapical radiolucency interpreted on CBCT scans. Radiolucent images suggestive of periapical lesions were measured using the working tools of Planimp® software on CBCT scans in three dimensions: buccopalatal, mesiodistal, and diagonal. The CBCTPAI was determined by the largest lesion extension. A 6-point (0–5) scoring system was used with two additional variables: expansion of cortical bone and destruction of cortical bone (Table 21.2, Figures 21.3–21.5). A total of 1014 images (periapical radiographs and CBCT scans) originally taken from 596 patients were evaluated using the CBCTPAI criteria (Table 21.2). Apical periodontitis was identified in 39.5% and 60.9% of cases by radiography and CBCT scans, respectively. 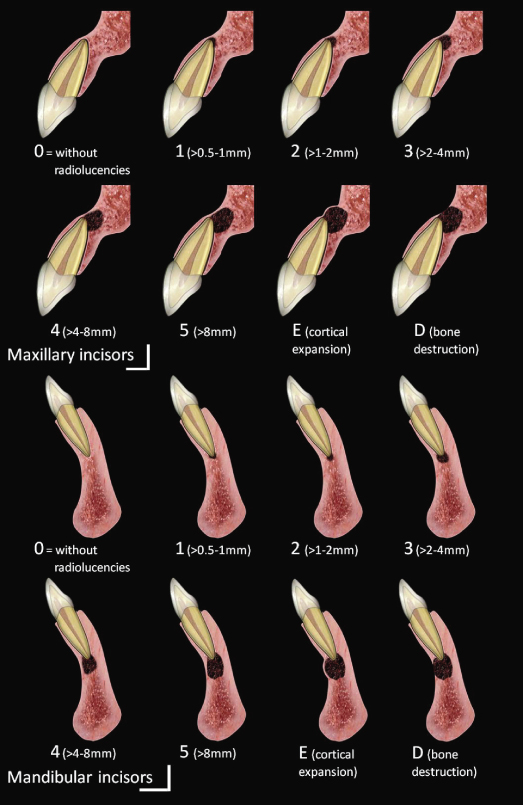 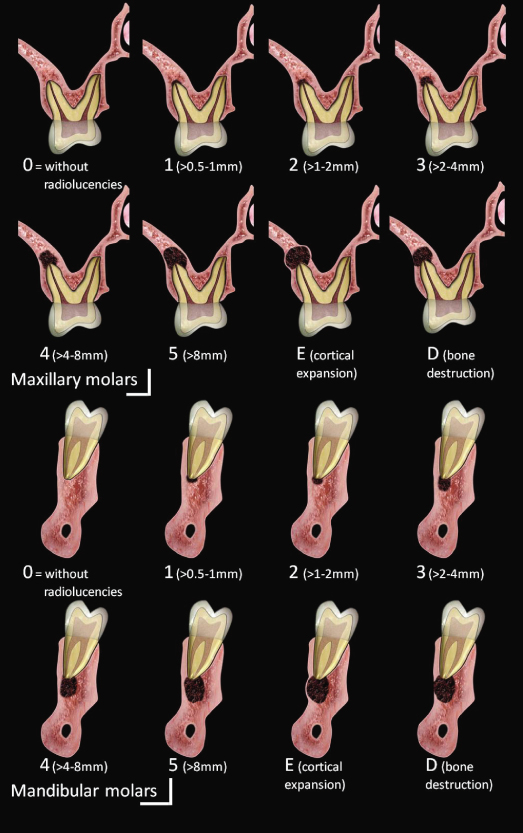 Figure 21.5 Clinical case of mandibular molar showing the axial (A), sagital (B), and coronal (C) planes. The CBCTPAI was determined by the largest extension of the lesion. (Estrela et al., J Endod 2008a).

The CBCTPAI offers an accurate diagnostic method for use with high-resolution images, which can reduce the incidence of false-negative diagnosis, minimize observer interference, and increase the reliability of epidemiological studies, especially those referring to apical periodontitis prevalence and severity.