The standard radiographic views which are fundamental to orthognathic surgery planning consist of a panoramic screening radiograph, for example, an orthopantomogram, and a lateral skull radiograph taken in a cephalostat. In addition the posteroanterior skull radiograph may be used in cases where there is clinical evidence of asymmetry. More detailed radiographs, for example, long cone periapical views or an upper standard occlusal radiograph may be taken for clarification of specific areas of pathology. It is not uncommon for surgical patients to have previously undergone some form of orthodontic treatment and therefore it is important to ensure that the roots of the teeth are perfectly sound.

Cephalometric analysis is helpful in establishing the relations of:

In order for these measurements and relationships to be meaningful it is important that the radiograph is taken in a standardised centric relation position (retruded contact position) with the patient’s Frankfort Plane (the line from the lower border of the orbital rim to the upper border of the cephalostat ear post) horizontal. It is also important to ensure that the soft tissues are at rest when the radiograph is recorded.

Modern radiological guidelines require that intensifying screens should be used and that the radiographic beam has undergone appropriate collimation so as to avoid excessive exposure of structures considered unnecessary in the planning process.

A sheet of clear, matt acetate paper is fixed securely with adhesive tape to the lateral skull radiograph placed on a horizontal viewing box. The radiographic image is enhanced by tracing in a darkened room with any peripheral light from the viewing box masked off. Many operators will have their preferred landmarks and analyses but the following outlines and points are commonly registered (Figure 2.1). 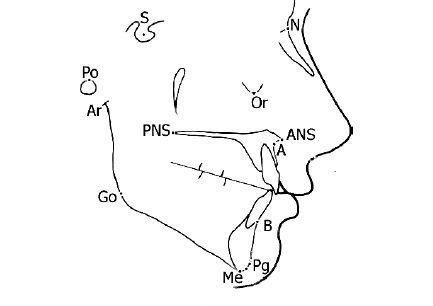 The following lines are then drawn (Figure 2.2): 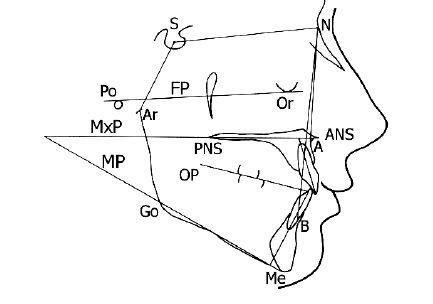