In the simplest terms, the temporomandibular joint is the articulation between the upper and lower jaws. The teeth form the contacts between the upper and lower jaws and the muscles are the motors that move the mandible. This system is unique in that the TMJs are paired; any stimulus that affects one joint or any other single part of the articulatory system can have a ‘knock-on effect’ in the rest of the system.

It is important to have an understanding of anatomy not only to be able to differentiate between what is physiological and what is pathological, but also to understand the objectives of some treatment options.

The TMJ (Figure 2.1) is a synovial diarthrodial joint, which means that the joint is lubricated by synovial fluid and the joint space is divided into two separate compartments by means of an intra-articular disc. The movements that take place in the compartments are predominantly a sliding movement in the upper joint space between the upper surface of the disc and the inferior surface of the glenoid fossa, and a rotational movement in the lower joint space between the head of the condyle and the undersurface of the intra-articular disc. Unlike the articular surfaces of other synovial joints, where the surfaces are typically lined by hyaline cartilage, the articular surface of the TMJ is covered by a layer of fibrocartilagenous tissue. It was thought that this arrangement reflected a non-load bearing functional role for the TMJ; however, a more likely explanation is that, because the covering layer of the condyle is derived from intramembranous ossification, rather than endochondrol ossification, it therefore lacks the endochondrol template from which hyaline articular cartilage is derived. 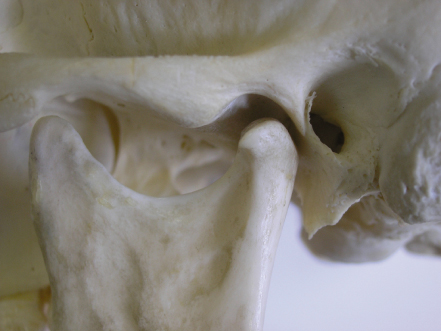 There are four distinct layers or zones described in the articular surface of the condyle and mandibular fossa. These layers are the articular zone, proliferative zone, cartilagenous zone and calcified zone (Figure 2.2):

1. The articular zone is dense fibrous connective tissue and forms the outer functional surface of the condyle head. As a result of this fibrous connective tissue layer, it is suggested that it is less susceptible to the effect of ageing and breakdown over time. In addition, despite a poor blood supply, it has a better ability to repair, good adaptation to sliding movement and the ability to act as a shock absorber when compared with hyaline cartilage.

3. The cartilagenous zone contains collagen fibres arranged in a criss-cross pattern of bundles. This offers considerable resistance against compressive and lateral forces but becomes thinner with age.

4. The calcified zone is the deepest zone and is made up of chondrocytes, chondroblasts and osteoblasts. This is an active site for remodelling activity as bone growth proceeds.

Figure 2.2 The four distinct zones described in the articular surface of the condyle and mandibular fossa. 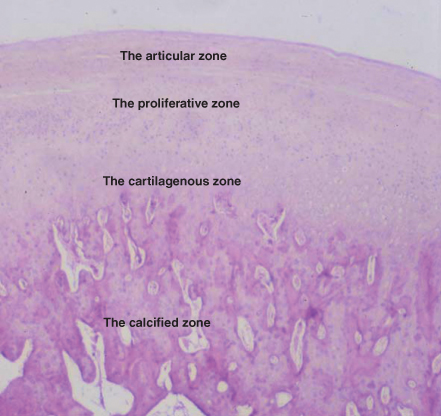 The joint capsule (Figure 2.3) envelops the articular disc and is attached superiorly to the rim of the glenoid fossa and articular eminence and inferiorly to the neck of the condyle. Posteriorly it is attached to the bilaminar zone and anteriorly becomes continuous with the pterygoid muscle attachment. Although it is thin both anteriorly and posteriorly, it is strengthened laterally by the lateral temporomandibular ligament which is not a discrete ligament but a thickened part of the capsule. 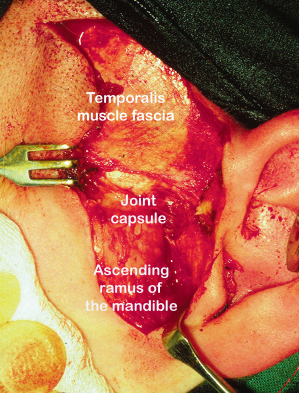 The function of the synovial membrane is considered to be:

Synovial fluid is a clear, pale-yellow, viscous solution secreted by the synovial tissues and consists mainly of an ultrafiltrate of plasma enriched with a proteoglycan-containing hyaluronic acid synthesised by synovial cells. The high viscosity of this fluid is a result of the presence of sodium hyaluronate which provides lubrication. The synovial fluid also allows removal of degradation products from the joint space, lubrication of the joint surfaces and nutrition of the vascular parts of the joint.

The temporomandibular ligament is a strong band of fibrous tissue originating as a thickening of the lateral aspect of the joint capsule. It starts at the root of the zygoma and passes obliquely towards the posterior margin of the neck of the condyle, blending into the joint capsule. In the rest position this ligament is relaxed but it is thought that, during retrusive and protrusive movements of the condyle, it limits movement in an anteroposterior direction.

This is considered as an accessory ligament. It is a specialised band of cervical fibrous tissue extending from the styloid process to the medial border of the mandible at its angle (Figure 2.4). The function of this ligament is not clear but it is thought to limit anteroposterior movements of the mandible.

Figure 2.4 The position of stylomandibular ligament. 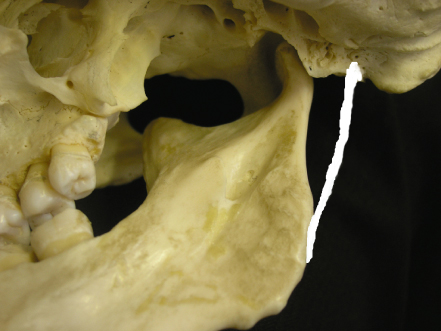 This ligament is also considered to be accessory. It comprises a flat band of fibrous tissue originating from the spine of the sphenoid bone, and passes down to its insertion at the inferior margin of the mandibular foramen (lingula) (Figure 2.5). Again its function is not certain but it is thought to limit lateral condylar movements.

Figure 2.5 The position of sphenomandibular ligament. 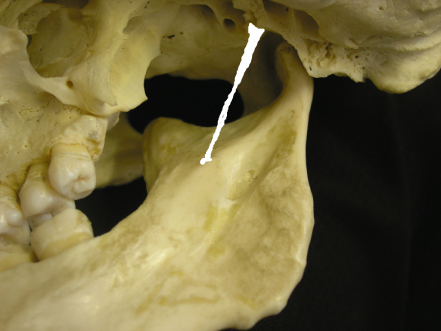 55 years ago, Rees described the intra-articular disc as being like a ‘school-boy’s cap’. It is an oval-shaped tense sheet of fibrous tissue with a concave inferior surface sitting on the head of the condyle (Figure 2.6). On its posterior aspect it has a convex upper surface; it becomes saddle shaped on its anterior aspect. It overlays the condylar head, and blends medially and laterally with the capsule. It is also attached to the medial and lateral poles of the condyle and anteriorly to the superior pterygoid muscle. This structural arrangement, as it is interposed between the head of the condyle and the glenoid fossa, divides the joint into the upper and lower joint spaces. 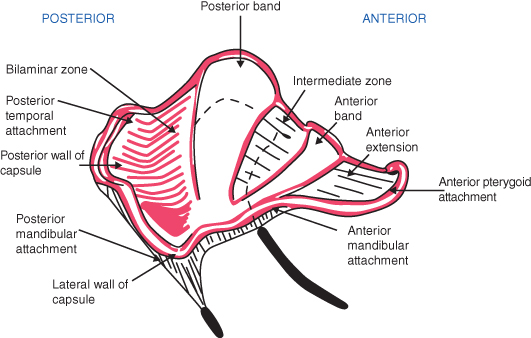 There are four zones of the disc:

1. The anterior band which is of moderate thickness but narrow in an anteroposterior direction

2. The intermediate band, which is the thinnest zone of the disc

3. The posterior band, which is both the thickest and the widest transverse zone of the disc

The disc is attached anteriorly to the margin of the articular eminence superiorly and to the articular margin of the condyle inferiorly. Posteriorly the disc is attached to the glenoid fossa and squamotympanic fissure (elastic attachment) and to the distal aspect of the neck of the condyle (fibrous attachment). This is termed the ‘posterior bilaminar zone’. Medially and laterally the meniscus blends with the capsule. The disc is also attached to adjacent muscles, namely the lateral pterygoid (anteriorly) and masseter and temporalis muscles (laterally). The fibres of the lateral pterygoid muscle merge with the disc anteriorly to form its true insertion. The connections with the masseter and temporalis muscles are less strong, consisting of fibrous bands of thickened tissue at right angles to the direction of the muscle fibres.

This varying thickness of the bands in the disc is significant when considering the functional anatomy of the joint. The meniscus is flexible and able to alter shape to concave or convex during forward movement of the condyle, because of the thinner intermediate zone between the two thicker anterior and posterior zones.