11 My Teeth Are Worn

My Teeth Are Worn

Jonathan is a 48-year-old barrister. He has a very busy, pressurised and stressful job. He is not a regular dental attender because he finds it very difficult to set aside time for routine appointments and tends to come in for advice only when he has a problem. He is very conscious of his appearance because he spends a lot of time in court and feels that he is ‘on show’. Over the last 2–3 years he has been very conscious of the fact that his teeth are wearing. He thinks that the appearance of his teeth is embarrassing and is also aware of the fact that the lower third of his face feels over-closed. He was conscious of wear of his upper and lower incisor teeth.

He has generalised sensitivity to sweet and cold, and he has recently lost two mesioincisal restorations in his upper central incisors. This has prompted him to seek treatment today. He said that he started noticing wear in his teeth about 6 or 7 years ago and it has become much worse over the last 2–3 years.

There is no adverse medical history, he is not under the care of his doctor and he takes no medication. There is no history of gastric reflux or of vomiting. He is a smoker and a fairly heavy drinker consuming 35+ units of alcohol per week.

He has no history of facial pain but did volunteer that he got occasional discomfort from his left jaw joint and from the left side of his face. He said he thought that his bite had altered. He did not know whether or not he ground or clenched his teeth but he suspected that he did not because his wife had never told him that she had been disturbed by him doing this at night. You asked if he would be interested in keeping a diet sheet but he was resistant of this idea and told you with some impatience that he had ‘no time for that sort of thing’. His concerns were solely aesthetic (Figure 11.1). 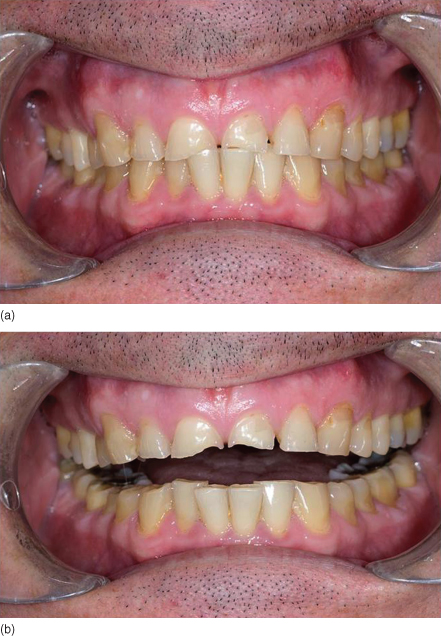 Jonathan has an Angle’s class I, basal bone and incisal relationship. He has a normal range of mouth opening in the vertical and lateral dimensions, being able to open to 47 mm vertically and to move his mandible 12 mm to both the right and the left sides. When you examined the pathway of opening this was straight, indicating that both joints were working synchronously. There were no joint sounds, neither clicking nor crepitation. On examination intraorally you noticed very marked ridging of the buccal mucosa on both the right and the left sides, and there was obvious scalloping of the lateral border of the tongue. There was marked attrition involving upper and lower anterior teeth, the canines and the molar teeth, where enamel had been lost to the extent that the dentine was exposed (Figure 11.2). He appeared over-closed with a free-way space that you estimated to be about 5 mm. 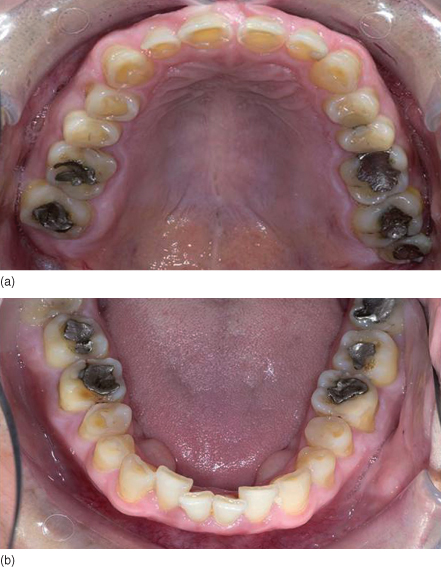 On examination of the TMJs, the left TMJ was tender on lateral and intra-auricular palpation, and the left masseter and temporalis muscles were tender to palpate but only mildly so.

On examination of the soft tissues, the BPE in all six sextants surprisingly was 3 although his oral hygiene appeared satisfactory.

On examination of the teeth, there was generalised tooth surface loss. Mesial incisal bonded composite restorations had been lost from both upper central incisors.

You got the impression that this patient was not particularly interested in his overall dental condition or the causative factors of his toothwear. What he was interested in was an aesthetic ‘makeover’ to improve the appearance of his teeth, and for you to do something about his perceived loss in vertical height in the lower third of his face, thereby restoring his facial contours.

Radiographic examination showed there to be no primary or recurrent caries but there was evidence of early horizontal bone loss in all four quadrants.

When considering your diagnosis, you felt that it was important to discuss the possible causes of tooth surface loss. Despite the multifactoral aetiology of tooth surface loss, certain clinical features may suggest that the major contributory factor to surface loss could be due to acid attack on dentine (erosion). When erosion affects the palatal surfaces of upper maxillary teeth there is often a central area of exposed dentine surrounded by a border of unaffected enamel (cupping).

Your initial advice was to suggest construction of an occlusally balanced centric relation stabilisation splint. This would have two functions: first of all, to act as a habit breaker to discourage his parafunctional activity and prevent further damage to his teeth and, second, as a diagnostic measure to try to establish an increased vertical height with which he would be comfortable. This would give you some treatment plan for working towards restoration of his occlusion.

He refused this treatment suggestion and, on reflection, you realised that he would not wear a splint even if it were provided for him.

You discussed his diet and, although he would not commit to completing a diet sheet, he said that he drank very few acidic drinks but did admit to consuming over 5 units of alcohol a day on average. He did not drink fizzy drinks. Other possible intrinsic causes of erosion include reflux and vomiting but he denied this.

In view of the complexity of his treatment, his high demands and the fact that he would not wear a stabilisation splint, you would not have been able to confirm an acceptable increase in vertical dimension.

Tags: Temporomandibular Disorders A Problem-Based Approach
Jan 8, 2015 | Posted by mrzezo in Occlusion | Comments Off on 11 My Teeth Are Worn
Premium Wordpress Themes by UFO Themes
WordPress theme by UFO themes