16: The Use of Skin Grafts with Local Flaps

The Use of Skin Grafts with Local Flaps

Cutaneous defects of the medial cheek frequently extend to the nose, crossing the aesthetic borders of the alar-facial or nasofacial (cheek–nasal sidewall junction) sulcus. For defects involving more than one aesthetic facial region, reconstruction with a single cutaneous flap may result in blunting or obliteration of the boundary lines that topographically separate the regions. This may lead to a suboptimal outcome. This is especially true of concave boundary lines between the nose, cheek, and lip. The concomitant use of a full-thickness skin graft and a local flap to repair these types of defects will separate the reconstruction into two distinct regions of healing and may prevent blunting of aesthetic boundaries. The skin graft is usually used to resurface the nasal component of the defect, and an advancement flap is used to repair the cheek component of the defect.

A full-thickness skin graft can also be combined with a local flap in other ways. For instance, a flap of subcutaneous tissue or muscle can be transferred to fill a soft tissue void. A skin graft is then placed over the flap to provide an epithelial cover for the repair. This technique is used to repair small but deep defects of the lateral alae. Another situation in which a local flap may be combined with a skin graft is for reconstruction of large facial cutaneous defects that cannot be repaired with a local flap alone or when excessive wound closure tension will occur if a local flap is used by itself. Skin grafts may also be used to cover the secondary defect resulting from transfer of a local flap; an example of this is use of a graft to repair the donor site of an intranasal bipedicled vestibular skin advancement flap or a scalp flap. Using skin grafts to close secondary defects rather than allowing the wound to granulate reduces wound contraction.

There are four types of pivotal flaps: rotation, transposition, interpolated, and island.1-3 All pivotal flaps are moved toward the defect by pivoting the flap around a fixed point at the base of the pedicle. Except for island flaps skeletonized to the level of their nutrient vessels, the greater the arc of pivot, the shorter is the effective length of the flap (see discussion in Chapter 6). Thus, pivotal flaps must be carefully designed to accommodate this reduction in length. As the flap turns in an arc around its relatively fixed pivotal point, redundant tissue, known as a standing cutaneous deformity (dog-ear), develops at the base. Similar to the effective length of the flap, there is a positive correlation between the degree of pivoting of the flap and the size of the standing cutaneous deformity that forms. The greater the pivot, the larger the deformity. Thus, increasing the flap’s pivot will change the flap’s shape, shorten its effective length, and deform the flap’s base from development of a standing cutaneous deformity. To limit these restricting factors, a flap’s arc of pivot should not exceed 90° whenever possible. In addition to the development of larger standing cutaneous deformities as a pivotal flap turns on its base, the larger the size of the flap, the larger in surface area is the deformity for a given pivotal arc. For large pivotal flaps, this deformity can be of sufficient size to allow its excision and use as a full-thickness skin graft to assist the resurfacing of a portion of a cutaneous defect.

Pivotal flaps are highly versatile and can be used to repair many types of facial cutaneous defects. Whereas a pure pivotal flap turns in an arc at its base and is not stretched, most pivotal flaps have some component of advancement. Provided the flap is the same size as the defect, it is the advancement that can cause an increase in wound closure tension and distortion of surrounding facial structures. It is in these situations that the addition of a skin graft can be beneficial. The combined use of pivotal flaps and full-thickness skin grafts is usually reserved for repair of very large defects in instances in which the use of a skin graft is necessary to prevent excessive wound closure tension. The other instance in which this combination is used is when there is insufficient skin at the flap donor site to close the secondary defect.

A 52-year-old man presented for excision of atypical junctional melanocytic hyperplasia of the cheek and lower eyelid. This skin abnormality is considered to be at high risk for transitioning to an invasive melanoma. Margins free of disease around the lesion were obtained by the square technique. (See discussion of the square technique in Chapter 8, Case 3.) This resulted in an area requiring resection that measured 4 × 4-cm (Fig. 16-1). The patient’s facial skin was taut and the area of skin excision large relative to the total surface area of the cheek. A rhombic flap was designed for repair of the cheek defect after resection of the lesion. Although the rhombic flap was designed correctly, when the flap was transposed to the recipient site after excision of the skin lesion, excessive wound closure tension was noted. The tension caused a downward pull on the lower eyelid skin, raising concern for retraction or even ectropion of the eyelid. For this reason, a full-thickness skin graft was used to assist with repair. The graft was harvested from the standing cutaneous deformity resulting from pivoting of the flap. The skin graft was positioned between the distal border of the flap and the lower eyelid. This completely relieved wound closure tension, and the wound healed without distorting the eyelid. The proximity of the donor site and the recipient site of the skin graft ensured the best possible skin color and textural match with adjacent facial skin. 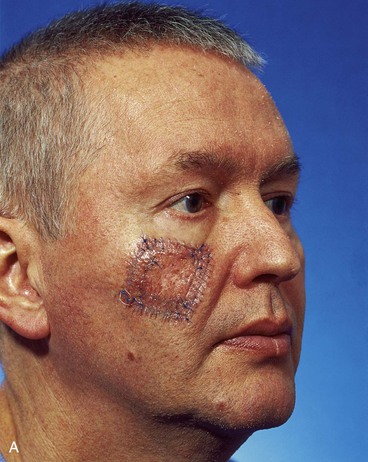 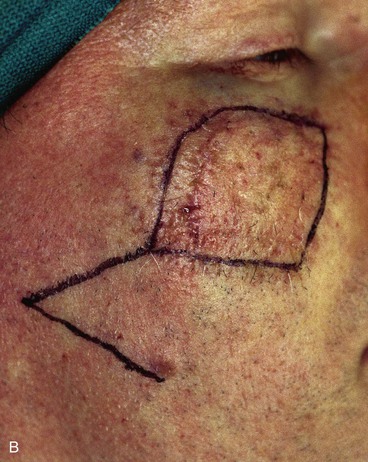 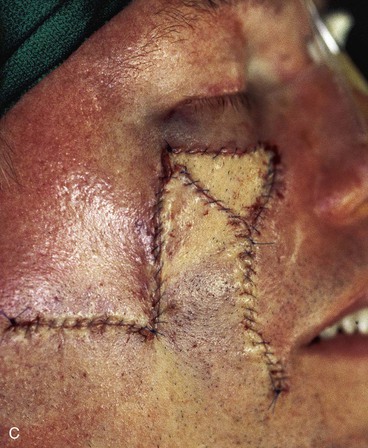 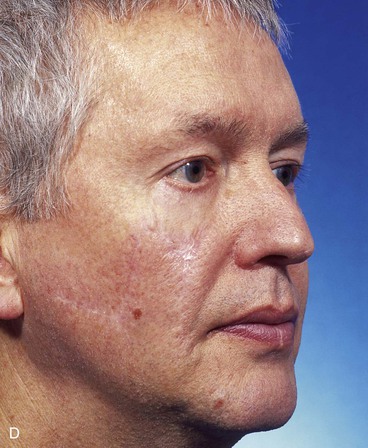 A patient with the same disease as in Case 1 is shown in Figure 16-2. It was necessary to resect a large area of cheek skin in addition to skin of the lower eyelid. In this case, a superiorly based transposition flap was selected for repair to facilitate recruitment of skin for construction of the flap from the jowl area. The jowl region has the greatest skin redundancy of the face. The defect was too large to completely cover with a transposition flap without causing excessive wound closure tension. In this case, such tension was likely to cause lower eyelid retraction or ectropion. To prevent distortion of the lower eyelid, a full-thickness skin graft was used to cover the eyelid component of the defect after resection of the skin lesion. The skin from the standing cutaneous deformity resulting from transfer of the flap (vertical lines of flap marked in Fig. 16-2A) was excised and used as the source for the skin graft. The skin graft served the purpose of reducing overall wound closure tension. It also enabled the use of separate and different skin to reconstruct a defect involving two aesthetic regions of the face, the cheek and eyelid. This in turn facilitated a more distinct topographic separation of the eyelid from the cheek. The skin of the standing cutaneous deformity was non–hair-bearing skin. This skin was also thinner than the skin of the lower face. Both of these qualities made the standing cutaneous deformity of the transposition flap the ideal donor site for the full-thickness skin graft. In this case, the skin graft did not survive completely. As a result, the patient developed a minor ectropion of the lower eyelid. The possible partial or complete failure of the skin graft is one of the disadvantages of combining skin grafts with local flaps to repair facial defects. The other major disadvantage of the combined approach is the possible discrepancy of skin color and texture between flap and graft. However, this is uncommon when the source of the graft is the standing cutaneous deformity formed by the local flap. When skin grafts are harvested from a more distant site, skin color and texture discrepancies are more likely to be observed. 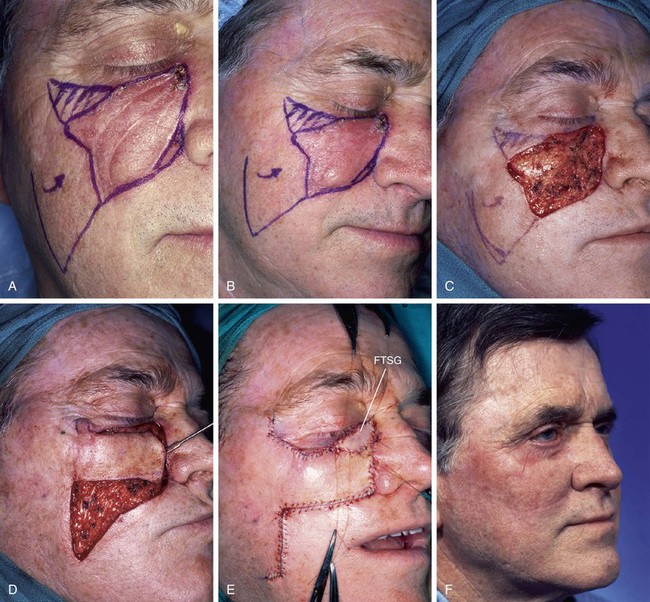 The note flap, a transposition flap originally described by Walike and Larrabee,4 allows the closure of a circular defect with a triangular flap. The design of this flap consists of drawing a line tangent to a border of a circular cutaneous defect and parallel to RSTLs for a distance of 1.5 times the defect diameter. A second line the same length as the diameter of the defect is drawn at 50° to 60° to the first line to create a triangle-shaped flap. The final flap design resembles a musical eighth note when it is drawn. The surface area of the flap is typically 75% of the surface area of the defect. Although ideally the flap is used to repair skin defects smaller than 2 cm, larger defects can be closed with this design. The major disadvantage with larger note flaps, as with most large transposition flaps, is that the standing cutaneous deformity is also larger and requires removal. In addition, the major tension vector is perpendicular to the tangential border of the triangular flap, and it is this force that is magnified with larger flaps. (See discussion of note flaps in Chapter 8.)

A 74-year-old woman with a basal cell carcinoma of the right cheek underwent micrographic surgical excision. The resulting skin defect measured 4 × 2.5-cm. A 5 × 1.8-cm laterally based note flap was designed for repair (Fig. 16-3). In retrospect, the flap was not designed sufficiently large enough to close the wound without excessive wound closure tension. This was a particular problem because of the proximity of the defect to the lower eyelid in an elderly patient with lower eyelid laxity. When the flap was transposed, tension caused the lower eyelid to retract from secondary tissue movement. Thus, in addition to the flap, it was elected to use a 2.5 × 1-cm full-thickness skin graft that was placed between the flap and the inferior border of the eyelid. The skin graft was obtained from the standing cutaneous deformity marked in Figure 16-3A. Figure 16-3B shows the patient 5 days after reconstruction and immediately after the removal of a skin graft bolster dressing and sutures. The skin graft healed completely and perfectly matched the skin color and texture of the flap and adjacent facial skin. Most important, however, was the maintenance of a normal lower eyelid position and contour. This case represents an example of selecting an inappropriate local flap to repair a cutaneous defect. It was fortunate that a major complication (ectropion or eyelid retraction) was avoided. Avoidance of the likely complication of eyelid retraction was made possible by use of a full-thickness skin graft to assist the local flap in reconstruction of the defect.

Rotation flaps are pivotal flaps with a curvilinear configuration. They are designed immediately adjacent to the defect and are best used to close triangular defects. In such instances, the triangular defect is covered by a portion of the standing cutaneous deformity, thus facilitating the pivotal movement of the flap and lessening the need to excise the deformity. The greatest wound closure tension of rotation flaps is at the advancing border of the flap. A back cut at the base of the flap shifts the position of the pivotal point and thus changes the wound closure tension vector as well as the location of the standing cutaneous deformity. There are several advantages of rotation flaps. The flap has only two sides; thus it lends itself to placement of one side in a border between aesthe/>

Tags: Local Flaps in Facial Reconstruction Expert Consult
Jan 14, 2015 | Posted by mrzezo in Oral and Maxillofacial Surgery | Comments Off on 16: The Use of Skin Grafts with Local Flaps
Premium Wordpress Themes by UFO Themes
WordPress theme by UFO themes