This chapter builds upon the information provided in chapter 14 concerning the reflex effects of transient pain and outlines the effects that persistent pain may have on motor function. It especially focuses on the applicability of two major concepts postulated to account for these effects—the vicious cycle theory and the pain-adaptation model—and considers them in the particular context of the jaw musculature.

At the turn of the 20th century, it was thought that common forms of muscle pain were caused by abnormal movement patterns that led to hyperactivity, spasm, fatigue, and pain. Later, Travel1 suggested that chronic muscle pain could be explained if pain itself caused or maintained hyperactivity. Despite the lack of evidence, this suggestion became the pain-spasm-pain or vicious cycle theory of chronic pain and dysfunction (Fig 15-1a). Although really an untested hypothesis, the vicious cycle theory was quickly co-opted to explain the etiology of chronic lower back pain (CLBP), fibromyalgia, myofascial pain, tension-type headaches, and postex-ercise muscle soreness (for review, see Lund et al2 and Stohler3). Many authors adapted the hypothesis to support their belief that almost anything that caused pain in muscles or joints and altered movements or increased muscle activity could initiate temporomandibular disorders (TMDs). They reinforced the idea that conditions such as TMDs have a multifactorial etiology and provided a hypothetic framework for treatments aimed at reducing muscle activity either directly (eg, with biofeedback) or indirectly by correcting “abnormal” anatomy (eg, with occlusal splints, occlusal adjustments, orthodontics, and joint and orthognathic surgery). 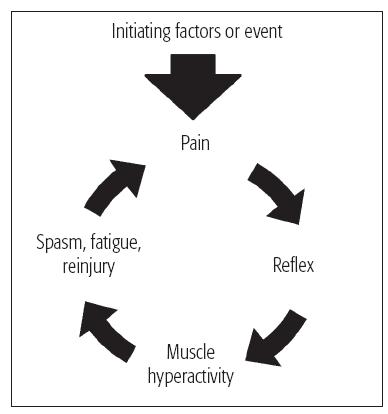 Fig 15-1a The vicious cycle. This diagram shows the painspasm-pain cycle first described by Travel.1 It is based on the concept that activation of muscle nociceptors can lead to chronic pain because activation of nociceptors causes a tonic reflex contraction of all muscles.

The way in which the vicious cycle hypothesis has been incorporated into two philosophic approaches to TMDs is illustrated in Fig 15-1b. Those who emphasize the importance of the dental occlusion consider TMDs are caused by occlusal interferences,4 while advocates of neuromuscular dentistry and craniomandibular orthopedics believe that TMDs arise because the mandible and maxilla are misaligned.5 Both indicate that abnormal dentoskeletal anatomy leads to abnormal patterns of movement and muscular hyperactivity, leading to pain. Once pain occurs, the vicious cycle kicks in. Note that both groups believe that myalgic forms of TMDs can lead to progressive intracapsular pathology via hyperactivity especially of the lateral pterygoid muscle. 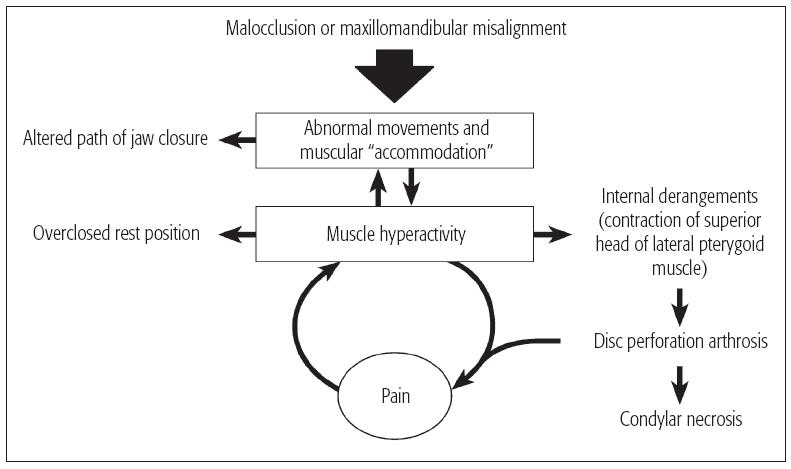 Assessment of pain models based on the vicious cycle

When muscles are voluntarily contracted at high tension for long periods, the fibers begin to fatigue, which causes progressive changes in muscle fiber function. Tension drops, and the electromyographic (EMG) signal shifts to low frequencies of higher mean amplitude. Pain finally sets in, probably because the muscle fibers release algesic metabolites. However, the jaw-closing muscles are inherently resistant to fatigue because even the most rapidly contracting fibers have a high oxidative capacity. Only long-lasting clenching causes pain in the jaw and cranial muscles, and true mechanical fatigue is very difficult to induce.6 The pain goes away quickly once the contraction stops. However, pain can return if exercise was particularly heavy or if muscles were untrained. This postexercise pain is called delayed-onset or postexercise muscle soreness (PEMS). It develops gradually over several hours and then slowly diminishes. The pain is probably caused by inflammation that follows the mechanical breakdown of myofibrils and perhaps connective tissues as well (for review, see Lund et al2 and Stohler3).

Nocturnal bruxers or those with various forms of orofacial myoclonus who awaken with pain in their jaw muscles (see chapter 16) probably suffer from PEMS. On the other hand, many bruxers with badly worn teeth and hypertrophied muscles have no pain. One possible explanation for this is that their jaw muscles have adapted to heavy work.

Although high levels of muscle activity may cause persistent pain, this does not lead to an increase in tonic contraction in the affected muscle as the vicious cycle theory postulates. For instance, when heavy exercise was used to induce PEMS in the biceps, there was no difference in levels of EMG activity recorded before and during pain (for review, see Lund et al2 and Stohler3). The authors of these studies were surprised because the sore arms showed signs usually interpreted as evidence of muscle tension: they were slightly flexed at rest and tense to palpation. The authors speculated that these signs were caused by local edema. This may explain why areas of pain, tightness, taut bands, and trigger points, which are usually assumed to be caused by contraction of muscle fibers, are not regions of high electric activity (for examples, see Jensen et al7 and Peterson et al8).

In addition, pain does not seem to increase muscle activity in bruxism. There is no difference between the levels of resting masseter EMG activity in bruxers with or without pain, although the masseters of bruxers are more active than those of age-matched and sex-matched controls.9 These data suggest strongly that the higher resting activity in bruxers is due to the hypertrophy of the muscles, not to pain.

Many studies have been carried out to see if the muscles of patient groups suffering from TMDs, CLBP, tension-type headache, or fibromyalgia are more active than normal. Although it would be better to discuss the myalgic and arthralgic forms of TMDs separately, this is not possible because they were not differentiated in most publications. To make a proper comparison, EMG activity recorded over painful muscles in patients should be compared to recordings from similar sites in appropriate control subjects. When such comparisons were carried out for fibromyalgia, headache, neck/ shoulder pain, and back pain, the results were very clear: there was no significant difference between the groups in almost all of the published reports (for review, see Lund et al2 and Stohler