Other chapters in this book describe the many recent advances in the search to manage pain. Much of the thinking about the etiology and treatment of chronic pain conditions over the last century has focused on the interrelationship between pain and the motor disability that is a common accompaniment. Movements vary from the most complex, voluntary movements (eg, speech, piano playing) to repetitive rhythmic movements (eg, chewing, swallowing) to the simplest spinal cord and brain stem reflexes. Brain stem reflexes (eg, facial-blink reflexes, jaw-opening reflexes) are used to test the functional integrity of cranial nerve afferent and efferent pathways and to help identify and localize lesions (eg, tumors, infarcts) of the reflex loops or central systems that control them.1,2 This chapter will focus on motor reflex responses to acute orofacial pain and the effects of clinical and experimental pain on the jaw muscle reflexes in particular. Acute orofacial pain can also evoke autonomic reflexes with important physiologic effects (eg, salivary, cardiorespiratory), but these reflexes will not be discussed.

It should also be noted that the jaw-closing muscles are equivalent to the extensors of the legs and arms because they resist the pull of gravity and determine mandibular postural position. The suprahyoid muscles (mylohyoid and digastric) are the jaw flexors (ie, jaw openers). Mastication, like other rhythmic movements (eg, respiration, locomotion), is controlled by a central pattern generator (CPG), which is a primitive neural network that generates a rhythmic motor pattern when driven by tonic inputs from sensory receptors and/or higher centers. In mammals, CPGs are in the brain stem (for mastication, respiration, swallowing) or spinal cord (for locomotion). The CPG for mastication consists of neurons in the brain stem reticular formation, the trigeminal (V) main sensory nucleus, and the spinal subnucleus oralis. When discussing the effects of stimulating nociceptors during chewing, it is important to consider that these neurons produce the rhythm of mastication and generate the bursts of motor neuron activity in the cranial nerve motor nuclei controlling the orofacial muscles (for reviews, see Lund et al3,4).

When nociceptors are suddenly stimulated, reflexes are evoked that tend to remove the affected body part from the source of pain. If you burn your fingers, nociceptor activation causes the flexion-withdrawal reflex that activates arm flexors and inhibits extensors. The jaw-opening reflex (JOR) is the oral equivalent of this response. It is triggered by the stimulation of nociceptors throughout the oral cavity, tooth pulp, jaw muscles, temporomandibular joint (TMJ), and perioral skin, and also by strong activation of orofacial mechanoreceptors, including periodontal mechanoreceptors.Figure 14-1 illustrates this basic pathway in the rabbit and shows that the JOR in animals consists of activation of jaw-opening muscles and inhibition of jaw-closing muscles. Injection of algesic chemicals into the TMJ, muscle, or other orofacial tissues of anesthetized rats can evoke simultaneous increases in the activity of jaw-closing as well as jaw-opening muscles.6,7 However, in humans, the JOR is essentially inhibition of jaw-closing muscles with little evidence for excitation of jaw-opening muscles. The sudden cessation of the jaw-closing movement during biting and chewing happens before we know it. The JOR is usually self-activated by biting on something hard or sharp, on a cracked or abscessed tooth, or on the tongue (see Fig 14-1). Noxious stimulation of the tongue reflexly evokes tongue retraction at the same time as the JOR, to remove it from the source of damage. 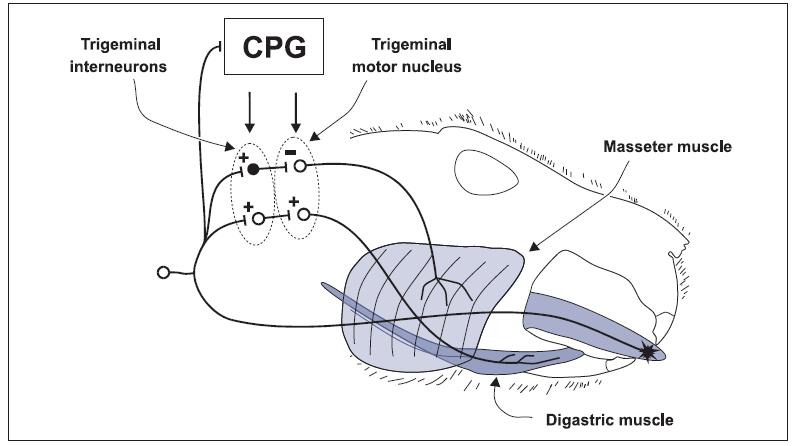 Fig 14-1 Effect of biting the tongue during mastication. A noxious stimulus to the tongue activates mucosal nociceptors; action potentials are conveyed to the V subnucleus caudalis (Vc), to higher centers for pain perception, and to interneurons. For the JOR, there are two types of interneurons: excitatory interneurons (open circle) that cause excitation of digastric motor neurons and inhibitory interneurons (filled circle) that cause inhibition of jaw-closing motor neurons (only masseter is shown). Tongue reflexes can also be evoked by the noxious stimulus. The CPG for mastication influences the excitability of the interneurons and α-motor neurons. + = excitatory synapse; – = inhibitory synapse. Reprinted with permission from Lund.5

During biting and chewing, the brain receives a barrage of information from many orofacial mech-anoreceptors: mucosal, periodontal, muscle, and joint. With the jaw at rest, such non-noxious afferent activity can evoke the JOR, but if the JOR were activated during the closing phase of mastication, it would be impossible to close the jaws. This is one example of why reflex responses have to change drastically during movement. Animal experiments have revealed that the masticatory CPG can inhibit JOR interneurons that are supplied by non-noxious afferents8 (Fig 14-2), which explains how we can chew through food without evoking an unwanted JOR. However, the CPG cannot simply shut down the JOR during mastication because the JOR is needed to protect against self-injury (see Fig 14-1). In fact, when orofacial nociceptors are activated during jaw closing, the jaw-closing muscles are strongly inhibited very quickly. This, together with a large digastric response, suddenly cuts short the closing phase and minimizes tissue damage. All this is driven by the masticatory CPG that facilitates the nociceptor interneurons in the JOR circuits during the jaw-closing phase. It is very unlikely that nociceptors will be stimulated during jaw opening; this is why the reflex response during opening is small (see Fig 14-2). 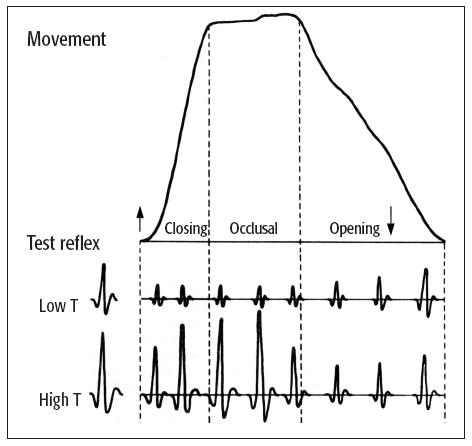 Fig 14-2 Modulation of the JOR during mastication. The low threshold (T) test reflex response is the control JOR response in the digastric muscle evoked by activation of low-threshold (ie, non-painful) orofacial afferents when there is no chewing. During the closing phase of the chewing cycle, the masticatory CPG depresses the response from nonpainful afferent activation—note the reduced size of the JOR during closing and occlusal phases. In contrast, the JOR evoked by the stimulation of nociceptive afferents (high T) is actually enhanced during the closing phase of chewing. There is also a corresponding marked inhibition of the jaw closers. Therefore, during jaw closing and chewing, the system has a hei/>