Fig. 13.1. Example of hypothetical data collected with 30-second MTS across five observation periods and plotted in a line graph. 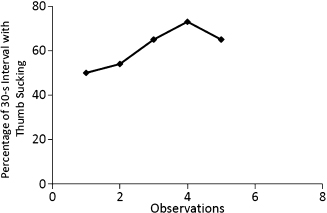 Because thumb sucking often occurs only when the child is alone, it may be necessary to observe the behavior surreptitiously while the child is alone (e.g., via video, through an observation window, or during unannounced checks; Friman, Barone, & Christophersen, 1986; Long et al., 1999b; Rapp et al., 1999). For example, Rapp et al. (1999) placed a video camera in the family room of the child’s home to record thumb sucking because the parents reported that the child typically sucked his thumb while watching television there. Videotaped observations can be scored using either CDR or MTS methods, although CDR is preferred as the more rigorous method.

Even though thumb sucking is likely to be automatically reinforced, it is nonetheless important to conduct a functional assessment to identify or rule out any possible social reinforcement for the behavior. A functional assessment, typically conducted through interview or direct observation, identifies the antecedents and consequences associated with the behavior (Lennox & Miltenberger, 1989; O’Neill et al., 1997).

Iwata and Dozier (2008) provided guidelines for conducting multiple forms of brief functional analysis. Given that thumb sucking often is assumed to be automatically reinforced, it can be measured during three to six 10-minute sessions wherein no social interaction is provided to the child. If the behavior occurs at high, stable levels across sessions, the function of the behavior is confirmed and an intervention can be initiated. Figure 13.2 depicts hypothetical data collected with 30-second MTS wherein thumb sucking decreased without social consequences (upper panel) and persisted without social consequences (lower panel). As noted earlier, most studies show that thumb sucking is an automatically reinforced behavior. Nevertheless, if the behavior decreases across the no-interaction sessions, it suggests that thumb sucking is maintained by social consequences, and additional test conditions are needed (Iwata & Dozier, 2008). In a functional analysis test condition, the potential reinforcing consequence is delivered for each instance of the behavior (e.g., attention, escape from a task), and in a control condition, that reinforcer is given freely with no consequence delivered for the behavior. In the event that it is necessary to compare levels of thumb sucking in a test and control condition, practitioners should conduct at least three sessions with each condition to avoid false positives (Kahng & Iwata, 1999; Hanley, Iwata, & McCord, 2003; Bartlett, Rapp, & Henrickson, 2011). Figure 13.3 provides an example of a test versus control functional analysis of thumb sucking. The identified function of thumb sucking then dictates the chosen intervention. 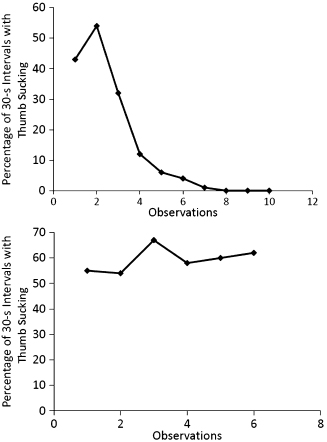 Fig. 13.3. Example of hypothetical results from a brief functional analysis with a test condition (contingent attention) versus a control condition. 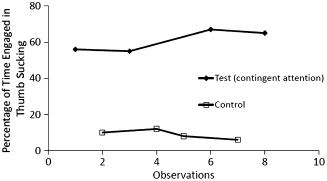 A number of apparatuses, such as oral appliances, splints, gloves, and headgear have been used to physically prevent thumb sucking. Although a number of studies have described the use of oral appliances (e.g., Haskell & Mink, 1991; Viazis, 1991; Gawlik, Ott, & Mathieu, 1995; Greenleaf & Mink, 2003) and headgear (e.g., Taylor & Walker, 1997) as interventions for thumb sucking, few, if any, of these studies employed an experimental design to empirically evaluate treatment effects. In contrast, a number of behavioral studies have experimentally demonstrated that finger or thumb splints (e.g., Lassen & Fluent, 1978; Watson & Allen, 1993), gloves (Lewis, Shilton, & Fuqua, 1981; Ellingson et al., 2000), or taped cotton (Rolider & Van Houten, 1988) decreased or eliminated daytime and nocturnal thumb sucking.

In a representative study from this category, Ellingson et al. (2000) first conducted a functional analysis and determined that the finger sucking of two children, aged 7 and 10 years, occurred almost exclusively when each child was alone. In the second phase of the functional analysis, Ellingson et al. found that finger sucking was either greatly reduced or eliminated when adhesive bandages were worn on the fingers, which suggested that finger sucking produced automatic reinforcement in the form of oral or tactile stimulation. Treatment for both participants involved wearing a glove when each was alone (e.g., watching television, lying in bed). For the 10-year-old, the glove immediately eliminated finger sucking. In addition, fading of the glove was accomplished by systematically cutting off pieces over a 5-month period. In contrast, the 7-year-old continued to suck her finger even when she wore multiple gloves. Ultimately, her finger sucking was eliminated using an awareness enhancement device (AED; see later discussion). Although the glove was only effective for one child, parents of both participants rated the glove intervention as highly acceptable.

One limitation in the use of response prevention strategies should be noted. If the child is able to remove the apparatus (glove, splint, etc.) when the parent is not present, its effectiveness will be diminished. Therefore, the parents will need to monitor the child, perhaps surreptitiously, to insure that the apparatus is not removed.

Mahalski (1983) reported that as many as 50% of children who display thumb sucking also display attachments to transitional objects such as blankets, pillows, and dolls. In many of these cases, the child obtains one of these objects prior to engaging in thumb sucking. For example, Friman (1988) found that a 5-year-old girl only displayed thumb sucking when she was holding a doll; treatment involved simply withholding access to the doll. Follow-up assessment at 6 months posttreatment showed that thumb-sucking suppression was sustained in the absence of the doll.